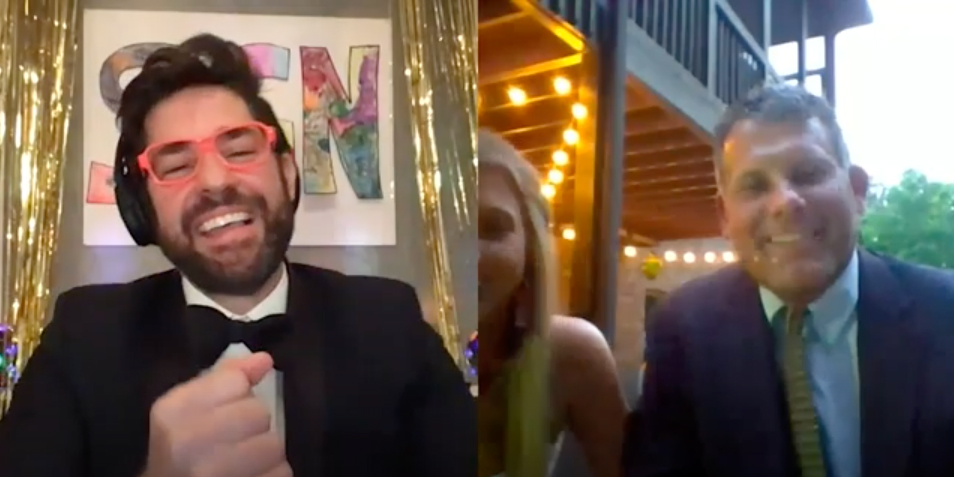 Sunday gave us the fourth episode of John Krasinski’s Some Good News. Those of us who follow the series knew the theme this week was Prom. As an extension of SGN’s “What Did I Miss” segment, John came to realize that many high school seniors would miss their only opportunity to attend Senior Prom (I don’t know if Junior Proms are still a thing, they weren’t in Northern California when I grew up). However, students were close enough and hopeful enough that prom would happen that many had already purchased their attire and faced the living embodiment of “all dressed up and nowhere to go.” So, John set out to do his part and Friday evening, he “hosted” the Class of 2020’s virtual prom. I had not intended to watch but since we were cooking dinner and hanging out at that time, I put it on in the background. I’d thought it would last for hours and mostly be music videos. But it was just about 30 minutes and included Chance the Rapper, the Jonas Brothers, Rainn Wilson and Billie and Finneas Eilish. The show was marred with technical issues, including a vanishing Kevin Jonas, and it was pretty clear John was in over his head, but it was very sweet and I was glad I watched. I was curious, though, if episode four of SGN would merely be a prom replay. It was so much more:

The episode started as it usually does, by honoring those on the front lines. This week, John focused on delivery, grocery and essential workers for the stores and business still open. In addition to acknowledging them, John showed all the fun ways these folks are keeping their spirits high as well as bringing joy to others: 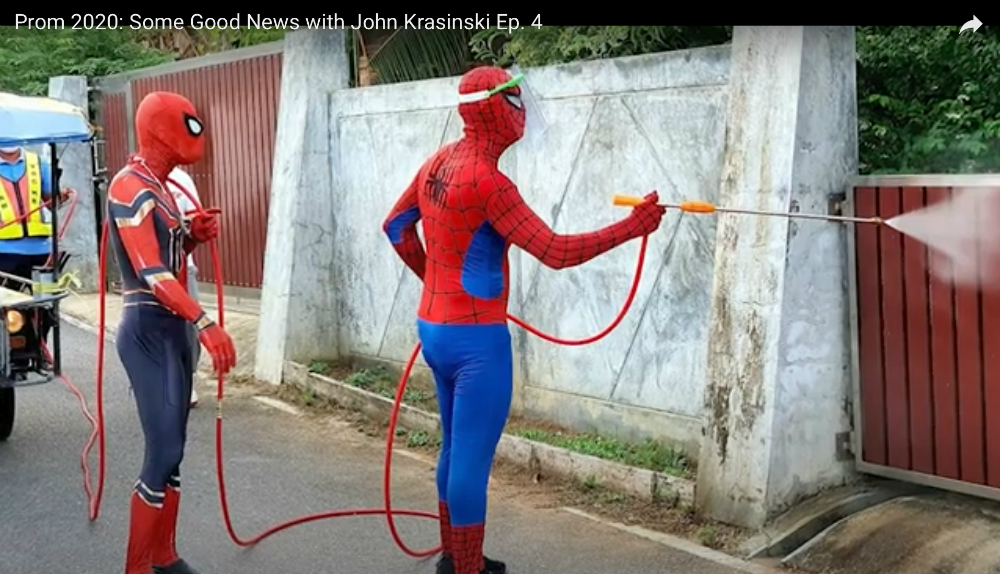 The next segment was another regular feature, a series of lovely events that are going on in the world today, including 100-year-old war veteran, Captain Tom Moore, who set out to raise 1000 pounds by doing laps in his garden, and ended up raising over 20M pounds for NHS charities. 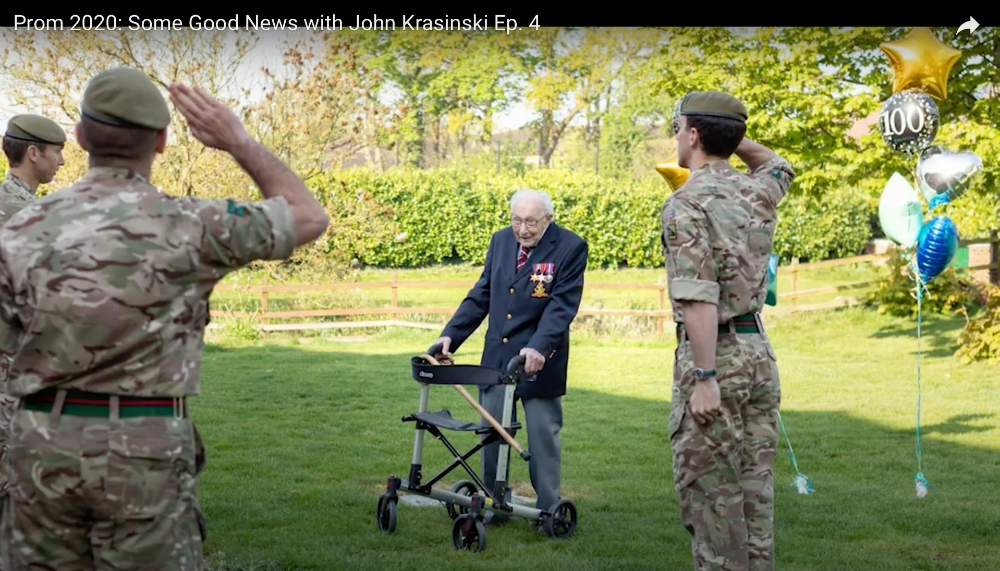 The special guest was introduced at the 5:10 mark. This week will be hard to beat as it was NASA’s International Space Station team reporting and giving tips on how to cope with isolation. Honestly, it was so cool and maybe I’m just more emotional these days but when they said, “this is some good news, the earth is still beautiful. An earth in crisis is still an earth worth returning to,” it made me choke up: 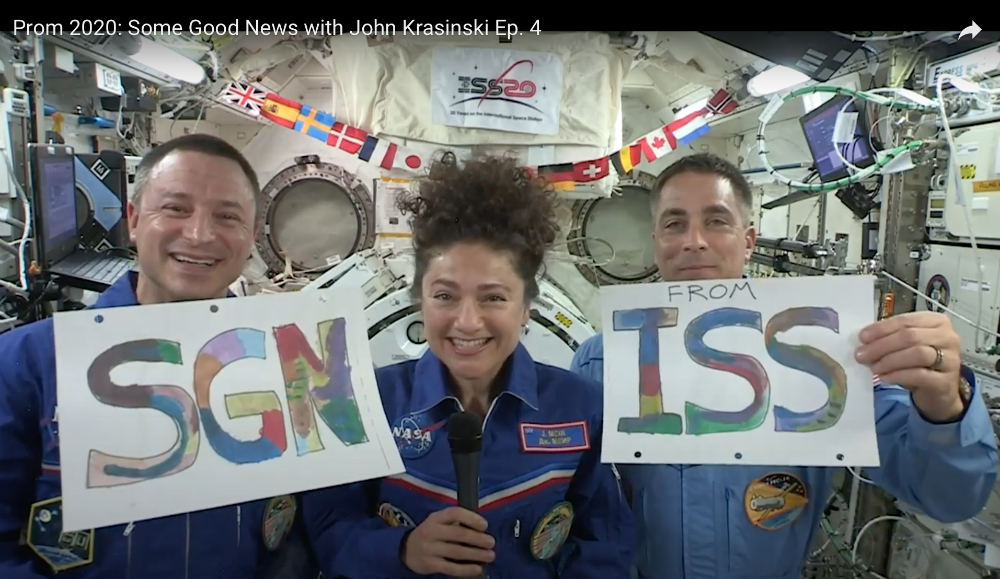 At the 7:04 mark is when John got to his “What am I Missing” segment (which brought us the cast of Hamilton and the Boston Red Sox in past episodes). This week, of course, it was the prom from Friday. John’s guest correspondents were Alabama senior Marli Odgers and her father, Robbie, who inspired John to throw the prom in the first place when they posted a clip of Robbie inviting Marli for one dance, all decked out, in their living room:

However, this wasn’t just a recap of Friday’s prom footage. At 9:24 into the video, John played a series of clips of him prepping for the prom, including setting up his office (probably took notes from Paris Hilton), video preps with all his guests (in which both Emily Blunt and Sophie Turner make cameos). At the 10:03 mark, John played his prom footage. But instead of focusing on what he’d already done, he interspersed his recap with prom goers in their prom wear, making their entrances, dancing with their families, one lucky lady was even crowned prom queen! I watched the whole thing live and the shots of the actual students enthusiastically celebrating their virtual prom together across the country was just so lovely. It was a nice touch to make the musical guests the Jonas Brothers and the Eilishes, none of whom had gone to prom themselves. And they all dressed up for it! (Let’s be honest, a sweatshirt and headscarf is what Billie would wear for prom). The show ended with John throwing it to DJ D-Nice who dedicated his Club Quarantine to SGN Prom that night. All-in-all, another injection of good to take us into the week.

During the Eilish intro, Finn genuinely thanked John for the amount of love and attention he’d given the prom. In doing so, he said, “whenever a dad does something that’s super nice and wholesome, it makes me want to cry… No one that isn’t a dad would ever put so much love and care into something so nice for a bunch of 17-year olds. Only dads.” You can see a flicker on John’s face when he thought, ‘wait, I thought I was everyone’s super cool best bud.’ But then John gets that he is acting as our SGN Dad and that’s what we need him to be. Like, that split second, his whole role got redefined and he realized how much more important it was. It’s hard to describe but go back and watch the interaction at the 15:00 minute mark and see if you see it too.

I’d actually intended to post my prom photo in honor of this post, but my mom couldn’t find one to mail me in time. Either that, or that was her gentle reminder that my 1987 prom look was not one of my best. But that’s fine, this isn’t about me, it’s about these folks: