It might have been Jordyn Woods’ birthday, but her fans got a special gift when she and NFL star Karl-Anthony Towns went Instagram official during her celebration in Cabo San Lucas. On Sept. 26, Woods posted photos of the two of them cozying up at the beach with the caption "I found you, then I found me.” Yeah, these two seem to be connecting on a deeply emotional and passionate level, which is pretty much what you’d expect when you consider Jordyn Woods and Karl-Anthony Towns’ astrological compatibility.

Woods was born Sept. 23, 1997, under the sign of Libra, and Towns’ birthday is Nov. 15, 1995, which makes him a Scorpio. Typically, this pairing’s a tricky one as they have trouble forming a bond of trust. Scorpio is secretive and Libra is flirty, both traits that can be major triggers for the other partner. As a result, this combination tends to work best when it starts as a friendship and grows into something romantic, because it allows each of them to really get to know one another while their defenses are down. That was apparently the case for Woods and Towns, who first sparked relationship rumors back in August 2019 when they were reportedly spotted shopping together. At the time, Woods shut down the speculation with a comment on a TheShadeRoom Instagram post. "Y’all gon make me not be able to have any friends and ruin relationships! Lol Karl is like a brother to me," she wrote. The relationship reportedly took a turn following Towns’ mother, Jacqueline Cruz-Towns’, passing due to complications from COVID-19. "Karl is friends with Jordyn’s entire family and he’s been going through a very tough time since April when his mom died," a source for HollywoodLife reportedly claimed. "Jordyn and her family know exactly what he’s going through so they’ve been there for him every way they can." Woods can relate, as her father, John Woods, died of cancer in 2017.

This kind of emotional intimacy might explain why this astrological odd couple is apparently so blissful. The question is, do they have what it takes to go the distance? Here’s what else the stars have to say about their compatibility.

Trust is their greatest struggle. 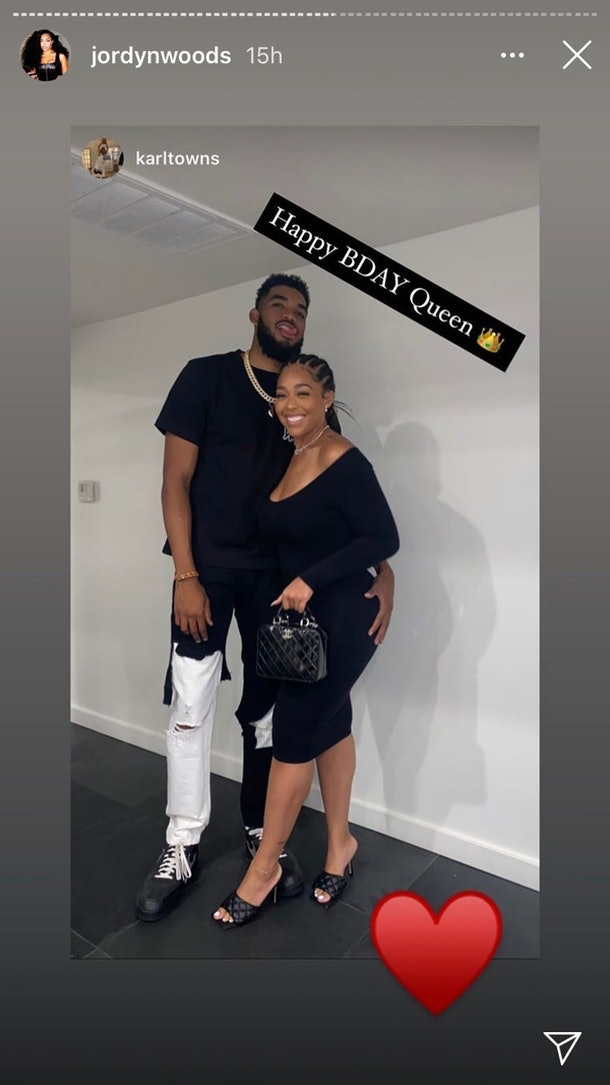 When Scorpio and Libra have issues, they will usually really come down to one major challenge: trusting each other. It’s not that either of them is unworthy of trust, it’s just that each behaves in ways that prevent or erode trust. Libra is the social butterfly of the zodiac, and this breezy air sign gets along with everyone and just likes to have a good time. They’re ruled by Venus, the planet associated with love and beauty, and it’s this connection that leads them to be a total flirt. For Scorpio, an emotional and feisty water sign, seeing their partner flirt is a very effective way to arouse their jealousy and anger. They may flirt with people in simple retaliation, or they can shut down and become even more secretive, which stirs distrust in Libra. This can quickly snowball and make a relationship impossible to maintain.

They ultimately want the same thing.

While Scorpio and Libra might take a different approach to find love, at the end of the day both are looking for a partner they can build a solid foundation with. They also want a partner they can be emotionally vulnerable with and who they can count on to be loyal to them above all others. If they can get through the initial struggle of trusting each other, they can find in one another the most important characteristics they’re seeking. Libra is the sign of partnership and Scorpio’s seeking a true partner in every way. In other words, if they can get over the jealousy, they might just have found their perfect match.

I found you, then I found me🤍

I found you, then I found me🤍

The area where these two need very little help is in the bedroom, as a Libra-Scorpio connection is a very passionate and affectionate one. Both Scorpio and Libra are uninhibited in the bedroom and can get lost in the physical aspects of lovemaking. But they’re also very emotionally in tune, so when they’re with one another it brings together the best of both worlds. Whatever issues they might have outside the bedroom disappear when that door closes.

While Woods and Towns might not be the easiest match from an astrological perspective, don’t count these two out. The friendship they shared beforehand and the fact that astrology is more of a guideline than a rule mean these two could just get their happily ever after.