Jussie Smollett Sentenced To 150 Days In Prison, 30 Months Probation & Over $100K In Fines

The ‘Empire’ star will face 150 days in prison for staging a hate crime, beginning immediately. He will also have to pay $120K in restitution, a $25K in fines, and spend

Jussie Smollett, 39, was sentenced to 150 days in prison and 30 months of felony probation by Chicago’s Judge James Linn on Thursday March 10. He was also ordered to pay exactly $120,106 in restitution and $25,000 in fines. The actor’s sentencing comes four months after he was found guilty on five counts of disorderly conduct for staging a hate crime when he filed a false police report, a felony offense. The star could’ve faced up to three years in prison for the scandal. Jussie can also appeal the sentence.

The sentencing came after Judge Linn delivered a lengthy speech detailing the case and the crimes Jussie committed. “There’s acute public interest in this case. People seem to care passionately and the reasons are many,” the judge said. “There is nothing I can do today than the damage you have done to your own life. You have destroyed your own life as you know it,” he went on. The judge acknowledged Jussie’s advocacy work against racial injustices, noting the hypocrisy of his crimes.

“There are giving sides to you…but there is another side to you that is selfish and narcissistic. And this bad side of you came out here. I believe you did damage to actual hate crime victims,” he added. “These are people who have a difficult time coming forward…they way not want to come forward due to mistrust.” As for motive, Judge Linn determined that the crimes where not money motivated — but rather, for fame and attention.

“You wanted to make yourself more famous. Why would you betray social justice issues which you care so much about? I believe that you did real damage to hate crime victims,” he also said. “I find that your extreme premeditation is an aggravating factor in this case…you’ve turned yourself to riches to rags…your very name has become an adverb for lying.”

Before the sentencing, Jussie’s lawyer had claimed that the public nature of the case had led to an unfair trial. She unsuccessfully argued for a new trial, pointing to errors during his trial. Prosecutor Sean Wieber didn’t hold back in calling out Jussie for trying to shift the blame to others for him being found guilty. “Smollett has blamed everyone for his conviction, the judge, the media, the entire Cook County justice system, political figures, witnesses at trial, COVID 19 and even the jury itself. Page after page after page of finger-pointing,” he said.

During the impact statement portion of the sentencing, the prosecutor had requested for $130,000 to be repaid for CPD overtime stemming from Jussie’s false police report. After the request for a new trial was denied, the defense attempted to have Jussie sentenced with probation and brought character witnesses to testify that he wouldn’t be a risk on probation. Jussie’s grandmother read a statement showing support for him, and he was seen wiping away tears as she read. 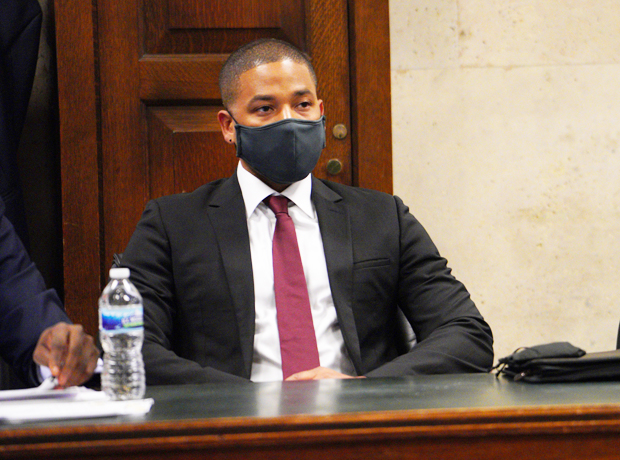 Jussie’s older brother Jojo also offered an emotional testimony to ask for leniency and that it wouldn’t include incarceration. The actor’s brother said that he still felt that his brother was innocent, but asked for empathy, noting some of his good qualities. “He has made real efforts in his lifetime to promote equality and love among all humanity,” he said. “He has expressed strong political views and has stood against injustice wherever he thinks it may lie. This criticism of powerful individuals, organizations and practices does not make him a bad person or someone who should be punished. It simply makes him an American.”

Ahead of the sentencing, plenty of stars and activists wrote to the judge to ask for leniency in Jussie’s case, according to The New York Times. Some of the letter written to the judge were read and referenced during the trial. Along with advocates like NAACP President Derrick Johnson and Rev. Jesse Jackson, Samuel L. Jackson and his wife LaTanya Richardson Jackson penned emotional calls for a light sentencing for Jussie. The Samuel and LaTanya’s letter spoke to Jussie’s character in the search for a lighter sentence, via Entertainment Tonight. “Jussie comes from a good family whom we are proud to know intimately and who we know stand ready to provide the support and monitoring assistance that they can provide for him in an alternative probation scenario,” the couple wrote in the letter.

The sentencing came after the actor was found guilty in December 2021. Jussie had claimed that he’d been attacked by two supporters of former President Donald Trump in January 2019. Included in Jussie’s claims were allegations that the two men had tied a noose around his neck. Prosecutors had also accused him of paying brothers Abimbola “Bola” and Olabinjo “Ola” Osundairo $3500 to stage the attack. Jussie was put on trial, which included six days of testimony from 13 witnesses, before a jury found The Mighty Ducks star guilty. 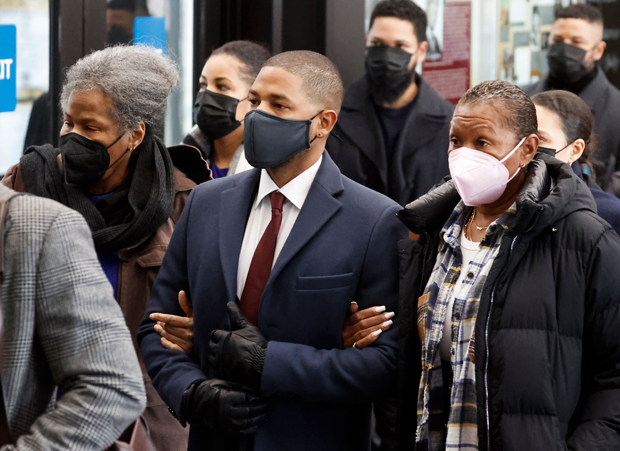 Jussie himself had taken to the stand on December 5, and he detailed meeting with the brothers ahead of the staged attacks. During his testimony, the actor spoke about how Olabinjo made him feel uncomfortable. “Every time we were around him he didn’t speak to me. Every time we needed to leave, he made it seem like we needed to sneak off. He wasn’t feeling me, it’s fine,” he said. He’d explained how he met the brothers while working on the fourth season of Empire, and said that they’d gone to a bathhouse together, taken drugs, and been close to each other. He also claimed that there’d been “touching,” and the men eventually masturbated near each other, although Abimbola denied these claims.