Karol G and Anuel AA Speak Out After Splitting Months Ago

Karol G and Anuel AA are speaking out after ending their engagement and going their separate ways.

News of their split came in mid-March, but on Tuesday, the couple took to their social media to confirm and address their breakup.

“If just accepting it is hard enough, imagine having to do it in front of millions of people,” Karol wrote in Spanish on her Instagram Story. “For a long time we tried to keep our relationship away from social media in order to protect ourselves. We never used our relationship for marketing purposes, not today, not even almost three years ago when we started [dating].”

“We were two people with public lives that wanted to have a normal relationship just like another other and that’s the reason why we never hid our feelings and went public with our relationship,” she continued. “The incredible things that happened to both of us, personally and as artists, were a blessing and a result of our beautiful love.”

She thanked everyone for following them on their journey, adding that the love that they shared with everyone was unimaginable, incredible and magical.

“I love you Emmanuel, my gratitude to you, your family and everything we lived through, our growth and what we learned together,” she said. 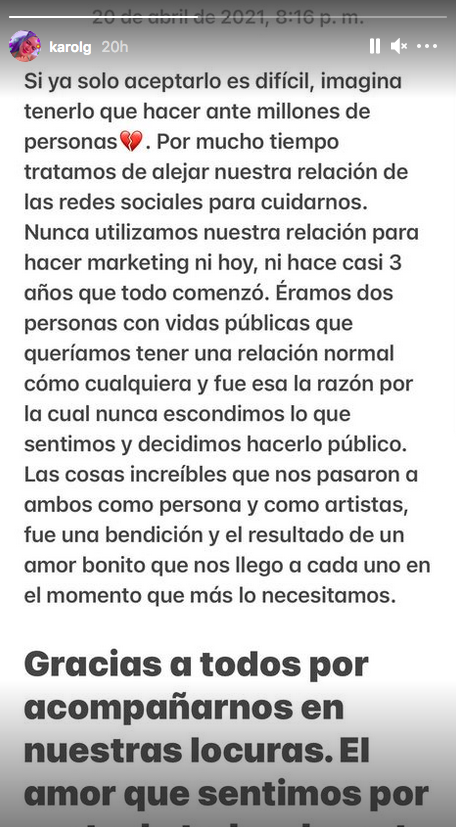 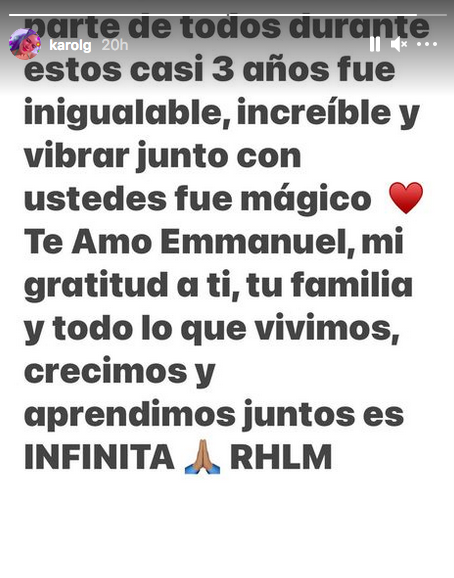 Meanwhile in an Instagram Live, Anuel confirmed that they split about “four months ago.” He said that he had heard a lot of rumors about their separation, but that while they split, they remain good friends.

He said that they broke up on good terms and he loves and respects her, and will continue to support her in all her decisions. “There was no controversy,” he said, adding that there was no infidelity, they just went their separate ways.

Karol and Anuel first met in August 2018 on the set of the music video for their song “Culpables.” They confirmed their relationship months later, in January 2019, and announced their engagement that April.

“There are no words to explain,” Anuel told ET of his happiness on the red carpet at the 2019 Billboard Latin Music Awards, where they made their debut as an engaged couple.

Karol said Anuel’s romantic gestures showed her he was the one. “He is super romantic, that was one of the things that told me that he was the one,” she shared. “These days, you don’t find a lot of romantic men like him. He’s my favorite.”

The 30-year-old singer added that Anuel’s proposal was “better” than anything she could have hoped. “I am super excited, everything has been so special and we are having the best time,” she gushed. Between our music and everything that we are going through with our love, everything is amazing.”

While they hadn’t set a wedding date, by August 2019, Karol told ET she and Anuel were living as if they were already married.

“I don’t have any wedding planning updates, but I can tell you that I’m living as if we are already married,” she said. “We are very happy and [we’ve been so busy]. I was on tour in Europe and he was on tour in the US. We had some time where we overlapped and got to spend time together.”

“I feel like also being apart from each other also helps our relationship and breaks the monotony of things. And every time we see each other it’s like a surprise and I get really excited. So we don’t have a date right now, but I’m acting as if we’re already married,” she added.

Karol and Anuel continued to collaborate musically throughout their relationship. They filmed an intimate music video for their song “Follow” in quarantine last year, and her most recent music video for “Location” featuring Anuel and J Balvin dropped in February.

Before dropping her new album, KG0516, in March, Karol told ET about the lack of privacy as a singer.

“One of the most important things that mean a lot is a little bit of privacy,” Karol told ET. “It’s kind of weird because when you start in this career, you really want people to know you…The time is passing and I enjoy my family and being [by the] fireplace and by myself.”

Adding that she likes to share less about her personal life on social media, she said, “I really want to keep things for me. Social media gets a little bit toxic sometimes, and I get scared sometimes because you become what people talk about you. And you don’t have the time or the moment to explain you are not that and you’re not what people are saying. Sometimes there is a lot of fake news and you don’t know where they come from, and it’s weird and it’s hard and it’s frustrating. So yeah, if you can keep it private, I think it’s better.”