And here we have yet another example of the disconnect between wealthy celebrities and everyday people, perfectly summed up in one ill-worded tweet!

On Monday, Keke Palmer drew the ire of fans on Twitter after she began sharing messages about her personal healthy food journey and at one point, made an off-hand comment about folks using EBT (electronic benefit transfer) cards. The actress wrote in a since-deleted tweet:

“Imagine if your EBT card could only work on healthy items…

See her words immortalized by the Internet in a screengrab (below): 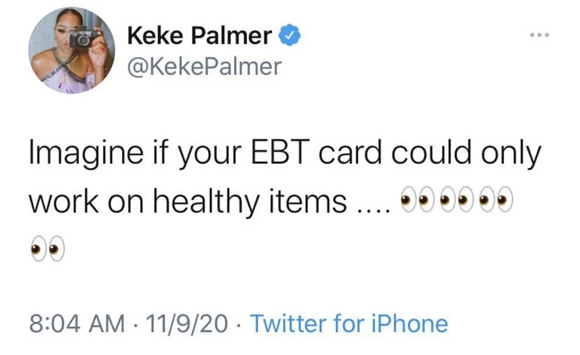 For those who may not be familiar with EBT, also known as food stamps or SNAP, it’s a government-run program that gives individuals with low incomes a small budget every month to buy groceries. It’s worth pointing out that the idea that the government should control what EBT recipients are allowed to buy is a talking point often made by conservatives who would like to see the program either reduced or cut entirely. A recent example is Donald Trump, whose administration has proposed getting rid of the monetary assistance and replacing it with preset boxes of food, in which the recipient has no choice in what they get.

With this added context, is it becoming a bit easier to see why KeKe got slammed pretty hard for her suggestion?

See, many folks were upset that the actress — a very wealthy one at that — was seemingly trying to control what the less fortunate eat, just like we explained to you. One Twitter user called the concept “disturbing” and questioned why the Hustlers star was concerned with the subject to begin with:

The criticism continued from there as others suggested that instead of trying to limit what people living in poverty can eat, we work to actually fix the poverty itself! And a different user pointed out the steep price tag that often comes with budgeting for healthier shopping choices:

Several people in Palmer’s replies pointed out the existence of food deserts, which are areas often found in low-income neighborhoods where residents do not have access to fresh, healthy produce because grocery chains and farmers markets aren’t doing business there. When’s the last time you saw a Trader Joe‘s smack dab in the middle of the hood?! Exactly.

But we have to say, this argument made by a follower which stated that people living in poverty have just as much of a right to enjoy junk food as anyone else really hit the nail on the head for us!

Keke engaged with a lot of the backlash she received, but eventually deleted the initial tweet altogether. Later, she clarified her stance to say she believes healthy foods should be free to those with EBT cards — and she even tagged Vice President-elect Kamala Harris to see if she could make that happen! She wrote:

“To clarify my tweet was pertaining to issues w/ healthy foods being 2 expensive & thinking it should be free for those w/ EBT cards. This was not a suggestion for solving all low income issues. Solely a hopeful solution 4 those with EBT that want to run it up w/ meat & produce.

Hey @KamalaHarris I know you just started but me and my friends were talking about it and we think EBT cards should swipe free on all items considered HEALTHY. Xoxo”

She added her own family has used the public benefits program in the past, noting it’s “nothing to be ashamed of,” and it still needs to be improved:

And the TV host further addressed the controversy on Instagram, where she elaborated:

“Imagine if you could get whatever healthy foods you wanted on your EBT card. Like all the healthy foods could swipe for free. Pretty much a reward for being healthy but even more so giving homes a break that want to eat healthy but can’t afford it!”

You can read her full response (bel0w):

Quite a fast turnaround once folks began calling her out, wasn’t it?

We can appreciate the way she caught herself, but it almost makes it worse knowing she once used the very thing she’s trying to police others for using. She even said it herself on IG that healthy food is ridiculously expensive! Celebs like Keke are lucky no one has receipts for how they spent their time and money before making it big…

Perezcious readers, where do U stand on all of this? Sound OFF in the comments with your thoughts!