Kim Kardashian looked stunning in an outfit perfect for sightseeing, while in Rome over the weekend.

Kim Kardashian, 40, was well-prepared for the summer heat, while visiting Rome on Sunday, June 27. The Keeping Up With The Kardashians star sported a white, long-sleeved plunging top and navy blue, high-waisted short shorts with flip flops as she toured some famous Roman landmarks. Kim also donned a pair of sunglasses with navy blue frames that matched her shorts and accessorized with a cross necklace. 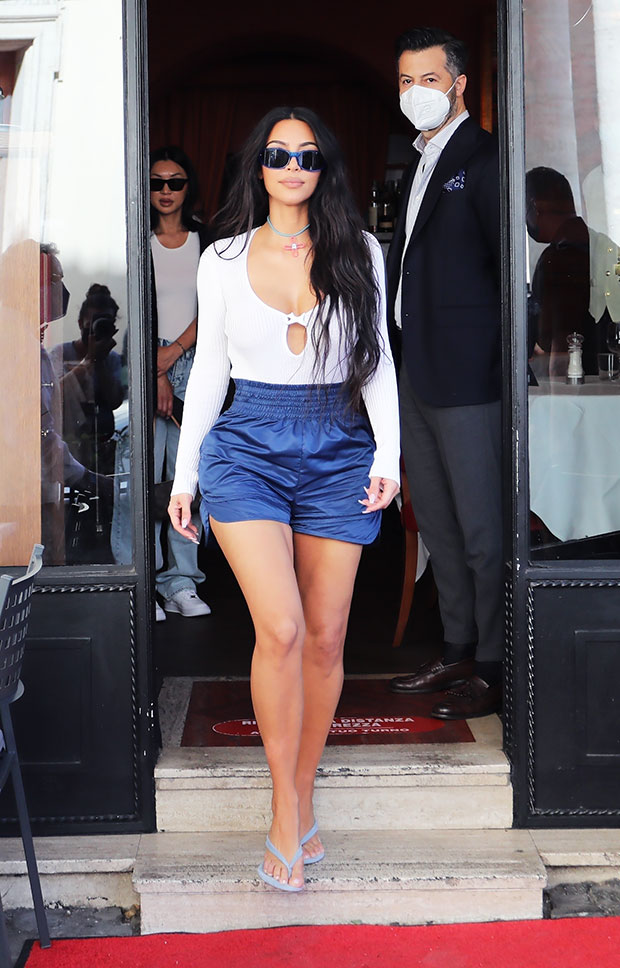 The simple outfit seemed liked a good choice for her to keep cool and move easily in the summer heat! Kim shared on her Instagram stories that she was doing some classic Italian sightseeing. In a video posted on Monday, June 28, she filmed the Roman Colosseum, as a tour guide explained that gladiators used to battle in the historic arena.

Kim later posted a few more pictures that showed different angles of the famous landmark. She also shared a shot of her posing with her makeup artist Mario Dedivanovic and hair stylist Chris Appleton from the Colosseum’s ground floor. Both Mario and Chris posted the picture to their Instagrams on Sunday. Mario wrote that the “Glam fam reunited in Rome.”

In her Instagram story at the Colosseum, Kim was wearing the same pair of daisy dukes and white bodysuit. Mario wore a black t-shirt and dark pair of jeans with white sneakers, while Chris donned a funky short-sleeve button down, black jeans and white sneakers.

Kim still looked fabulous, even if the outfit was a little more casual than some of the other clothes that she’s been spotted wearing out recently. The SKIMS founder was recently seen wearing a bright orange Yeezy leather jacket, designed by her ex hubby Kanye West, that matched the inside of her Rolls Royce while at a Shell gas station in Malibu. Besides the jacket, Kim was also dressed to the nines in a vintage Dior dress, carrying a Hermès Kelly Pochette Swift bag. Kim also shared a fun “Taco-Tuesday” picture on June 15. In the Instagram picture, the KUWTK star is taking a bite out of a taco while wearing a sexy bright yellow Haus of Pinklemonaid bikini.