You might’ve saw this one coming, but Scott Disick and Sofia Richie have officially broken up, according to multiple sources and outlets. This split came after Scott decided to seek treatment for “emotional issues” and “past traumas” and after a week of rumors about Sofia possibly seeing someone else amid their break.

Now that this upsetting news has devastated all the Scott and Sofia shippers out there, it’s time to figure out what TF happened and why Kourtney Kardashian’s name is being brought up.

As previously suspected, the couple decided to split amid Scott’s treatment so they could both focus on themselves. According to E! News, “There wasn’t a fight or anything bad that happened between them.” It’s just as simple as Sofia wanting to “do her own thing” as Scott gets healthy.

That said, a Page Six source came in hot with some breakup news involving Kourtney, who Scott spent his birthday with. According to the source, Scott’s relationship with Kourtney was definitely a factor in his and Sofia’s split. “Kourtney didn’t make it easy for [Sofia], and you can only tolerate that kind of treatment for so long,” they said. 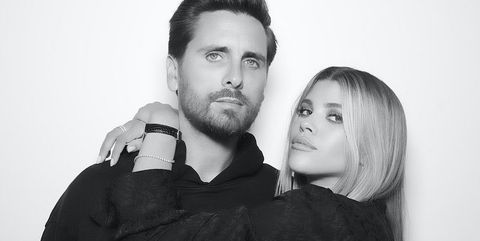 Page Six also reported that Sofia was getting “fed up” with his behavior, but that honestly seems like a bit of a stretch considering Sofia has been super supportive of him this whole time.

Still, there is hope they could get back together as this isn’t their first split and they’re still in touch, according to the E! report. Time will tell!