Just as the music livestreaming space has quickly grown saturated with competition as stay-at-home restrictions have kept concertgoers homebound, new livestreamer BeApp, launching on Thursday, is bringing a star-studded set of performances to the app.

Among the many high-profile acts slated to perform through the two-month series, EDM DJ Kaskade will start the sessions with a set live from the Grand Canyon Thursday at 9 p.m. EST. Diplo will perform at the same time Friday and DJ Khaled and friends will perform Saturday at 7 p.m. EST. All the shows, performed through Coca Cola’s Coke Studio Sessions, will be free. In the spirit of a genuinely live show — save for a rerun for global markets — performances won’t be accessible past the live event.

Khaled will be performing over the course of 11 episodes throughout the series with various special guests. Past this weekend’s slate of shows, Mariah Carey, Katy Perry and Steve Aoki are confirmed to play, and BeApp will also air a re-creation of Lin Manuel Miranda’s Hamilton complete with new COVID-19-inspired compositions penned by Miranda. BeApp says it will be announcing other high profile acts set to perform as well.

BeApp is the latest to enter an increasingly dense livestreaming space. It’s been in development since just before the ongoing pandemic hit the U.S., and founders Ray Smith and Ross Mason say the app’s release was accelerated because of the clear need and opportunity brought on from social distancing orders. Smith started a separate venture called Be At TV in 2008 to stream live events like concerts and festivals. Mason says BeApp was focused on bringing global access for listeners in areas where artists don’t often perform, but now that concerts at large have stopped, the need has expanded greatly.

“I remember when we first launched, people asked ,’Who’s going to sit at home and watch a live music experience on their laptop or phone?’ You fast forward to over a decade later and it’s become the new norm,” Smith says. “We started BeApp at the advent of COVID, and we were doing a lot of stuff with Be At TV in the live festival streaming space. People say we’ve been moving quickly, but there’s a lot of institutional knowledge that helped us respond and react quickly to create this new platform.”

BeApp also says its streams will be higher quality than what’s often been the case on more casual performances with artists recording with their smartphones. The company is sending 4K cameras and high-quality mics to the artists, and the BeApp team mixes the live audio too. 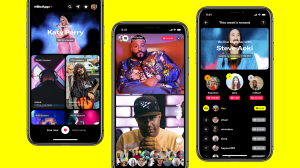 Between all the new and revitalized livestreamers alongside larger social media platforms like Facebook, Instagram and TikTok — which all have livestreaming features — BeApp faces stiff competition. With the need for the platform at its peak, BeApp is betting that a unique, more interactive user experience will earn the app regular users and differentiate it from more passive viewing options like YouTube and Instagram Live. Traditional streaming experiences like festival livestreams have proven to bring in viewers, but many leave a few minutes later, Smith says. BeApp wants to keep them for entire shows.

BeApp is incorporating various bells and whistles into the experience, including syndicating the streams to participating artists’ individual social media pages and selling artists’ merchandise directly in the app. It’s gamifying the experience for users too, with fans earning virtual currency by watching shows and sharing the app with friends. Users can redeem the points to buy merchandise, get their name displayed on the livestream and get on a split screen to interact directly with the performing artist. Viewers can donate for COVID-19 relief in-app as well.

“[Being interactive] is pretty key to our philosophy as a company,” Mason says. “Social media is lacking content that’s leaning forward and engaged. No one has spent enough time figuring out what engages people versus sitting through a YouTube video getting bombarded with ads every two minutes.”

Smith and Mason say the new company is still defining its business model; with 100% of proceeds going to the Red Cross, it won’t generate any profit from the series. Smith had hinted at utilizing sponsorships akin to how physical venues operate and creating other new revenue streams for artists.

“This isn’t a sprint. The business model will evolve as time goes on. The challenge we’re trying to solve is universal,” Smith says. “Yes, we’re talking about a concert for the next 60 days, we’re planning on being here for the next 60 years to connect content to fans around the world that can’t get to it for whatever reason. That idea isn’t going anywhere; COVID just accelerated people’s understanding of what it can do.”