Meghan Markle and Prince Harry registered several domains in their second child’s name ahead of the baby girl’s birth.

“As is often customary with public figures, a significant number of domains of any potential names that were considered were purchased by their team to protect exploitation of the name once it was later chosen and publicly shared,” a spokesperson for the Duke and Duchess of Sussex confirmed to People magazine on Tuesday.

Some of the domains purchased were LilibetDiana.com and LiliDiana.com, The Telegraph shared. However, the outlet reported that the purchases were made before Queen Elizabeth II approved the name.

The domain name LillibetDiana.com was purchased on June 4, the same day that the baby was born and two days before the public announcement. The outlet reported that several days earlier, on May 31, the domain was registered.

The outlet noted that the domains are not active yet. The couple’s firstborn Archie, 2, has a website in his name for the charitable foundation Archewell.

Lilibet “Lili” Diana Mountbatten-Windsor was born on June 4 at the Santa Barbara Cottage Hospital in Santa Barbara, Calif. The child is eighth in line to the British throne.

Prince Harry and Meghan Markle registered several domains in their second child’s name ahead of the baby girl’s birth.
(AP)

The name pays tribute to both Harry’s grandmother, the queen, whose family nickname is Lilibet, and his late mother, Princess Diana.

The name Lilibet was first used by a young Princess Elizabeth when she was unable to pronounce her name properly, the outlet reported. It has only been used by her parents, her late husband Prince Philip, as well as a handful of relatives and closed loved ones.

“Thank you for your continued kindness and support during this very special time for our family,” the couple wrote in a statement that accompanied the birth announcement.

The baby is “more than we could have ever imagined, and we remain grateful for the love and prayers we’ve felt from across the globe,” they continued.

A spokesperson for the British prince and former American actress told People magazine that they spoke to the queen before using her nickname for their daughter. 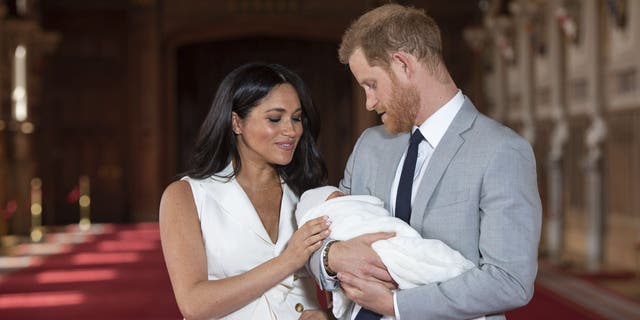 The couple has a son named Archie Harrison Mountbatten-Windsor, who was born in May 2019.
((Dominic Lipinski/Pool via AP, File))

“The duke spoke with his family in advance of the announcement, in fact, his grandmother was the first family member he called,” the spokesperson said. “During that conversation, he shared their hope of naming their daughter Lilibet in her honor. Had she not been supportive, they would not have used the name.”

A Buckingham Palace spokesperson said the queen; Harry’s father, Prince Charles; his brother, Prince William; and other members of the family had been informed and are “delighted with the news of the birth of a daughter for The Duke and Duchess of Sussex.”

Markle, 39, became the Duchess of Sussex when she married Harry, 36, in May 2018 at Windsor Castle. The couple welcomed a son named Archie Harrison Mountbatten-Windsor in 2019.

The Duke and Duchess of Sussex’s departures from royal duties began in 2020 over what they described as the British media’s intrusions and racist attitudes towards the former “Suits” star. The family now resides in the coastal city of Montecito, Calif.