Home » Meghan Markle & Prince Harry: Why Some Fans Think They May Be Naming Their Daughter Poppy

Meghan Markle & Prince Harry: Why Some Fans Think They May Be Naming Their Daughter Poppy

Some of Meghan Markle’s fans think she was name-signaling her unborn daughter’s moniker thanks to her wardrobe choice during ‘Vax Live.’

Based on Meghan Markle‘s dress that she wore during her video appearance on the Vax Live special, fans are guessing that she might be tipping them off to a name she and Prince Harry, 36, have selected for their unborn daughter. Her $1,690 red Carolina Herrera dress featured pink poppy prints, thus some Sussex fans are thinking the couple has decided to name their daughter “Poppy.”

One fan account wrote, “During the broadcast, Meghan was seen wearing an absolutely gorgeous @carolinaherrera tie-waist shirt dress, covered in … poppies. POPPY!?!!! What do we think?!! I’ve always loved the name and think it could be a perfect fit — given the backstory of the distinctive red flower.” In Britain, poppies are a symbol of support for Armed Forces community, of which Harry was once a part of. He served two tours of Afghanistan and rose to the rank of Captain in the British Army. 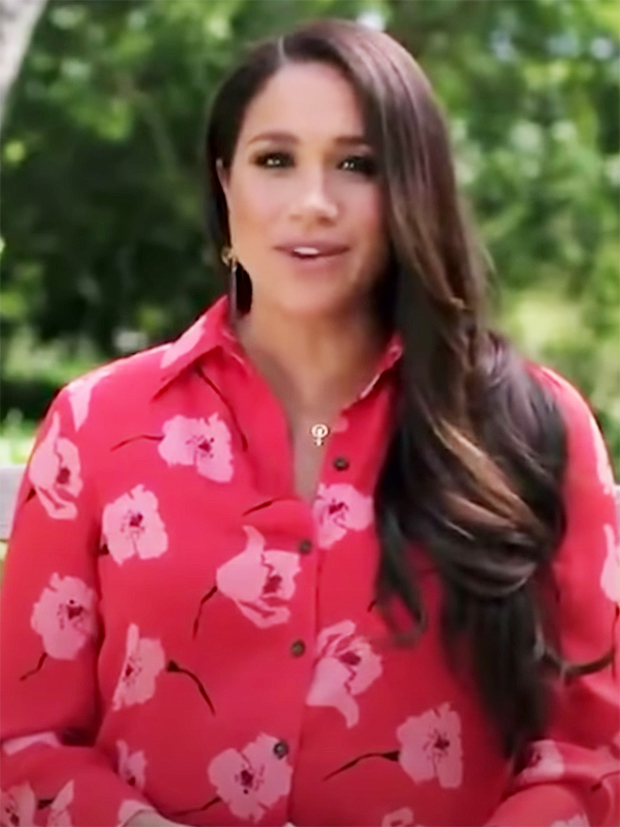 Another user thought that the poppies on the dress were an “Easter egg” about their daughter’s name:

Other fans  thought that the poppies were a shout-out to Harry and Meghan leaving their royal life in the U.K. for one of “finding freedom” in California:

Another fan thought that the poppies were a way of shading the British Royal Family and Queen Elizabeth. Her majesty noted in a Feb. 19 statement about Harry and Meghan stepping down from the BRF permanently, “Following conversations with The Duke, The Queen has written confirming that in stepping away from the work of The Royal Family it is not possible to continue with the responsibilities and duties that come with a life of public service,” the palace statement said.

The couple then released their own statement where they said the would continue to do good works and that, “We can all live a life of service. Service is universal.” A user named Grace pointed that out in a tweet reading, “Meghan wore the poppy dress by Caroline Herrera, in remembrance to all those people, who lost there lives this past year. SERVICE IS UNIVERSAL!”

Harry and Meghan’s baby daughter is due to arrive in early summer, so fans will have to wait until then to see if their guesses are correct about “Poppy” becoming the little girl’s name. The couple are already parents to a son Archie, who just turned two. Harry and Meghan first revealed that they are expecting a daughter during their bombshell Mar. 7 interview with Oprah Winfrey.