Meghan Markle Talks ‘Clickbait’ And ‘Toxicity’ In The Media

The Duchess of Sussex, who once reportedly thought about becoming a journalist herself, sat down with Emily Ramshaw, co-founder and CEO of The 19th*, on Friday for a candid discussion at The 19th* Represents Summit.

Ramshaw, former editor-in-chief of nonprofit media organization The Texas Tribune, spoke with the duchess about how The 19th* came to be and what a newsroom and can look like with better representation. Meghan also spoke about the downfalls of clickbait and the “economy for attention” in media and what it was like to return to the U.S. after a decade away.

Ramshaw opened with some of the challenges of founding The 19th*, especially in the midst of a global pandemic. But as she saw how COVID-19 personally affected women in terms of issues like job loss and child care and as the U.S. went through a racial reckoning, she realized her mission was more important than ever.

The co-founder said The 19th* was really the first national news outlet to elevate the killing of Breonna Taylor after one of Taylor’s family members approached an editor there.

Ramshaw said she hopes her team, which is 91% women, will set the “gold standard for the industry.” She added that there is a hunger for the kind of coverage The 19th* provides and the outlet has a “moral obligation to meet women where they are,” which is one of the reasons it’s letting people and organizations republish their stories for free.

Ramshaw later switched gears to ask Meghan a few questions about her extremely personal experience with the media and how she thinks coverage would be different with more women and people of color at the helm of news organizations.

“I think what’s so fascinating ― at least from my standpoint and my personal experience the past couple of years ― is the headline alone, the clickbait alone, makes an imprint,” the duchess said. “That is part of how we start to view the world, how we interact with other people.”

Meghan added that there is “so much toxicity” in this “economy for attention,”  something she and her husband, Prince Harry, often talk about. “That is what it monetizable right now when you’re looking at the digital space and media. If you’re just trying to grab someone’s attention and keep it, you’re going for something salacious versus something truthful.”

Ramshaw also asked Meghan, who moved back to her hometown of Los Angeles after about 10 years away, what it was like to be back in the U.S. at this moment in time.

“It was so sad to see where our country was in that moment,” Meghan said of returning to LA as the country was mourning the deaths of Black Americans like Taylor, George Floyd, and Ahmaud Arbery.

“I think at the onset, if I’m being honest, it was just devastating,” the duchess added. “If there’s any silver lining in that, I would say that in the weeks after the murder of George Floyd, in the peaceful protests that you were seeing, in the voices that were coming out, in the way that people were actually owning their role and acknowledging their role … I can see that the tide is turning.”

“It’s not new to see this undercurrent of racism and certainly unconscious bias, but I think to see the changes that are being made right now is something I look forward to being a part of,” the duchess added. “​And b​eing ​a ​part of using my voice in a way that I haven’t been able to of late. So ― yeah, it’s good to be home.” 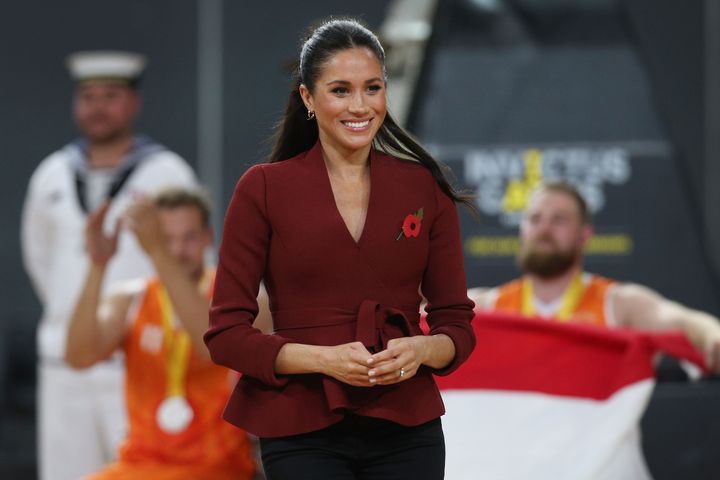 The 19th* is a nonprofit, nonpartisan newsroom with a focus on the intersection of gender, politics and policy. The organization’s mission statement is “to empower women — particularly those underserved by and underrepresented in American media — with the information, community and tools they need to be equal participants in our democracy.”

It gets its name from the 19th Amendment, which, rather than outright giving women right the to vote, guaranteed that states couldn’t bar people from voting due to their sex. This provided enough leeway for states to find ways to continue to disenfranchise women after the amendment was ratified.

The asterisk in the newsroom’s name is meant to symbolize that, in effect, only white women were ensured the right to vote after the amendment was ratified, while Black women’s right to vote wasn’t solidified until after the Voting Rights Act passed in 1965. And as Ramshaw said during her talk with the duchess, voter suppression is still very alive and real.

The duchess told Glamour magazine last week in a statement announcing her role and participation at the summit that she was looking forward to asking Ramshaw about “what it means to build a media outlet with gender equity, diversity, and community at its core.”

Meghan added that “The 19th*’s commitment to reporting and storytelling that lifts up those who are too often underrepresented in the media has never been more important.”

Ramshaw told CNN that duchess’s participation in the summit was Meghan’s idea. Ramshaw said she “nearly fell out of my chair” after receiving a call from the Sussex team.

“The duchess basically said that the issues that we care about are issues that she’s really interested in this moment,” Ramshaw told CNN, adding that “those things include super-high-quality media, gender equity, racial justice.”

The Duke and Duchess of Sussex made it clear that they wanted to renegotiate their relationship with the media following their step back as working members of the royal family in January, and they’ve certainly followed through.

In the weeks and months since their momentous announcement, they have spoken and worked with outlets they might not have collaborated with as members of the royal family, who typically engage with members of the Royal Rota, a pool system used by U.K. journalists.

Prince Harry recently wrote an essay about the divisiveness of social media for Fast Company and spoke to Rashad Robinson, a civil rights activist and president of Color of Change, about systemic racism and online hate in a conversation shared on Instagram.

The Duchess of Sussex shared a powerful graduation address exclusively with Essence following George Floyd’s death at the hands of a white police officer.

Meghan also spoke with Glamour to announce her participation in The 19th* Represents Summit and also participated in a Marie Claire feature that asked women why they’re voting in the upcoming 2020 election.

Omid Scobie, royal editor for Harper’s Bazaar and author of the biography “Finding Freedom,” told HuffPost this week that the Sussexes are able to do more work in certain areas they’re passionate about because they don’t have the boundaries they once did as working royals.

“People often ask us, ‘Do you think they have freedom?’” Scobie said of the couple’s transition. “And looking at the work that they’re doing, I do think that they are much freer to do the things that mean the most for them.”

“They are a couple that talk about impact a lot, and I think that that impact ― we’re seeing it right in front of us,” the journalist said. We “see Meghan talking about voting for the first time in a while because of course, that’s something she would’ve been almost silent about throughout her time as a working royal.”

“I think now we really do hear her voice, as it should be,” he added.

Subscribe to HuffPost’s Watching the Royals newsletter for all things Windsor (and beyond).