The ‘Angel of Mine’ songstress finally addresses the reports speculating on her relationship with the ‘Tunnel Vision’ rapper after they were spotted hanging out together multiple times.

AceShowbiz –Monica has broken her silence on latest speculation about her love life. Having been inundated with rumors of her alleged romance with Kodak Black, the singer has taken to social media to address the matter.

On Thursday, October 27, the R&B star let out a statement on Twitter to clarify the nature of her relationship with Kodak. “Bill & Shimmy My Heart …,” she wrote of the “Super Gremlin” spitter and Loe Shimmy. “They know they can trust me with whatever & never have to doubt me!!”

Shutting down the dating reports once and for all, she stressed, “Not every relationship is about messing or dating! I hang with their moms because I’m their age! LOL.. I’m gonna FOREVER love support & encourage them! They don’t play about me.”

Monica also reposted on her IG Story Loe Shimmy’s statement in which he pointed out that she was like a mother to him and Kodak. “This our second mama right here she so genuine so loving towards us,” he wrote over a photo of the three of them. “So all the blogs stop assuming an [sic] thinking it is what it ain’t this our mama right here and we gone smush sum bout her. @monicadenise I love you babygirl.”

Reciprocating the feeling, Monica added on her own Story, “Love y’all too… and the women that love you and are really in your lives! I pray they weren’t hurt by this foolishness! I’m ALWAYS here… if it’s within my reach yall got it @loeshimmy to the death my Z Babies! Nah put the black down!!!” 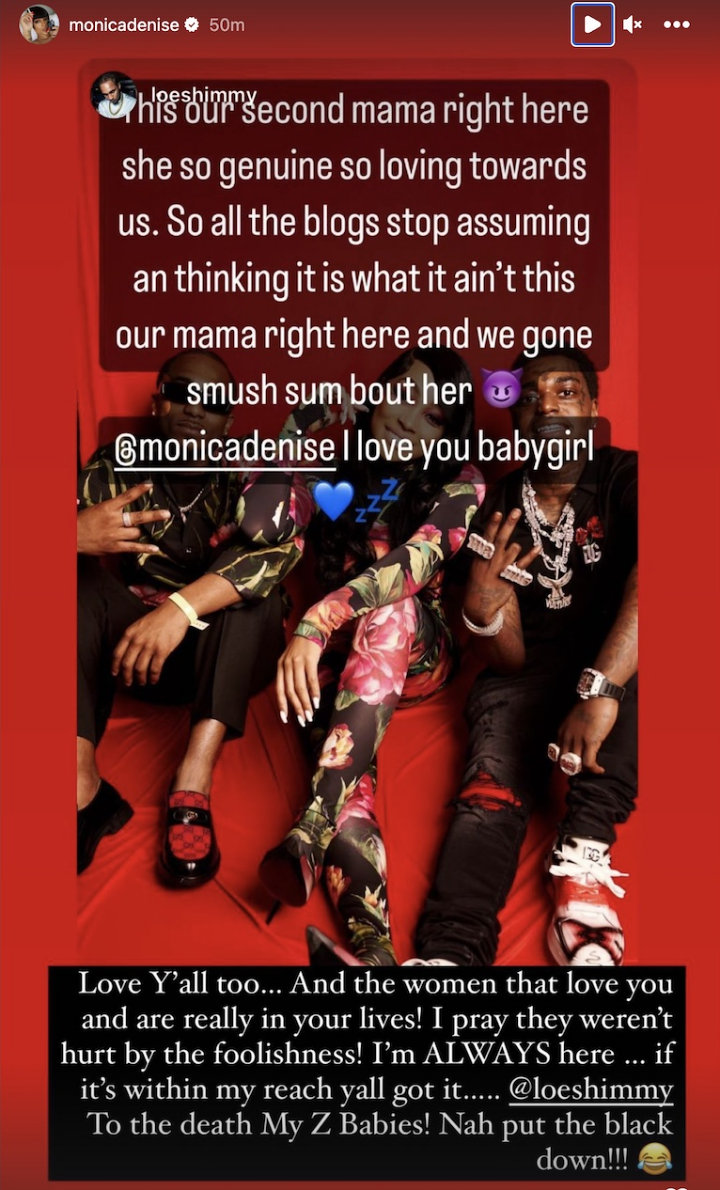 Monica and Kodak’s dating rumors surfaced as they appear to get closer to each other lately. A source allegedly close to the 41-year-old singer told Media Take Out that the two were “having fun,” though it appeared that their relationship was not exclusive nor they were serious about it.

Monica recently posed with the 25-year-old rhymer and his mother Marcelene Octave in an Instagram post shared earlier this month. Later on October 16, the Georgia native was seen sitting on the passenger’s seat of Kodak’s car. In another video posted on TikTok, the two appeared to have fun as they showed off their moves to his song “Spin”. “The Boy Is Mine” hitmaker also spent her birthday on Monday, October 24 with Kodak, who is 16 years her junior.

Reacting to the dating rumors, many social media users trolled her, with one saying, “Monica really is hood. Low key sad especially at her age. Hopefully its just entertainment.” Another person tweeted, “Monica that boy is 25 years old and you 42 plus Kodak???? of all people lol Down Bad!!!” A third critic weighed in, “I honestly thought Kanye was having the worst midlife crisis of all time, but Monica dating Kodak is straitjacket worthy.”