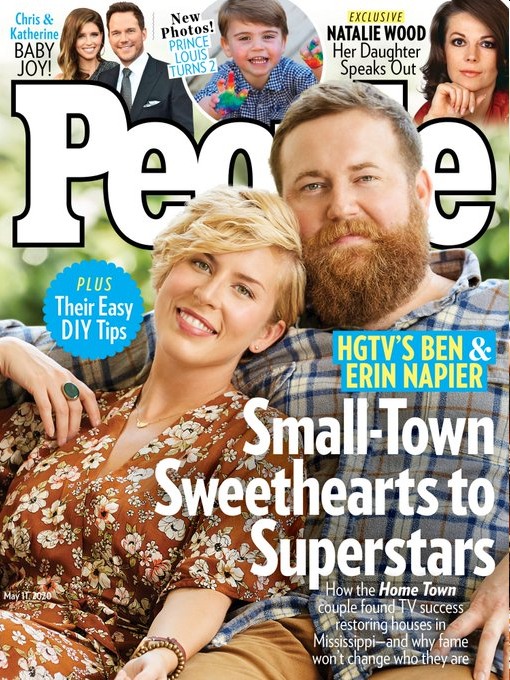 My go-to relaxation channels are the Food Network, the Cooking Channel and HGTV. I don’t like any of the competition shows, and I loathe Jonathan and WhatsHisFace Scott, both of whom come across on-camera like they have big serial killer energy. For a while, I considered Erin and Ben Napier the “poor man’s Joanna and Chip Gaines,” but I’ve revised my opinion of them over the lockdown. I got drawn into a Home Town (the Napiers’ HGTV show) marathon early in the lockdown, and now I kind of love them. I still have questions about her decorating ability (questionable), her ability to put the right colors together (non-existent) and her “art,” but I really love them now. They’re sweet as hell and they’re less churchy than Chip and Joanna Gaines, if that makes sense. Still, now that the Gaineses have left HGTV, I guess People Mag wants to make the Napiers the next family-friendly home-reno couple.

Ben and Erin Napier might be some of HGTV’s biggest stars, but the college sweethearts never planned on being famous. Before the former church minister, 36, and his graphic-designer wife, 34, shot to success on their hit series Home Town, on which they find and renovate homes for families, they were newlyweds trying to fix up their own dream house: a 1925 craftsman cottage in Laurel, Miss.

“Since I was a kid, I had always wanted to live in it,” Erin says of the home in the latest issue of PEOPLE. As they overhauled the house room by room, every choice had to be made on a budget. “We didn’t have a dime to waste,” she says. The couple got thrifty with materials, and Erin documented the project from start to finish. Once their home was completed, it was featured by several magazines and websites, where it caught the eye of an HGTV producer.

“She sent us an email and said, ‘This might sound crazy, but I’ve been stalking you on social media, and I’d like to put you guys on TV,’” recalls Ben. “I was like, ‘Really? Why?’”

Now the Napiers, who are also parents to 2-year-old daughter Helen, command a growing home-improvement empire, including their series Home Town (now in its fourth season), plus the spinoff Home Town Takeover, two retail stores, a book and a furniture line. “We never expected this,” says Erin. “Getting a TV show never even crossed our minds.”

Making the couples’ evolution even more unexpected is the fact that they had had zero formal experience in construction or home design before launching their show in 2017. “The way it all happened was crazy,” says Ben. “ It was never something we thought would turn into a career.”

“Former church minister,” just had to throw that in for the People readers! Honestly, from the episodes I’ve seen, they’ve already renovated two houses for young gay couples and the Napiers seem genuinely “cooler” than their “Mississippi minister and his Karen-looking wife” vibe would indicate. Anyway, I’m going back and forth between “being happy that a nice, cool HGTV couple is getting attention” and “being sad that they’ll have to play up the churchy vibe now.” Also: I love his wood pieces. I love how much he loves wood! Ben is a sweetheart.