The red carpet legend that is Regina King has been delivering one fashion win after the next this (digital) red carpet season. First, it was a sleek custom Louis Vuitton for the Golden Globes, then a dramatic Atelier Versace sequin sheath with dramatic ruffled shoulders for the Critic’s Choice Awards, and a high-low, terracotta-toned Oscar de la Renta for the NAACP Awards. Most recently, she graced us with this epic Christopher John Rogers moment last night to present for the CDGA Awards, which celebrates excellence in costume design.

Stars up the style ante for this event given its focus on fashion. As King noted on her Instagram account, “Costumes play such a big part in helping to shape a character.” The celebrated actress, who never disappoints on the carpet, sported a bright orange, sleek gown and accessorized with Bulgari jewels. On his account, Christopher John Rogers described the design from his Collection 007 as a “snatched Habanero utility twill column with pleated train.” 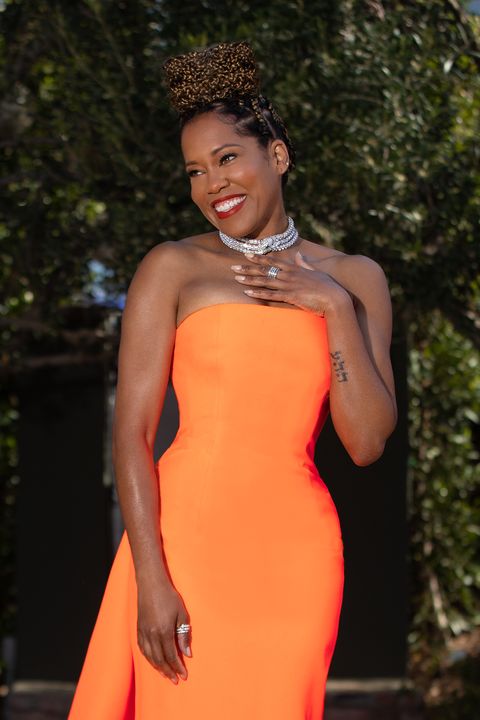 Also unique about this look: the ability to shop it now, via Saks Fifth Avenue and Net-a-Porter. Red carpet gowns are typically custom, created by designers specifically for the celebrity and the event in question. However, with designers switching up the fashion calendar in the wake of pandemic lockdowns, we’ve seen production changeups and pieces trickling into stores at a different pace. One silver lining for fashion lovers worldwide? You can now shop looks worn by the red carpet’s best dressed—a la King’s standout orange gown—online and in-stores.