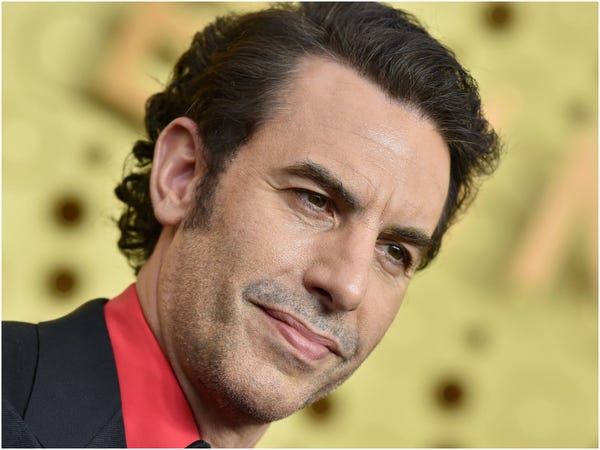 In a recent op-ed for Time magazine, Sacha Baron Cohen described a gun-rights rally that went wrong during filming for "Borat 2," saying he was "fortunate to make it out in one piece."

In July, Cohen attended a gun-rights rally in disguise, and got the far-right crowd to sing that they wanted to infect Barack Obama and Dr. Anthony Fauci with COVID-19. Cohen got the crowd to sing "Obama, what we gonna do? Inject him with the Wuhan flu," while another part of the song suggested that Chinese people made the coronavirus "in a sushi factory."

However, when crowd members and organizers realized they were being duped, Cohen said they stormed the stage and chased after him as he made his escape.

In his op-ed, Cohen wrote: "I rushed to a nearby get-away vehicle. An angry crowd blocked our way and started pounding on the vehicle with their fists," Cohen said.

"Under my overalls, I was wearing a bulletproof vest, but it felt inadequate with some people outside toting semiautomatic weapons. When someone ripped open the door to drag me out, I used my entire body weight to pull the door back shut until our vehicle manoeuvred free.

Cohen continued: "I was fortunate to make it out in one piece. The next few weeks will determine whether America will be so lucky."

Cohen wrote extensively about the upcoming US election in Time op-ed, writing that moments like the above "are frightening" but that he is "truly terrified for the survival of democracy itself" in the coming weeks.

For the stunt, Cohen had posed as a political-action committee leader and offered to fund the far-right event as well add a new band to the day's schedule.

The stunt was first thought to be for part of his TV show "Who is America," but here Cohen says that it was done while he was shooting his sequel to "Borat," the full title of which is: "Borat Subsequent Moviefilm: Delivery of Prodigious Bribe to American Regime for Make Benefit Once Glorious Nation of Kazakhstan."

The movie will be released on Amazon Prime on October 23, before the US election. The first movie garnered Cohen and his cowriters an Oscar nomination for best original screenplay.

Cohen is due for another good awards season this year with this highly anticipated "Borat" sequel, plus a starring role in Aaron Sorkin's Netflix courtroom drama "The Trial of the Chicago Seven," which features Cohen's best-ever performance.