Scott Disick went all out for Amelia Hamlin’s 20th birthday! After buying her a diamond cross necklace, he splurged on a photograph worth $57K.

Scott Disick, 38, sure knows how to spoil a birthday girl. Days after Amelia Hamlin, 20, and Scott celebrated her 20th birthday in Miami, FL, TMZ reports that the Keeping Up With The Kardashian star was spotted on Wednesday, June 15 purchasing a very expensive piece of artwork for the model: a Saddle II, Paris 1976 vintage silver gelatin print by Helmut Newton reportedly worth $57,000.

Scott headed to Miami’s Design District to purchase the unique gift, which was personally signed by Newton. The historic piece — which shows a model wearing tights and a blazer as she sits atop a saddle — is also considered to be Newton’s most “provocative” piece of artwork. Scott reportedly paid for the work with EthereumPay cryptocurrency. 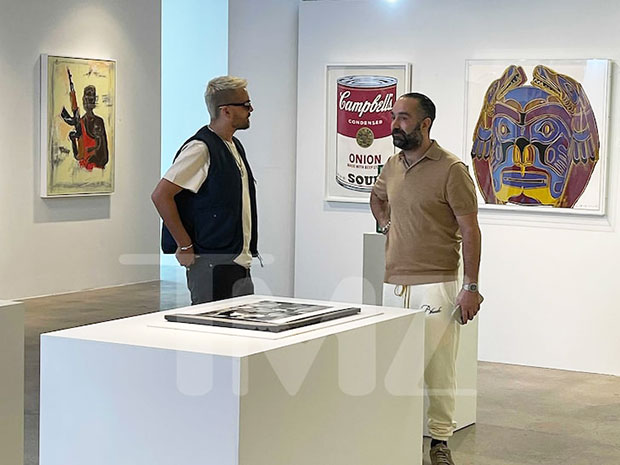 Amelia sizzled in a sheer two piece gold outfit as she hit up Liv nightclub with Scott, who hosted a lavish birthday bash for her. At the club, the Talentless designer presented Lisa Rinna‘s daughter with another spectacular gift: a diamond necklace. In a video uploaded to Instagram, the brunette was in tears as Scott placed the diamond-encrusted cross  around her neck, surrounded by friends. “I’m going to cry,” she appeared to say as she wiped tears from her eyes, smiling.

Scott and Amelia’s romance has been blossoming since last Halloween, when they were spotted heading to the same party. Shortly after, they held hands on a romantic beach date in Malibu, CA, confirming their relationship for the world! In more recent months, the two have jetted off to Miami for several trips, clearly enjoying each other’s company as they soak up the sun and sights of the ritzy South Beach.

For Scott’s birthday in May, Amelia also pulled out the stops. The model gifted Scott with a Harley Davidson motorcycle for his special day, along with a sweet message dubbing the dad-of-three the  “light of her life.” She added, “Happy birthday my love. You light up life, and make my world better. I can’t imagine what I would do without you. Thank you for being you. the most caring, loving, special person on this plant. I’m so lucky. I’m so blessed to have met you. I love you.”