Home » Celebrities » Serena Williams: ‘I love representing the beautiful dark women out there’

Serena Williams: ‘I love representing the beautiful dark women out there’ 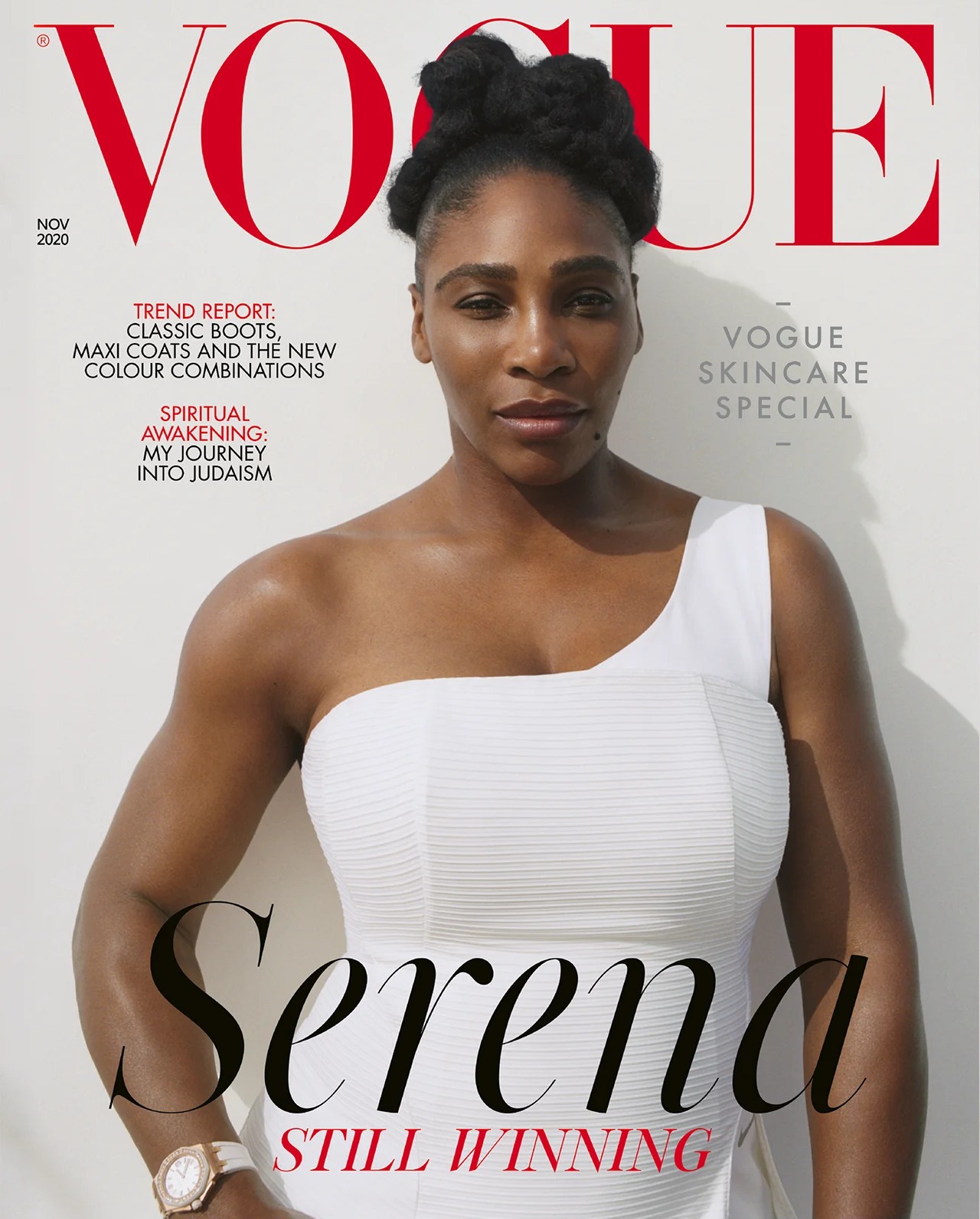 Serena Williams’ 2020 tennis season is over. It was over the minute she withdrew from her second round match at the (pandemic-belated) French Open. But just because tennis is over for Serena this year, doesn’t mean that she’s going to stay quiet. Serena covers the November issue of British Vogue. The dress she’s wearing on the cover is yet another collab between Nike and Off-White, meaning Virgil Abloh, who collaborates with Nike on many of Serena’s recent tennis kits, including the black catsuit (French Open ‘18), the deranged ballerina look (US Open ‘18) and the cute two-piece graffiti look (FO ‘19). So, what IS Serena promoting? Everything, really, but mostly she’s just being Serena and talking about what she wants to talk about.

Being a black woman and a GOAT: “Underpaid, undervalued. [But] I’ve never been a person that has been like, ‘I want to be a different colour’ or ‘I want my skin tone to be lighter.’ I like who I am, I like how I look, and I love representing the beautiful dark women out there. For me, it’s perfect. I wouldn’t want it any other way.”

In the wake of the murder of George Floyd: “Now, we as Black people have a voice – and technology has been a huge part of that. We see things that have been hidden for years; the things that we as people have to go through. This has been happening for years. People just couldn’t pull out their phones and video it before… At the end of May, I had so many people who were white writing to me saying, ‘I’m sorry for everything you’ve had to go through.’ I think for a minute they started – not to understand, because I don’t think you can understand – but they started to see. I was like: well, you didn’t see any of this before? I’ve been talking about this my whole career. It’s been one thing after another.”

Her venture capital firm and her size-inclusive fashion label, Serena. “Tennis is a small play in the whole scheme of things. In this society, women are not taught or expected to be that future leader or future CEO. The narrative has to change. And maybe it doesn’t get better in time for me, but someone in my position can show women and people of colour that we have a voice, because Lord knows I use mine. I love sticking up for people and supporting women. Being the voice that millions of people don’t have.”

A renewed appreciation for her own body. “How amazing that my body has been able to give me the career that I’ve had, and I’m really thankful for it. I only wish I had been thankful sooner. It just all comes full circle when I look at my daughter.”

Changing beauty standards: “When I was growing up, what was celebrated was different. Venus looked more like what is really acceptable: she has incredibly long legs, she’s really, really thin. I didn’t see people on TV that looked like me, who were thick. There wasn’t positive body image. It was a different age. I’ve never been like anybody else in my life, and I’m not going to start now.”

She’s right that Venus was always held up as being more “acceptable” in the tennis world because Venus was tall, slender, graceful and elegant. But let’s be clear, BOTH sisters got tons of racist sh-t thrown at them. They still do.

Personally, I love that Serena has so many side projects because I feel like that reflects her active mind, and it reflects that she isn’t just tennis, she’s interested in tons of other stuff. There are always commentators who are like “if she wants to win, she needs to focus exclusively on tennis.” I’m not so sure. But I will say this: Serena seems sort of at peace these days. I think she keeps playing because she wants to play, and because why leave that money on the table. But I could also see her calling it a day in the next year or so.

Here’s Serena’s bag check – it’s funny because it’s just Serena name-dropping all of her sponsorships and side-projects. I’m shocked that she wasn’t like “and here’s my Chase Mobile app blah blah blah and the electronic key to my Lincoln.”