Stacey Dooley: ‘My heart is breaking’ Strictly star speaks out over violent video

Strictly Come Dancing’s 2018 winner Stacey Dooley, 33, has shared how her “heart is breaking” after the Mayor of London, Sadiq Khan, 49, shared a distressing video of crowds of people being violent towards police officers in Parliament Square in London on Saturday. The BBC documentary film-maker expressed her thoughts over the video on Twitter last night.

My heart is actually breaking.

It came as the Mayor shared a video of violence taking place on Bridge Street in view of his one million Twitter followers.

Sharing a video with the caption: “More violence against police on Bridge Street, next to Big Ben. Everyone who intended to come to BLM protests today but didn’t has reduced the risk of confrontation with these extreme right-wingers, and the spread of COVID19.

“To those in Parliament Square: to prevent further violence and the spread of the virus in our city, please leave now.”

Soon after Stacey saw the Mayor’s statement, the Strictly star decided to open up on the matter with her 341,000 followers. 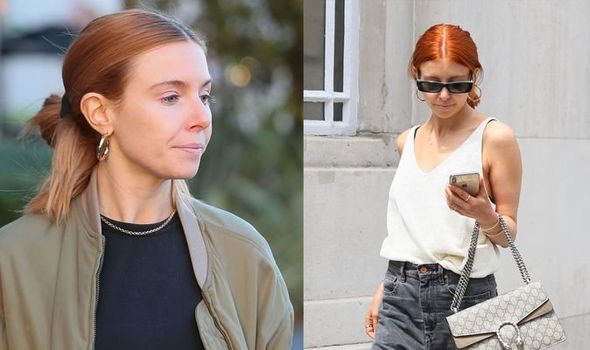 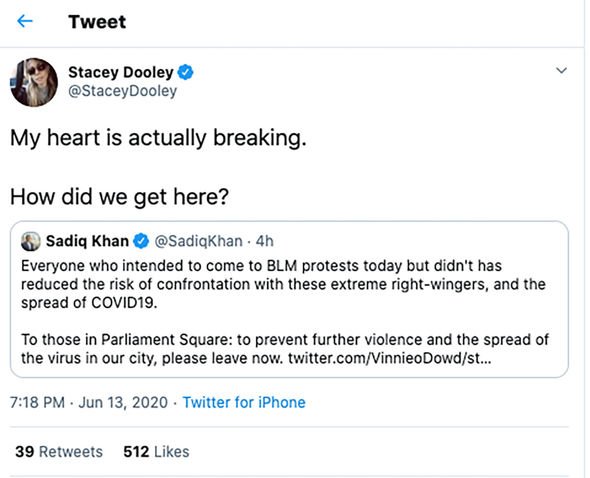 The journalist wrote last night: “My heart is actually breaking.

Stacey continued to update her followers with more footage of the violence in an additional tweet which read: “They are behaving like this because black people want equality in 2020.”

However, after one Twitter user replied: “No they’re not these are just thugs,” Stacey continued to explain: “Of course they’re thugs. They’re morons. 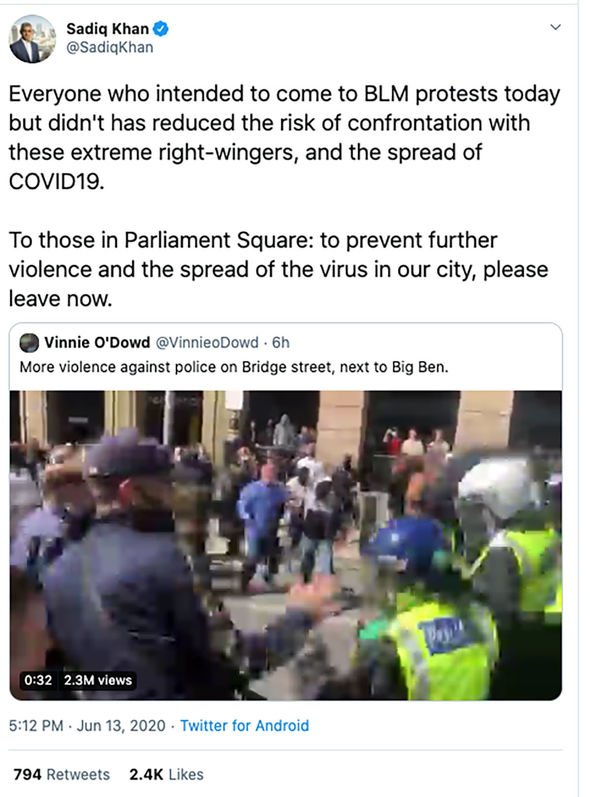 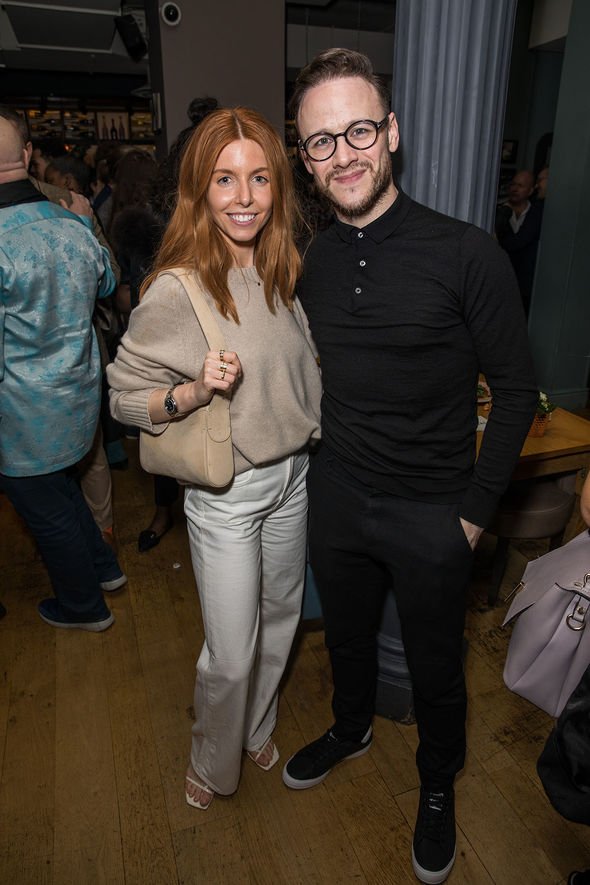 “My point is, imagine feeling deep anger and outrage, because black people, who are sick of being killed, have taken to the streets to exercise their right to protest. They’re pitiful.”

Shortly after Stacey shared her concerns online, many fans of the presenter waded in to comment on the “sickening” video.

One wrote to the BBC favourite: “It’s hard to take after everything the entire UK has been through over the past 12weeks or so…

Another quickly penned: “It’s horrendous to watch what is happening in this country of ours.”

A third went on to say: “Stacey, I’m also sickened and very saddened by all of this.

“Surely there has to be a better way of vocalising opinions and not wanton violence such as this.”

Meanwhile, Stacey’s boyfriend and former Strictly Come Dancing professional dancer Kevin Clifton, 37, recently admitted what she regretted most while she was on the BBC competition.

It comes after Kevin was joined by EastEnders actress and former dance partner Kellie Bright, 43, on his podcast The Kevin Clifton Show.

Speaking to Kellie, Kevin discussed: “It’s funny, for this episode I was watching week seven, and Stace was sat watching and looking through them.

“She kept going, ‘Oh, I’m well jealous that you guys did this. Oh, we never got to do that one. I wish we would have done that one.'”

Kellie interjected: “I think you always feel like that because I still. And you know what I’m going to say, don’t you? I still want to do the Argentine Tango with you,” to which Kevin added: “Right, yeah. Because we never got to do it.”

The Linda Carter actress went on to say: “We never got to do that one! And I really want to have a go.”

Kevin then revealed: “It’s the same as Stace. We never did the Argentine Tango, and she sort of says the same, ‘Oh, we never got to do that.'”