While The Steph Show host Steph McGovern, 37, has been hosting her new Channel 4 chat show from home during the coronavirus lockdown, the presenter spoke out about a “disruptive” change that had to be done to their house. Steph revealed how presenting her new show felt “very weird” with the given circumstances.

We’re lucky we’ve a house that made it possible.

Talking about her most present project, The Steph Show, which she was planning since last Autumn, Steph revealed what it has been like to present her new show from home with her five-month-baby and partner.

Talking to Radio Times, the Channel 4 presenter spoke about the practicalities of hosting a TV programme from her home.

Steph said: “A couple of technicians set it all up under distancing guidelines, and then I did a hell of a lot of tidying.

“I have a five-month-old baby so my partner and I moved all her stuff to the “good room” next door.” 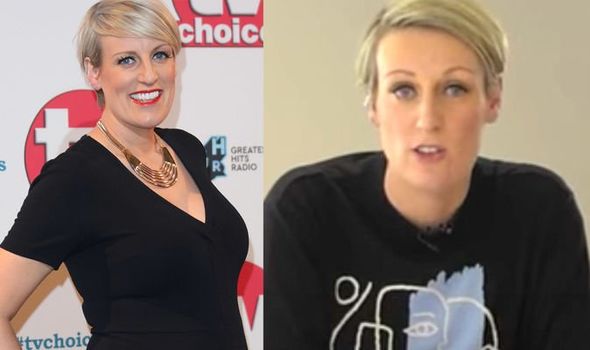 Steph then went on to say how the production team is made up of 12 people, four in her garage and eight “either outside or in one of the four trucks on the drive and in the garden.”

The former BBC Breakfast star then went on to reveal how they had to make some last minute changes around her house to ensure filming can happen safely regarding the coronavirus guidelines.

She told the publication: “We’ve had to add a Portaloo and set up a hand sanitising station, so we’re lucky we’ve a house that made it possible.

“The first day was disruptive for the neighbours, but they’ve been great.”

While Steph mentioned there have been a few times where her guests on her show couldn’t work, she admitted how it makes for good entertainment.

The new mother said: “But viewers quite like it when the occasional thing goes wrong.

“My style is more rough and ready than perfectly polished, anyway.”

Meanwhile, Steph recently spoke to Simon Rimmer, 56, on Channel 4’s Sunday Brunch about her new show and revealed how gin companies have picked up on how many bottles of gin she had behind her while hosting Have I Got News for You.

The host responded to the chef: “I hosted Have I Got News for You from here, the number of gin companies that spotted their gins in the background on my cabinet, I was like, ‘This is hilarious.’

“You just forget, don’t you, what’s in your house because you’re always in it, you don’t really look at things as closely as other people do.”

Steph admitted to Simon: “I do have to look at what’s around to make sure that I don’t get into trouble.”

The host of the podcast Not Bad for a Monday, quit BBC Breakfast as a main business presenter and a regular presenter, last year in October.

The BBC star was intending to host her planned show Steph’s Talks at Channel 4’s studio in Leeds.

However, due to the coronavirus outbreak, it changed to The Steph Show which is now aired from her living room.

Steph’s career in TV journalism began with some work experience with BBC’s Tomorrow’s World programme, which led on to a role as a researcher in the BBC’s current affairs department.