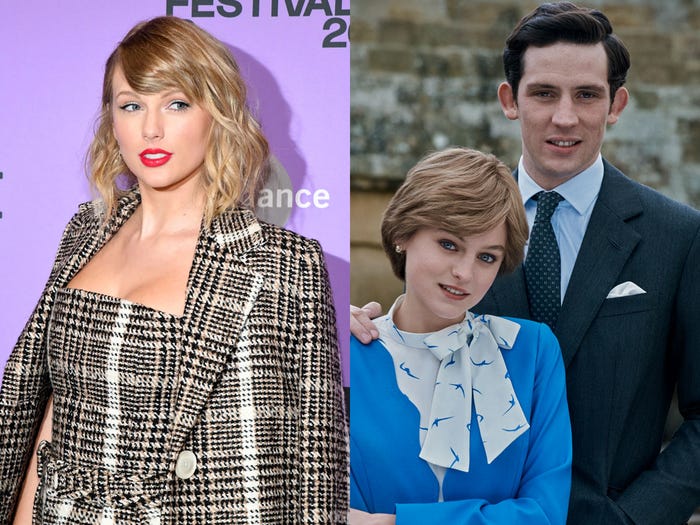 Taylor Swift's fans are convinced that she watched season four of "The Crown" before writing "Tolerate It," the fifth track on "Evermore."

The song takes the perspective of a person desperate for validation from an unaffectionate partner, leading many people to think of Princess Diana (Emma Corrin) and Prince Charles' (Josh O'Connor) rocky marriage on season four of Netflix's hit show, which shows a fictionalized version of real events.

Season four premiered on November 15, when Swift was still creating the album, meaning she could've been watching Charles and Diana's story as she wrote. (Swift confirmed the final song written for the album, "Happiness," was finished a week before the release of "Evermore.")

And since Swift confirmed that "Evermore" consists of "imaginary/not imaginary tales," and she's been influenced by Netflix content before ("Death by a Thousand Cuts was inspired by the movie "Someone Great"), it's entirely possible that "The Crown" influenced her work, though the artist hasn't confirmed that she watched the series.

Because "Tolerate It" focuses on many of the same themes that appear on season four of the show — like infidelity, mental health, and a failing relationship — fans speculated that Swift drew inspiration from the latest season of "The Crown."

"Evermore" listeners dissected the song's lyrics to see if they synced up with the royals' on-screen story.

They claimed that lines like, "You're so much older and wiser, and I / I wait by the door like I'm just a kid / Use my best colors for your portrait / Lay the table with the fancy s—," may have referenced the royals' 12-year age gap.

Fans also wondered if Swift's lyrics, "If it's all in my head tell me now / Tell me I've got it wrong somehow," hinted at Charles' insistence that his wife wasn't mentally stable on the show.

And the line, "I take your indiscretions all in good fun," immediately conjured thoughts of the love triangle between Charles, Diana, and Camilla Shand on season four.

If Swift did watch "The Crown" and incorporated the storyline into her work, she's not the only one with a renewed interest in the royal family's treatment of the late princess.

Season four of "The Crown" has revived conversations surrounding Diana and Charles, who married Camilla years after Diana's death in real life.

Charles and Camilla, the Duchess of Cornwall, even had to disable their Twitter replies after "The Crown" fans flooded the comment section with messages about Diana.