These 20 ‘Home Alone’ Zoom Backgrounds Include So Many Iconic Scenes

Although it’s been 30 years since Home Alone first graced audiences with its out-of-the-box premise, it’s still on top of almost everyone’s holiday movie list. If you’re preparing for virtual parties or just want to bring a little Kevin McCallister to your end-of year Zoom meetings, you can bring the holiday spirit of Home Alone to your calls with Zoom’s virtual background feature. There are plenty of classic moments in the ‘90s film to choose from, but you can’t go wrong with these 20 Home Alone Zoom backgrounds.

Home Alone is undoubtably quotable, but there are some memorable moments best served with the accompanying scene. Enter Zoom backgrounds. Now, you can celebrate with a background that (almost) screams, "Kevin!" To download these Zoom backgrounds, you’ll need to right-click to save them to your computer. Then, you’ll upload them to Zoom by heading to Settings and clicking on the Backgrounds & Filters tab. From there, select the plus sign (+) to upload the image of your choice.

From iconic moments like Kevin’s after shave scream to his scare tactics — "Keep the change, ya filthy animal" — these backgrounds for Zoom will fit the bill for any McCallister stans. Plus, some shots have some truly festive AF vibes.

You can’t forget when the McCallister’s house is packed with family for the holidays, and there’s no cheese pizza left for Kevin, which leads to him tackling Buzz, spilled milk, and a whole lotta glaring faces. 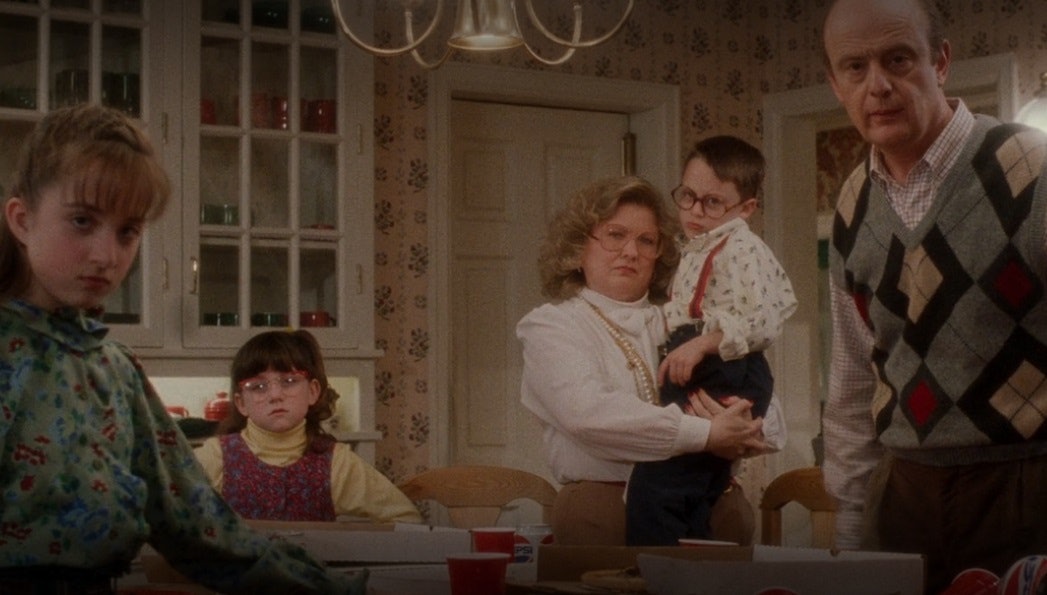 Fuller might remind you of one of your own cousins as a kid, and even if he doesn’t, the close-up shot of him not going easy on the Pepsi is a classic. 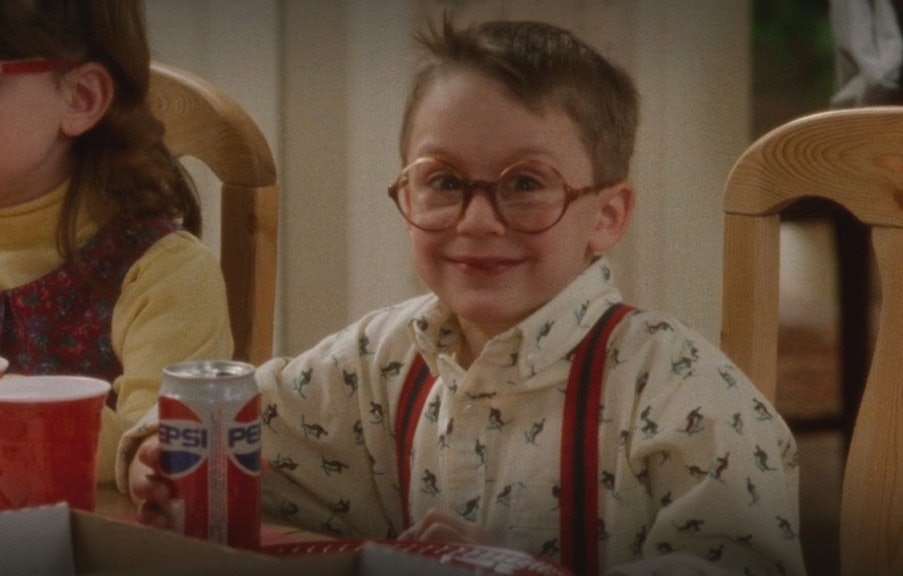 That moment when Kevin realizes he’s home alone is iconic. 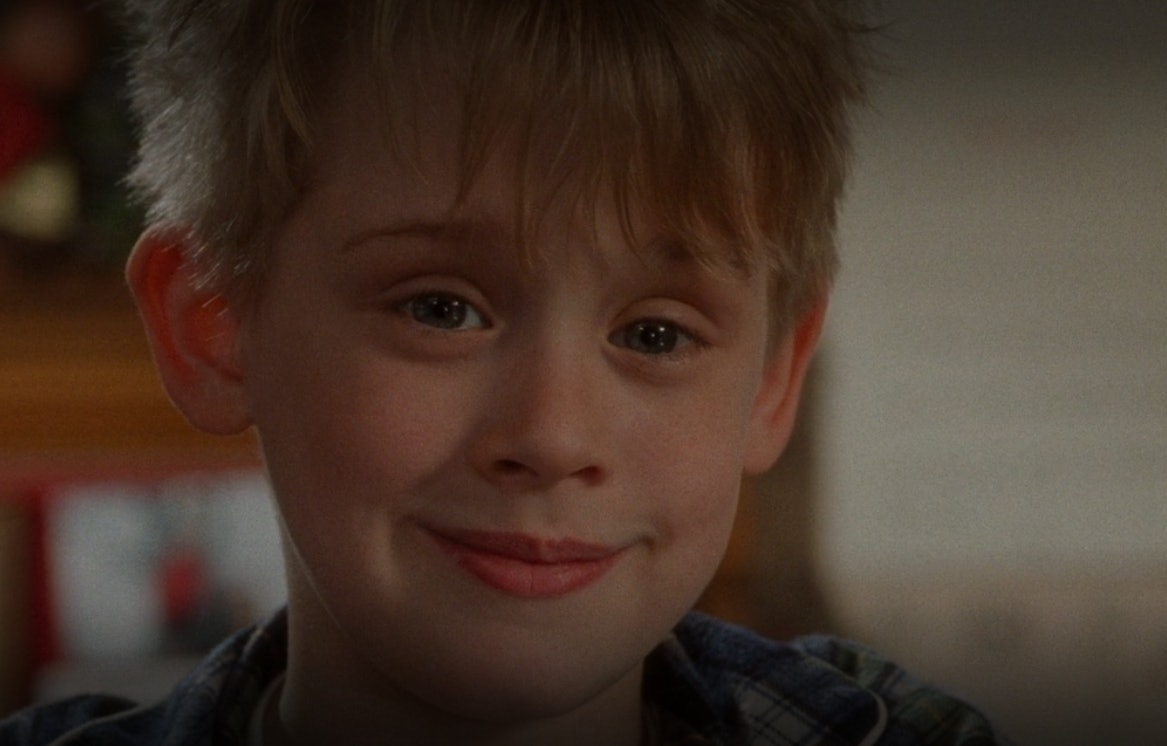 Catherine O’Hara’s face when she realizes Kevin is home alone is so on point. 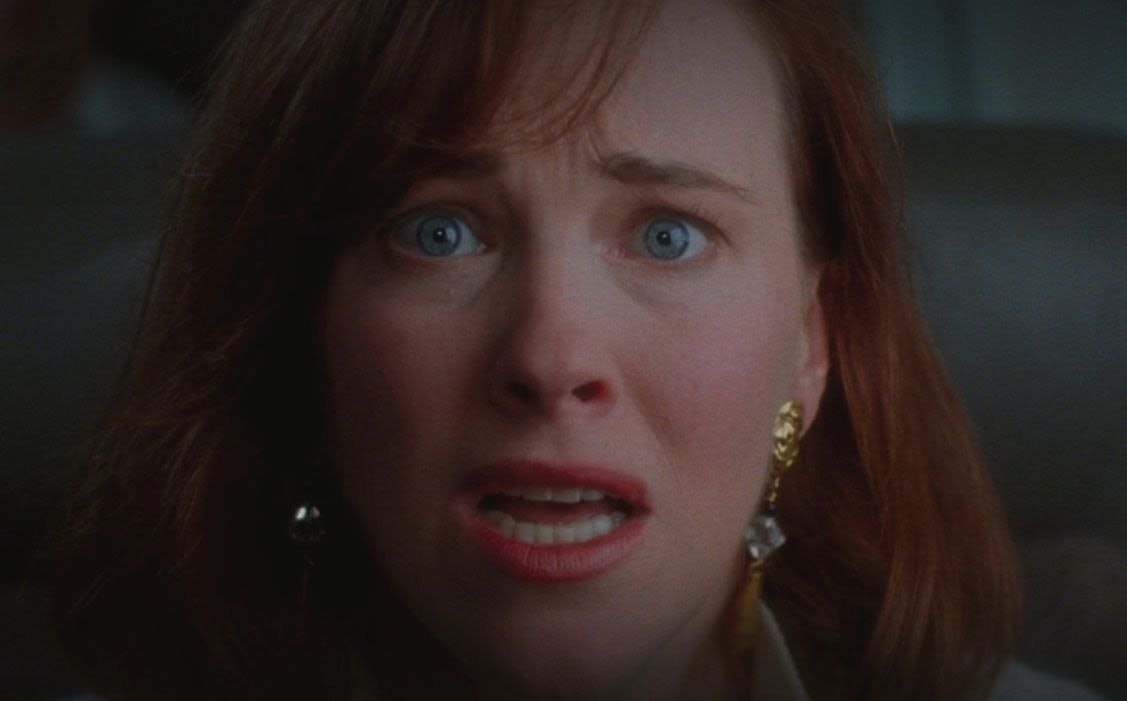 The teen delivering pizza from Little Nero’s Pizza in the flick starts the movie off right, by knocking over the McCallister’s statue with his car. 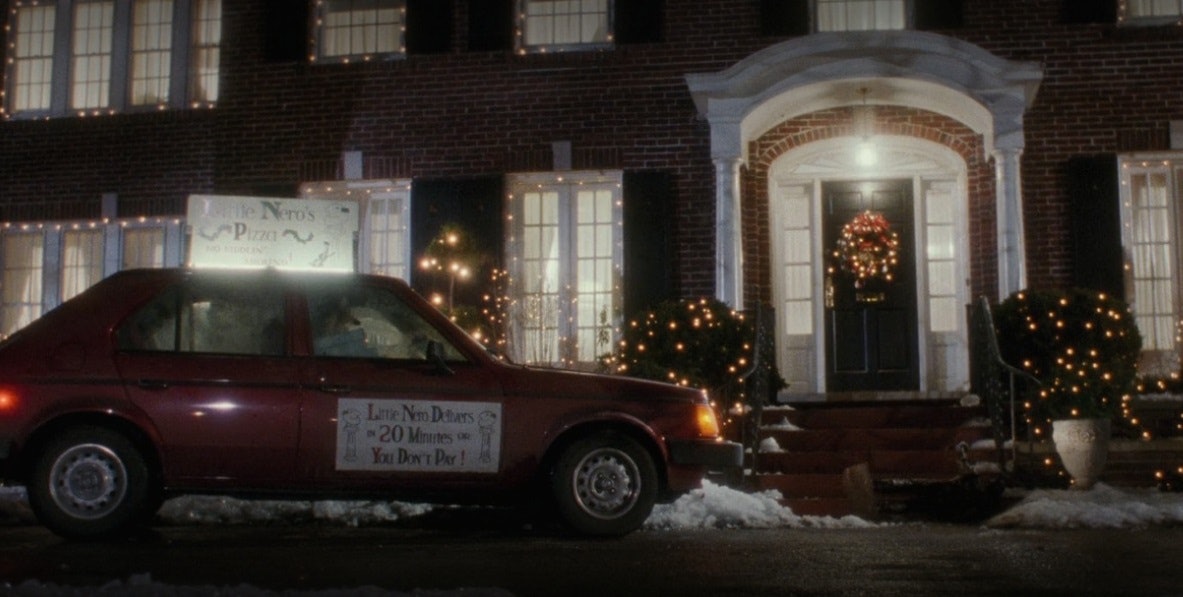 Kevin’s morning is already off to an odd start with some serious bed head, and then he finds out his family is gone. 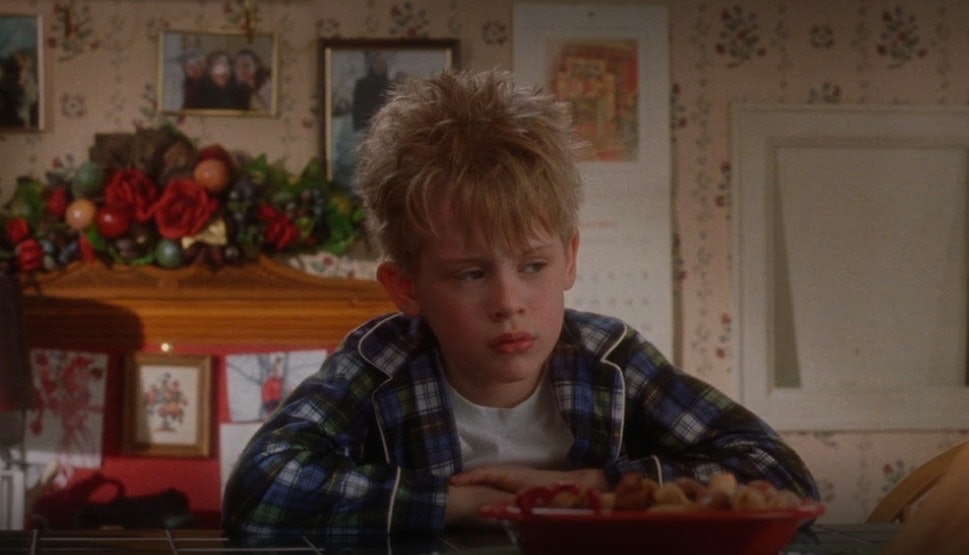 7. Sledding Down The Stairs

The first thing to do when you’re an 8-year-old who’s home alone is sled down the stairs. 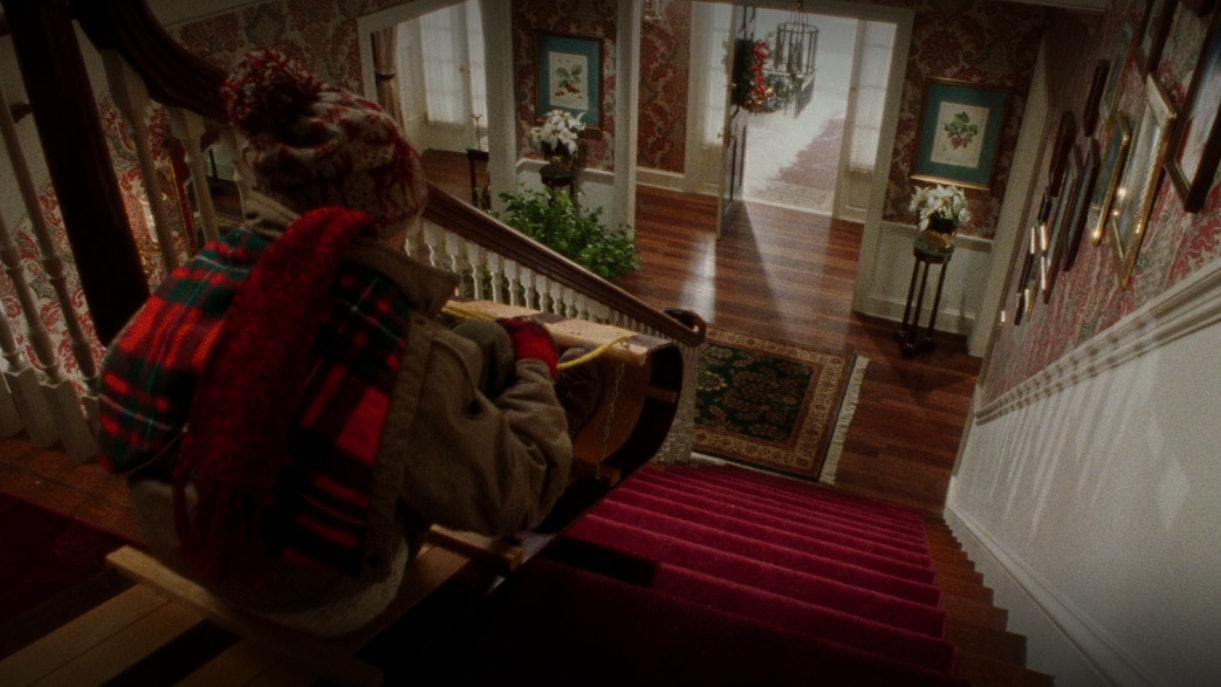 8. The After Shave Scream

Then Kevin learned being an adult isn’t always all fun and games, especially when it comes to after shave. 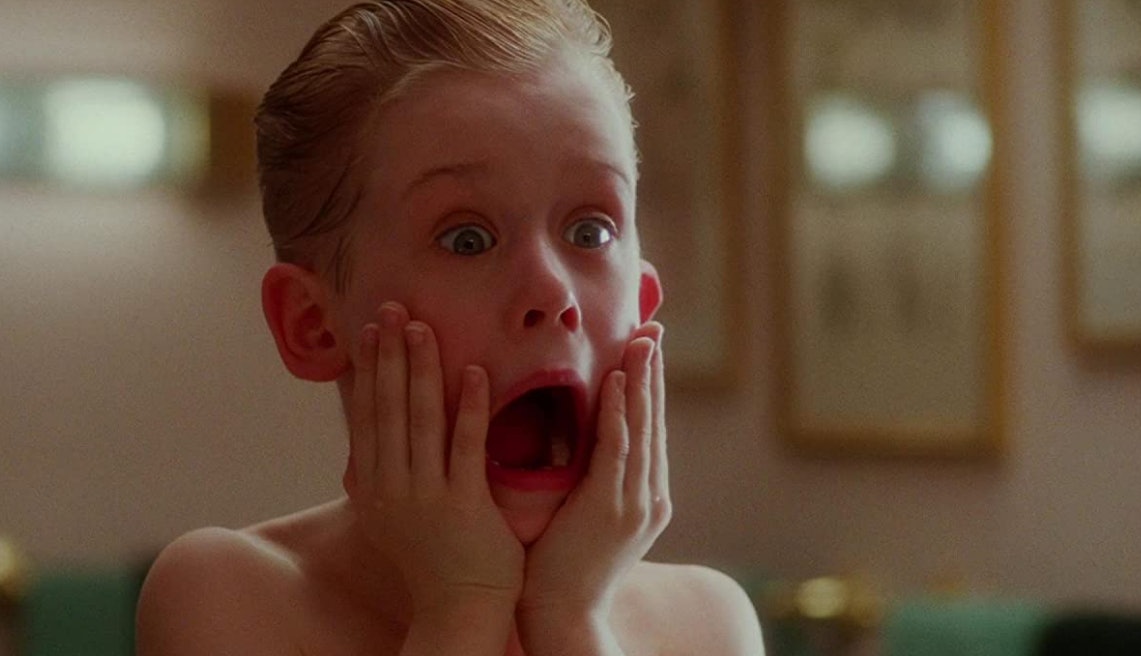 Macaulay Culkin had a ton of iconic screams in Home Alone, but this one looking directly into the camera is one of the best. 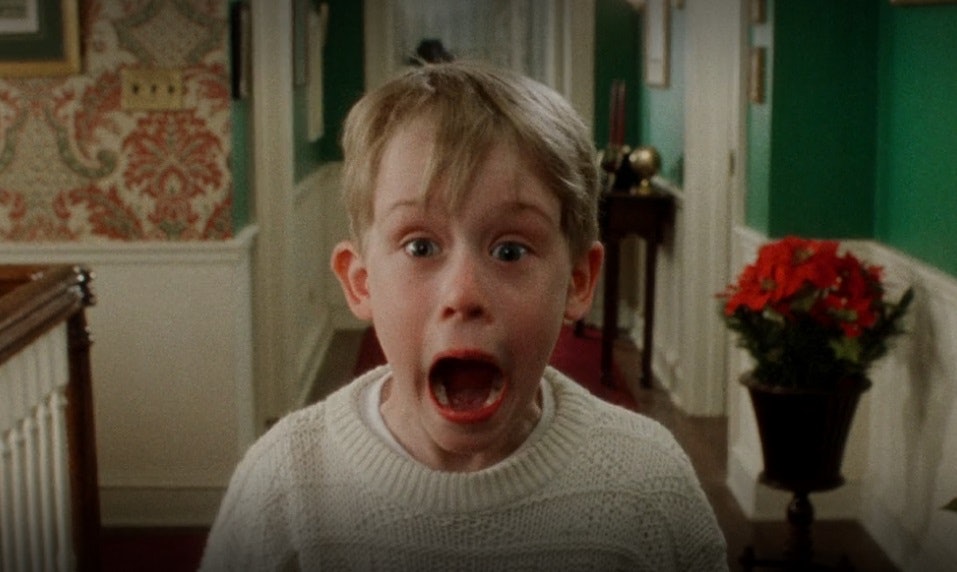 10. The Mountain Of Ice Cream

Kevin lived out every kid’s dream with a mountain of ice cream and a forbidden movie, aka "eating junk and watching rubbish." 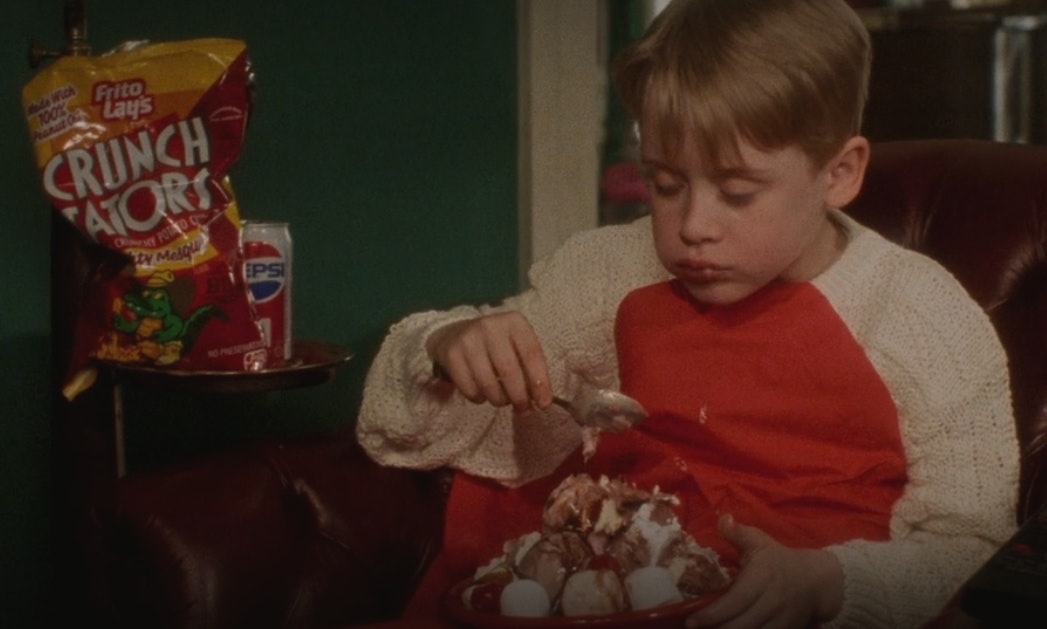 What’s a holiday movie with a tree decorating scene? But of course, this is when Kevin starts planning to prevent Harry and Marv from trying to rob the house. 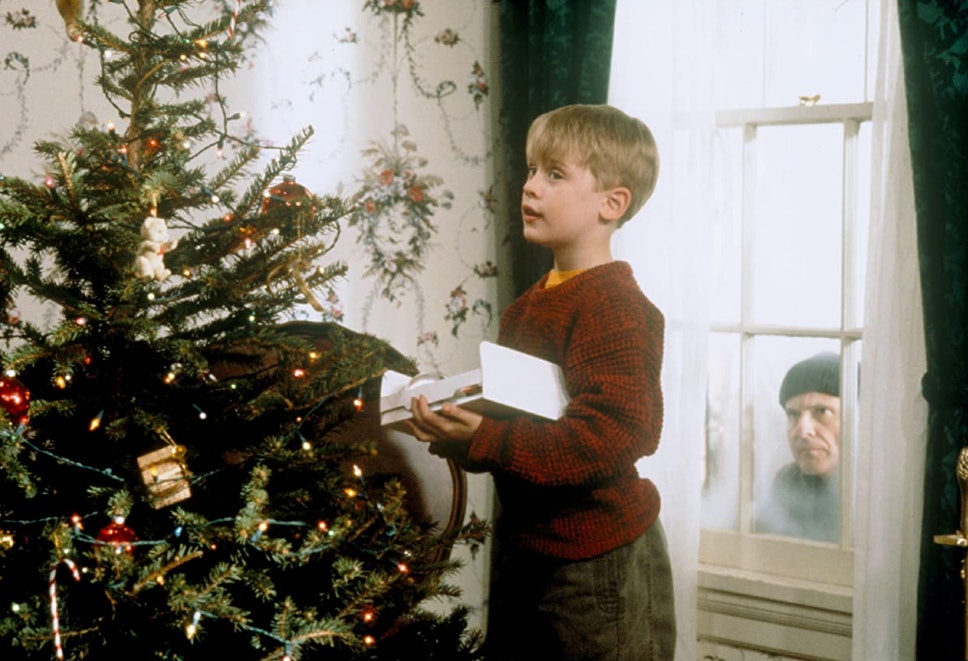 There’s yet another Kevin scream when Harry and Marv almost hit him with their van. 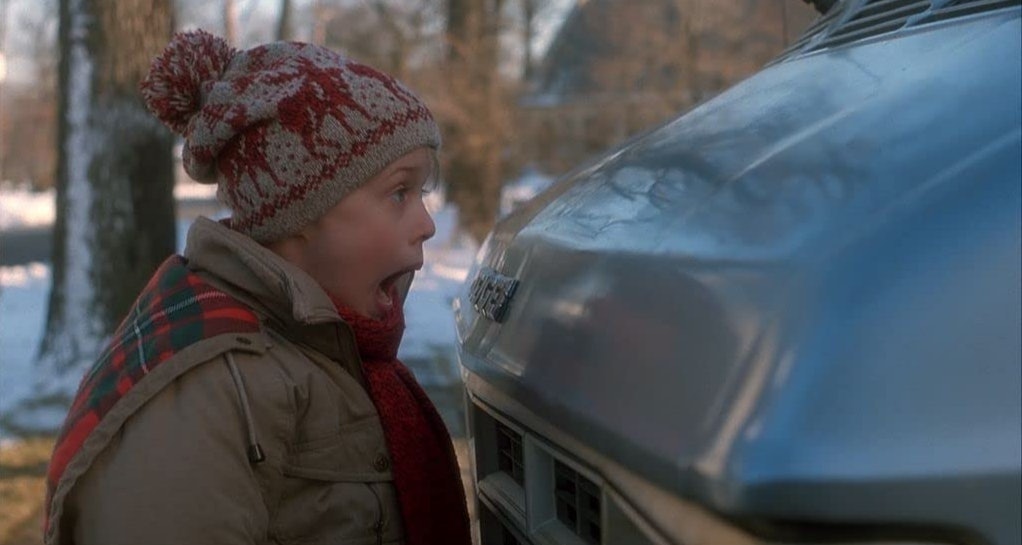 One of the key things that gets Kevin recognizing Joe Pesci’s Harry is his shiny gold tooth. 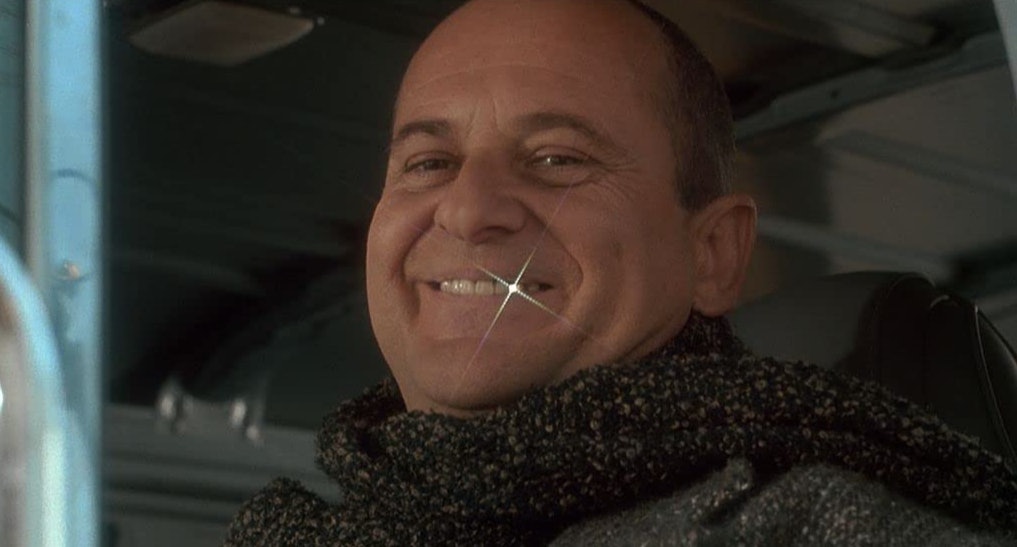 14. Kevin Jumping On The Bed

Kevin gets into all kinds of antics, but he’s a pro at jumping on his parents’ bed. 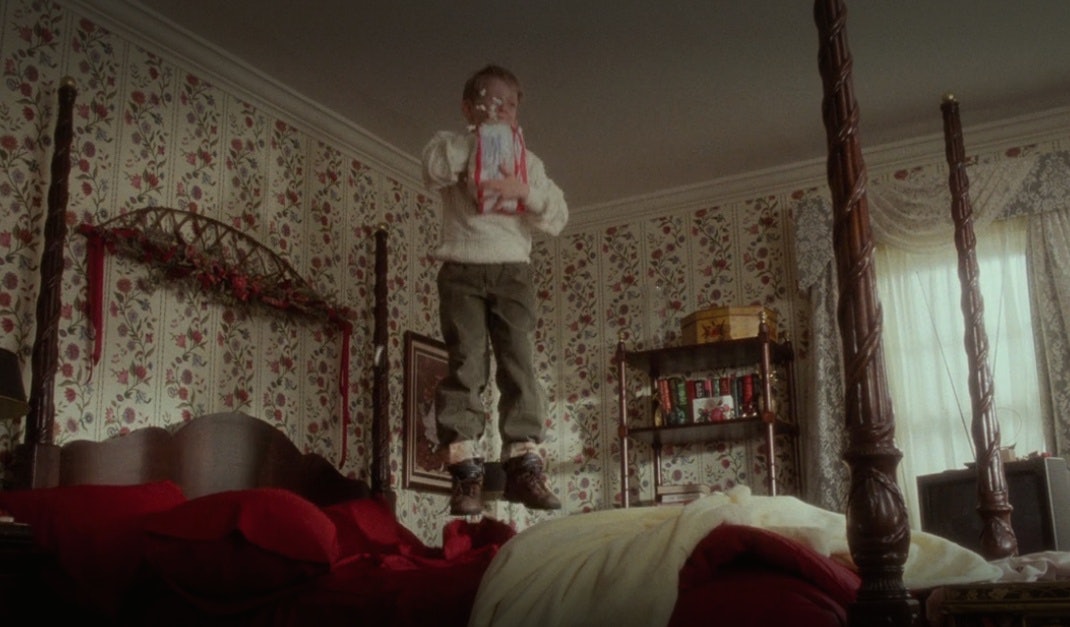 Kevin’s rigged party scene with the mannequins from his basement, as well as a clutch Michael Jordan cutout, is nothing if not pure genius. 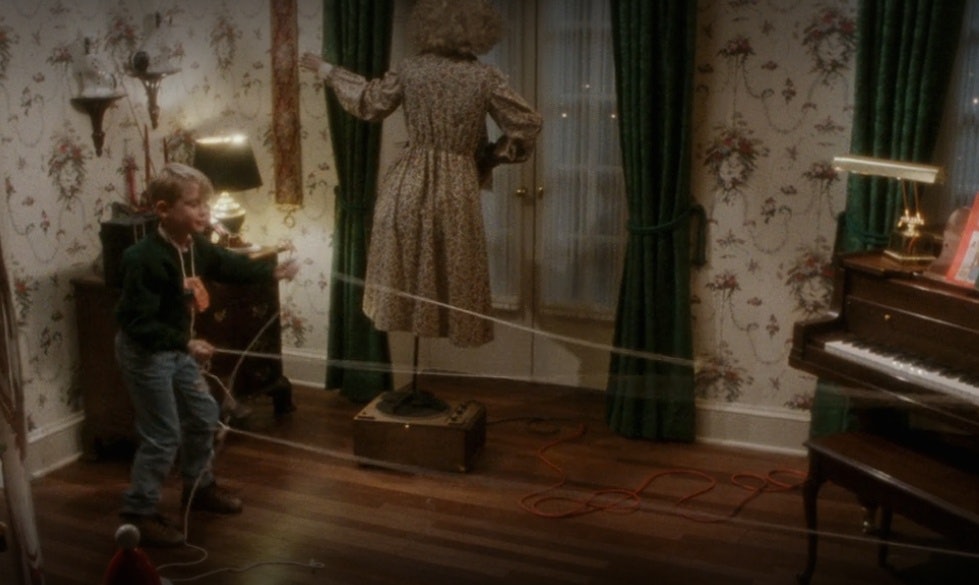 16. Kevin Singing Into His Comb

TBH, Kevin’s rendition of "White Christmas" could give Bing Crosby a run for his money. 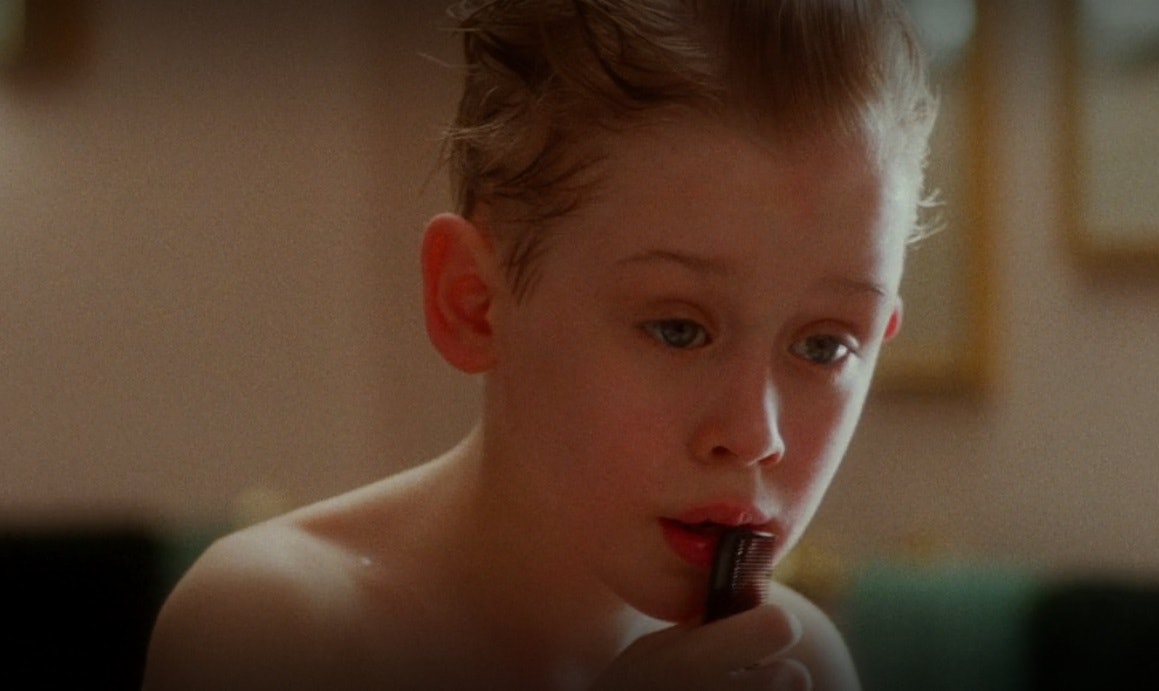 One of the most memorable moments is Kevin using the fake movie Angels with Filthy Souls as a way to scare people off, including Marv. 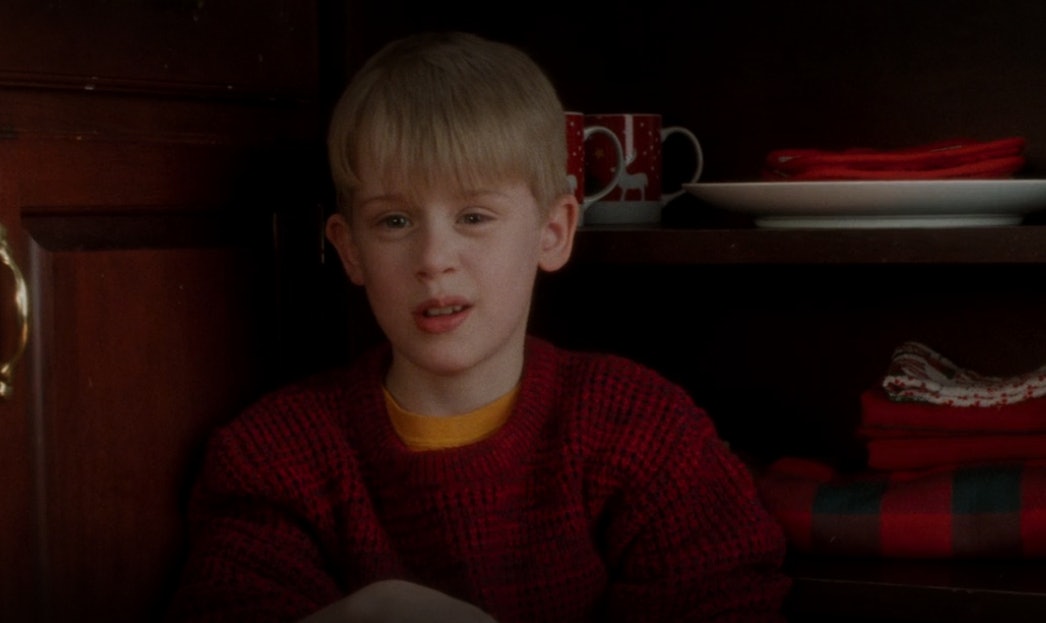 18. Asking Santa For His Family

When Kevin rushes to ask a Santa impersonator for his help, he’s not too much help, but he does give Kevin some Tic Tacs. 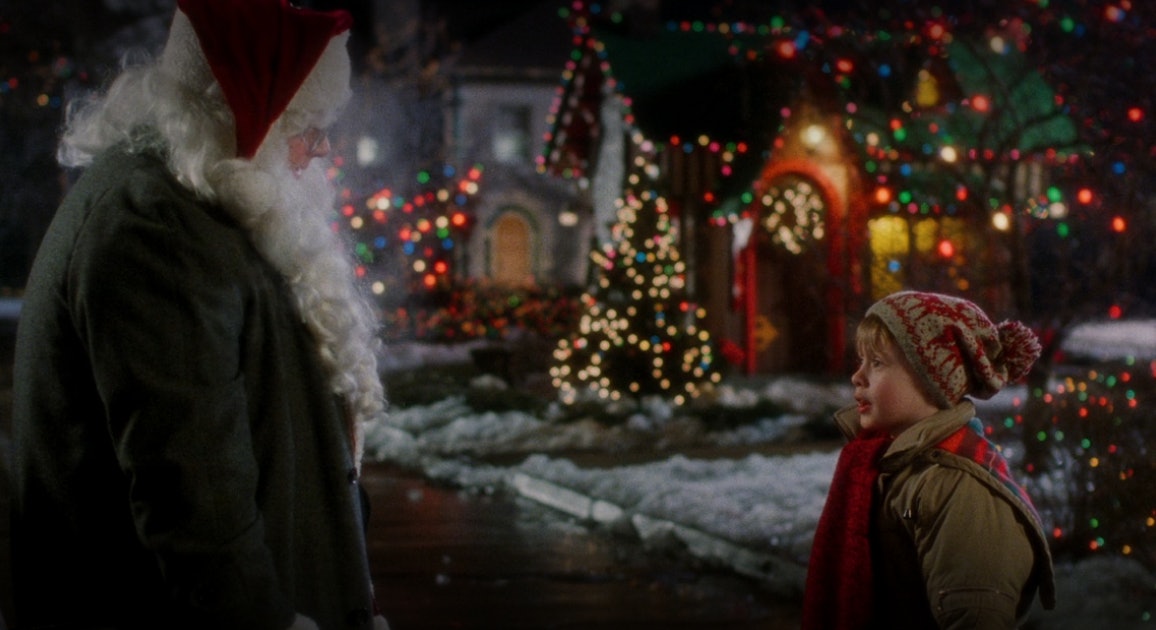 That moment when Marv asks Harry why he’s dressed like a chicken: 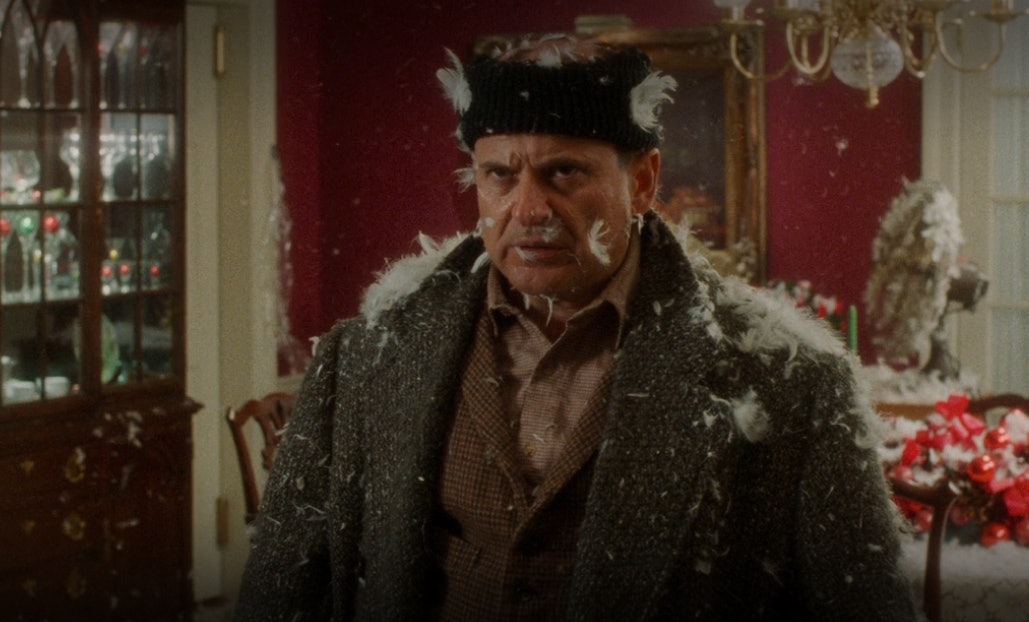 The movie wouldn’t be anything without the happy ending when Kevin is reunited with his family after his adventure. 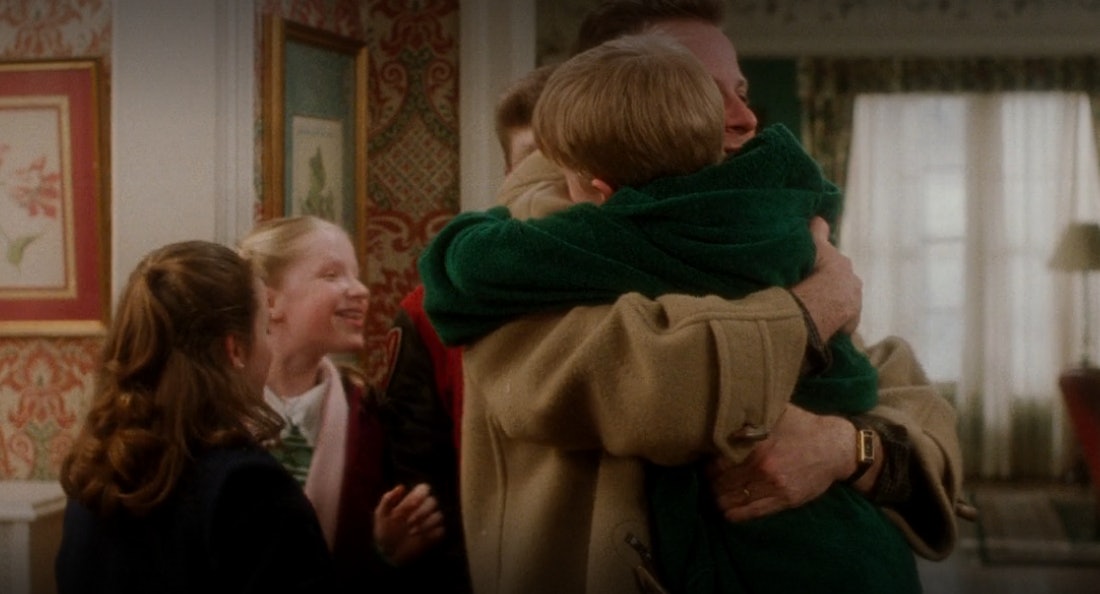