Carlos Villamizar, one of the three men, told reporters in his attorney's office before surrendering that he had no prior knowledge that the services were being ended and that he was innocent of any crimes.

“It was a total surprise,” he said, choking up with emotion over concern for his family and two young children. “I'm innocent.”

Villamizar said he was a victim along with at least 600 fellow DirecTV employees in Venezuela who lost their jobs under the decision made by the company's executives in the U.S. Villamizar then left the lawyer's office and surrendered at a feared Caracas jail called the Helecoide, where the other two men were believed to be held.

The two other executives, Héctor Rivero and Rodolfo Carrano, were arrested Thursday, said lawyer Jesús Loreto, who is representing the trio. He called their detention unjust, saying the men had cooperated with authorities, appearing this week first at chief prosecutor’s office and then the Venezuelan Supreme Court.

All three of the men are Venezuelan citizens, said Loreto, adding that he didn't know the charges. Whatever the men were accused of was “senseless," he said. 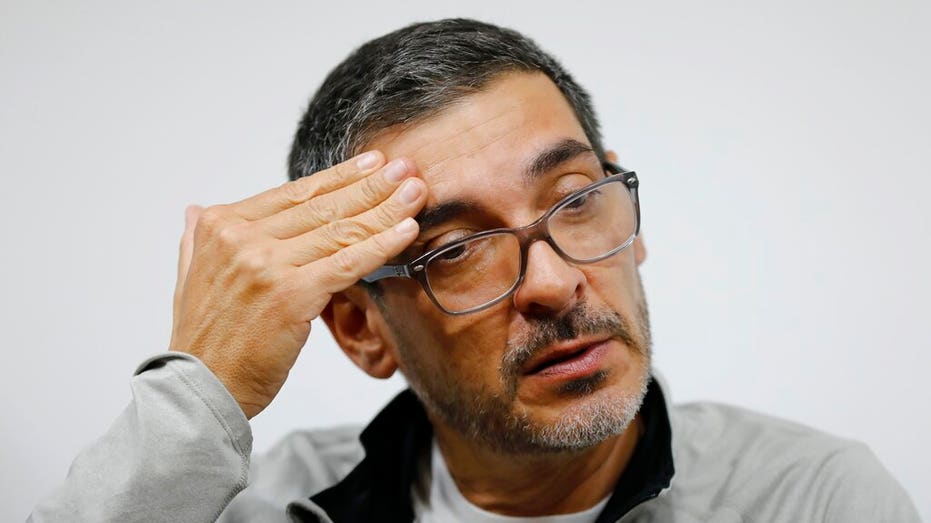 Carlos Villamizar, a DirecTV vice president, makes a statement to reporters before turning himself over to authorities, in Caracas, Venezuela, Friday, June 5, 2020. Venezuelan authorities have jailed Villamizar and two other local DirecTV executives

DirecTV abruptly ditched its popular satellite TV service on May 19. It cited U.S. sanctions that prohibited DirecTV from broadcasting channels that were required by the administration of President Nicolás Maduro.

The administration of President Donald Trump has increased political pressure on Maduro in what it calls a “maximum pressure” campaign aimed at ending the socialist leader’s rule, which it says has led the once wealthy oil nation into ruin.

The abrupt end to DirecTV service caused an uproar among leaders in Maduro's government, who accused the company of denying its citizens rights to information.

Residents of Caracas for at least two nights following the announcement mounted protests from inside their homes, banging pots and pans in unison. They lost service in the middle of a quarantine order for the coronavirus pandemic, and many people in poor neighborhoods have no other form of receiving movies, news and sports.

Days after AT&T cut the service, Venezuela’s high court ordered the nation’s telecommunications agency to seize satellite dishes and office space at transmission centers. It also said DirecTV programming should immediately return to the airwaves, in an order that was not likely to be heeded.

Officials in Maduro's government didn't comment on the arrests.

Lori Lee, CEO of AT&T Latin America, said in a statement that the arrests were “inexplicable” considering that the three executives in Venezuela had nothing to do with the shutting down of the service.

“To the contrary, this decision was taken by AT&T executives in the United States, without the knowledge or participation of these individuals or any other former Venezuelan employees,” Lee said.

AT&T joined a number of other U.S. companies — General Motors, Kellogg and Kimberly-Clark — that have abandoned Venezuela due to shrinking sales, government threats and the risk of U.S. sanctions.

AT&T hadn’t made money from its Venezuelan operations for years due to strict government controls that keep the price of its packages artificially low — a few pennies per month. The situation has become so dire that DirecTV in 2012 stopped importing set-top boxes, choking its growth. In 2015, it wrote down its assets in the country by $1.1 billion.