Home » Celebrities » Was Amity's house of horror a hoax? TOM LEONARD looks back on the case

Was Amity's house of horror a hoax? TOM LEONARD looks back on the case

Was Amity’s house of horror all a hoax? With demonic faces and keyholes oozing green slime, it was the ‘true-story’ film that terrified the world. As the man who inspired it by murdering his entire family dies in prison, TOM LEONARD looks back on the case 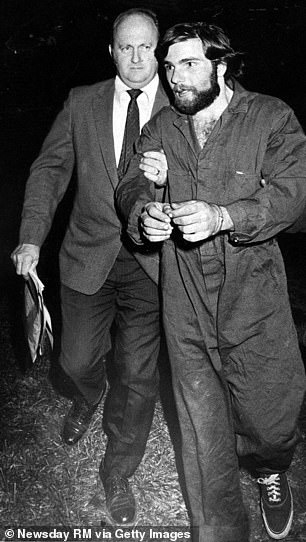 DeFeo (pictured being led away by a cop in 1974) was sentenced to 25 years to life for each of the murders and, after repeatedly being denied parole, remained behind bars in New York state for the rest of his life

On the evening of November 13, 1974, Ronald ‘Butch’ DeFeo rushed into a bar in the quiet Long Island town of Amityville, and set in train what would become one of the most successful horror stories in Hollywood history.

He told the bar’s startled occupants that he had just found his parents shot dead.

When several of them accompanied him back to his family’s six-bedroom Dutch Colonial-style house, they found not only the bodies of Ronald DeFeo Sr and his wife Louise, but also those of their four other children — Dawn, 18, Allison, 13, Marc, 11, and John, nine.

The adults had both been shot twice while the children each just once, in the back. They were all face down in their beds.

DeFeo, 23, a thief and drug addict with a reputation as a hard-drinking brawler, initially told police that his family had been killed by the Mafia.

However, he soon admitted that he was responsible, going room to room with a rifle shortly after 3am.

‘Once I started, I just couldn’t stop,’ he told investigators.

At his trial, DeFeo offered an insanity plea, saying he had killed his family in self-defence after hearing mysterious voices telling him they were plotting to do the same to him.

Prosecutors were never able to explain how the defendant was able to kill every one of them without any signs of a struggle, nor the neighbours hearing any sounds of gunfire — DeFeo did not have a silencer on his high-powered rifle.

He was sentenced to 25 years to life for each of the murders and, after repeatedly being denied parole, remained behind bars in New York state for the rest of his life.

Ronald DeFeo died aged 69 in custody last Friday, all but forgotten by the outside world. But the house in which he slaughtered his family survives — and it remains a macabre testament not just to mass murder but to bone-chilling stories of evil and the paranormal.

It became the haunted setting of The Amityville Horror, a best-selling 1977 book by American author Jay Anson based on the terrifying experiences claimed by the family who moved into the house a year after the killings.

The book was adapted into the 1979 horror film of the same name starring James Brolin, Rod Steiger and Margot Kidder, and gained international notoriety. Suddenly, no one wanted to go down to the basement alone.

For years, the gruesome story has been subject to challenges and even lawsuits over its veracity.

But this has only fuelled interest in the grisly events inside 112 Ocean Avenue — dubbed ‘Long Island’s creepiest mansion’. 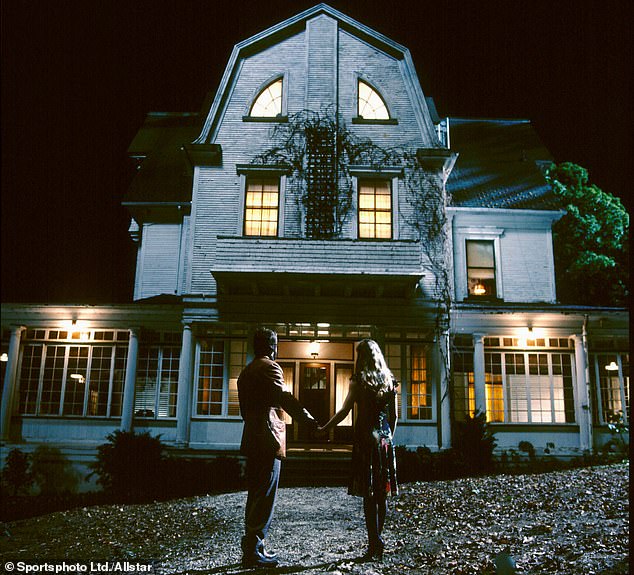 The book was adapted into the 1979 horror film of the same name starring James Brolin, Rod Steiger and Margot Kidder, and gained international notoriety

Tales of angry spirits trapped inside the clapboard house quickly circulated among local people after the murders, ensuring it remained empty for more than a year before a young couple, George and Kathy Lutz, bought it for a song. They moved in with their three young children and a dog in December 1975.

The pair, both 32, had heard about the fate of the DeFeos but, given the $80,000 (£40,000) bargain price of the waterfront property, which came with its own large boathouse and heated swimming pool, they were not going to let a family massacre and talk of ghosts put them off.

The house — which had a statue of St Joseph holding a baby Jesus on the front lawn — was named High Hopes, although Deep Despair would have been nearer the mark. The Lutzes stayed there for just 28 days before apparently fleeing in abject terror, taking little more than the clothes they were wearing.

According to them, they had not even unpacked their belongings before a plague of flies appeared, which was hardly usual for December.

They encountered strange cold spots in certain rooms and hallways, odd smells of perfume or excrement and jolting sounds that would disturb the family at night.

George Lutz apparently became increasingly volatile and kept waking up at 3.15am, the approximate time that DeFeo shot his family. And they all started sleeping face down — just as the DeFeos had been found.

Other developments were even more frightening: walls, stairs and keyholes oozed with green slime; objects suddenly flew across the room; mysterious forces ripped off a garage door and smashed windows; and a crucifix turned upside down on the wall and could not be put straight. Down in the basement, George found a hidden, red-painted room, which their labrador-cross, Harry, refused to go anywhere near.

One night, George said he had once seen the glowing eyes of some demonic, pig-like creature at a window. A terrible face appeared burned into a fireplace wall.

The couple’s young daughter, Missy, began speaking to an imaginary, perhaps demonic, entity named Jodie, and George’s wife Kathy claimed to have levitated above her bed, awakening from the disturbance with welts on her chest. Suddenly, $80,000 didn’t seem such a bargain.

The Lutzes weren’t the only ones to encounter this unholy phenomenon. A friend persuaded them to ask a local priest to bless the house. When he arrived, he distinctly remembered hearing a voice ordering him to ‘Get out!’ and something slapping him in the face.

It was a nightmarish tale that had everything Hollywood could wish for, and it is little surprise that it has since spawned 29 films, including a 2005 remake starring Ryan Reynolds and Melissa George.

However, even before the first movie came out, the wheels were coming off the Lutz ghost train.

For William Weber, Ronald DeFeo’s lawyer at his murder trial, said he had dreamt up the demonic story with the Lutzes ‘over many bottles of wine’, and they had later regaled their concoction to writer Jay Anson for the Amityville Horror book.

William, who admitted he had fallen out with the couple over money, said he had passed them detailed information about the DeFeo murders — and that they had spun them into their ‘hoax’ story.

‘I told George Lutz that Ronnie DeFeo used to call the neighbour’s cat a pig,’ he said. ‘George was a con artist; he improvised on that and in the book he sees a demon pig through a window.’

The Lutzes stuck largely to their story and passed a lie detector test. The expert who conducted it said they had appeared genuinely terrified. They conceded parts of the horror story had been exaggerated but blamed most of this on the retelling in the book and original film.

The tiny red room in the basement — a sort of gateway to hell and source of the evil — that George found behind shelves, for example, hadn’t been a secret. The house’s previous occupants said they had used it for storage.

The lavatories hadn’t overflowed with hellish black sludge, as they had in the film, the Lutzes recalled.

There was also confusion about the identity of the priest who had blessed the house. The man widely assumed to have been him insisted he had never visited the property. 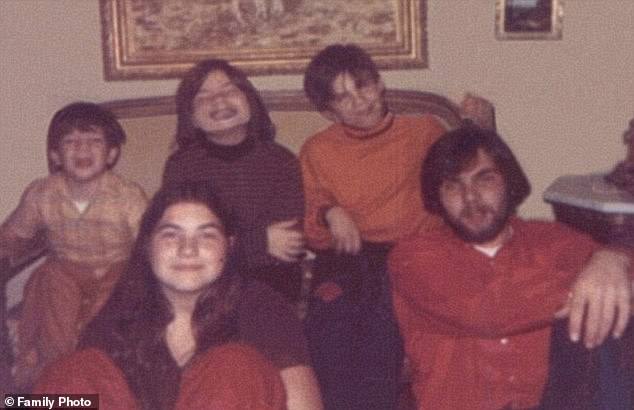 Ronald DeFeo died aged 69 in custody last Friday, all but forgotten by the outside world. But the house in which he slaughtered his family survives — and it remains a macabre testament not just to mass murder but to bone-chilling stories of evil and the paranormal. Ronald DeFeo is pictured with his siblings whom he killed

The Lutzes sued William for invasion of privacy, with George saying: ‘We’re tired of being called liars.’ The lawyer then countersued them for fraud and breach of contract.

The judge said it appeared to him that the Amityville Horror novel was a ‘work of fiction’. He threw out the Lutzes’ case while William’s claim was settled out of court — he had demanded $60 million (£30 million) but agreed to accept just $2,500 (£1,250).

Others continued to pick holes in the Lutzes’ account. They questioned why the couple had failed to gather any evidence of the paranormal happenings — not even a drop of that gelatinous green slime, for example.

Local police wondered why they never reported the damage to their house, while the Amityville Historical Society contradicted George’s claim that it told him the house had been built on a cursed Native American burial ground.

Even so, it appeared they weren’t completely wrong about the house being odd.

The police confirmed that there had been reports of awful smells and an infestation of flies in the house that dated back to when the DeFeos lived there.

The Lutzes moved to San Diego and later divorced. Kathy died in 2004 and her ex-husband two years later, both from natural causes.

Events were further complicated when Ronald DeFeo changed his story in a newspaper interview from prison. ‘People look in my eyes, that I’m possessed or something,’ he complained. ‘I’m sick of it.’

He sensationally tried to overturn his conviction in court, claiming his lawyer, William Weber, had insisted he claim insanity at his trial to make the story more attractive for possible book and film deals.

‘The whole thing was a con,’ DeFeo said, ‘except for the crime.’

He claimed the lawyer had assured him that ‘he would have me out in a couple of years and I would come into all that money’.

He added: ‘He said it would be The Godfather and . . . The Exorcist all in one. I said, “I got enough problems already.” ’

The lawyer told the court that the Lutzes had been interested in ‘developing the demonism aspect of the case’. Providing more insight into the couple’s supposed creative powers, he said he’d told them that Ronald DeFeo Sr had once hit his wife as she was carrying a plate of spaghetti, sending her tumbling down the basement stairs.

The tomato sauce splashed the walls and in The Amityville Horror became the green slime that seeped out of the walls.

The lawyer admitted he had quickly realised that the sensational murders would make a great film or book, but insisted that it had never influenced his defence of DeFeo.

Here the bizarre tale might have ended were it not for a final chapter. In 2013, the Lutzes’ son Daniel — who was ten when they lived in the house — insisted he really was menaced by spirits there and that their time there had ruined his life.

Daniel, who left home at 15 and later experienced periods of homelessness, blamed his stepfather George, whom he claimed had dabbled in the occult and opened a gateway to dark forces.

‘George’s beliefs and practices triggered what was going on in the house,’ he told a documentary. ‘It was like a magic trick gone bad that you couldn’t shut off.’

Although few people now believe the Lutzes really were the victims of the sustained demonic attack they claimed, Daniel’s assertions suggested an alternative explanation. If George already believed in the occult, he would have been more likely to convince himself that whatever happened inside the house was supernatural.

What is undeniable is that if there was ever something dark in the house, it left with them. It no longer has its sinister-looking quarter-moon windows and its street number has been changed to deter gawkers. And while it may remain competitively priced, no subsequent occupants have run screaming from it with tales of green ooze and devil pigs.