Follow April rumors of infidelity and uncertainty in the relationship, Khloé Kardashian and Tristan Thompson have broken up again, Page Six reported on June 21. Friends of the former couple shared the exclusive news that the pair have been separated for weeks now.

Co-parents to 3-year-old daughter True, the pair split up once before in April 2018. When Khloé was pregnant with True, the Daily Mail posted a video allegedly showing Tristan canoodling with a woman at a New York City bar. Around this time, TMZ also shared footage, shot in October 2017, supposedly showing Tristan getting handsy with two women at a hookah lounge. The two briefly called it quits, reconciling May 2018 after True’s birth, according to Cosmopolitan. TMZ, however, reported further cheating rumors — this time of Thompson “snuggling” with Kylie Jenner’s former friend, Jordyn Woods, at a party in February 2019. They split again, with the two eventually getting back together in summer 2020, per Insider.

As Page Six pointed out, this latest breakup came after Tristan supposedly got spotted alone in a room with three women at a birthday party on June 18. Per the outlet, he allegedly left the room 30 minutes later with a “disheveled” appearance. Could this be what drove the couple to split this time? Keep reading to find out!

The straw that broke Khloe Kardashian and Tristan up 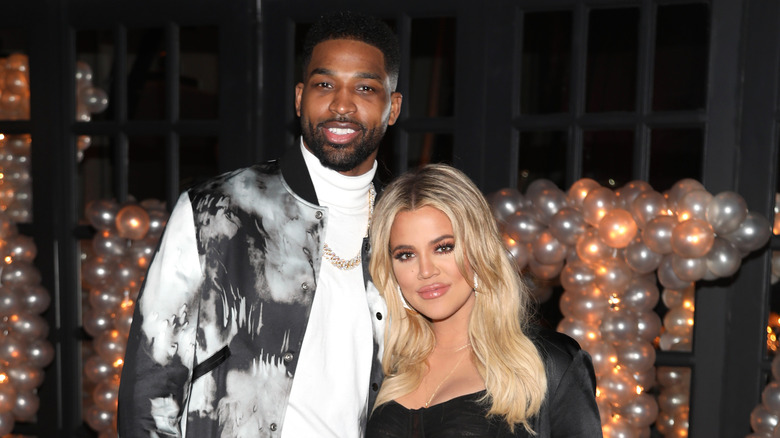 Per Page Six sources, Khloé Kardashian and Tristan Thompson are “off” again due to the April cheating scandal that ignited when Instagram model Sydney Chase’s appearance on the “No Jumper” podcast. In the interview, Chase was asked the question, “How was Tristan Thompson’s d**k?” She replied, “It was a peek-a-boo d**k but baby it was good.” According to Chase, this supposed dalliance occurred in January 2021 (when Khloé and Tristian were fully together), but she claimed the NBA player had told her he was single. “I cut him off,” she told the show about what she did after finding out.

In a reunion episode of “Keeping Up with the Kardashians” on June 20 that was recorded in April, Khloé described her feelings on moving forward with Thompson despite worries the infidelity might start again. “I can’t worry too much about everything else. I know the growth and all the work that he’s done,” she said (via Hollywood Life).

According to Page Six’s sources, there are no hard feelings at the moment for the ex-couple. “They’re getting along. There is no drama,” the insider spilled, stressing that “everything is amicable, and they are on the same page with co-parenting.”