She captioned the photo: “one has to go.”

Pratt, 41, began trending on social media after many named him the worst Chris in Hollywood. 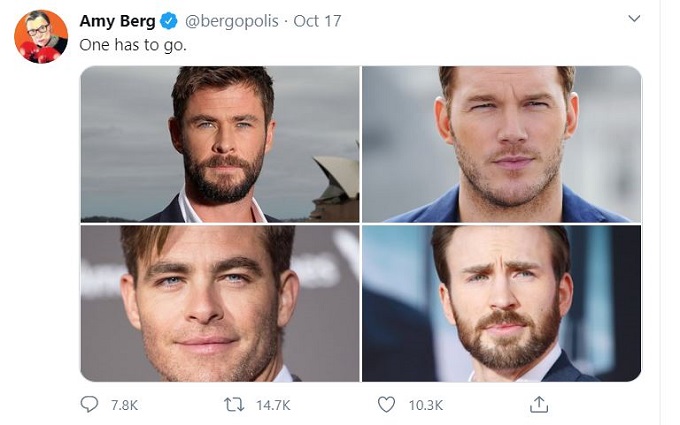 Katherine Schwarzenegger quickly came to her husband’s defense after his name began trending on social media as the Hollywood Chris that has to go.

Schwarzenegger first came to her husband’s defense after E! News posed the same question to their 15.6 million Instagram followers.

“It’s an age-old debate: Which Hollywood Chris is the best? Marvel, weigh in, and see which actor the internet is giving the boot to at the link in our bio,” the E! News Instagram post read. 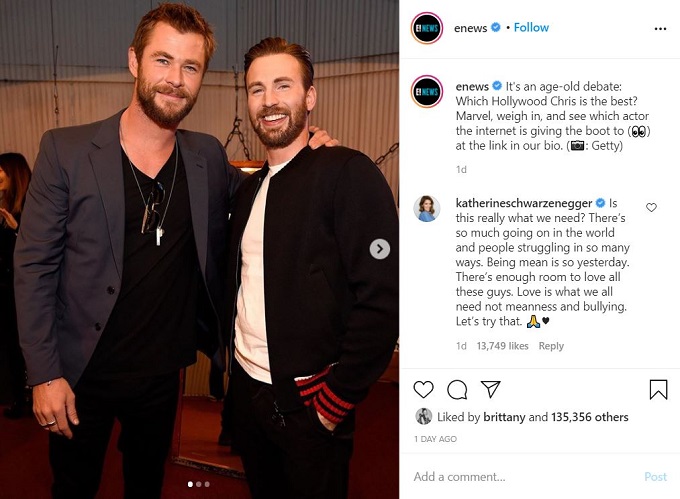 Schwarzenegger responded to the post by asking whether that sort of challenge was what people need at a time when “so much going on in the world and people are struggling in so many ways.”

“Being mean is so yesterday,” she added. “There’s enough room to love all these guys.”

Downey Jr. described Pratt as “A real #Christian who lives by #principle, has never demonstrated anything but #positivity and #gratitude…”

Ruffalo also defended his co-star, saying,”[Pratt] is as solid a man there is. I know him personally, and instead of casting aspersions, look at how he lives his life.” 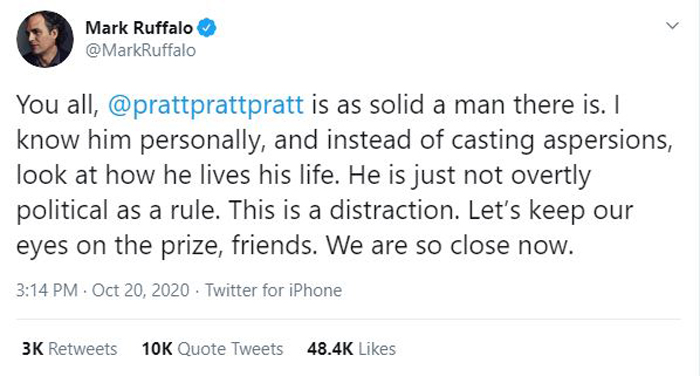 Who is Katherine Schwarzenegger?

Her younger siblings are Patrick, Christina, and Christopher, and Joseph Baena (half-brother).

She is also the author of Rock What You’ve Got: Secrets to Loving Your Inner And Outer Beauty From Someone Who’s Been There And Back (2010).

Katherine married Chris Pratt in Montecito, California, in June 2019, after The Guardians Of The Galaxy star split from his wife, Anna Faris, in 2018.

They welcomed their first child, Lyla Marie, in August 2020.

Katherine Schwarzenegger and Chris Pratt are known to be devout Christians, and she often references her faith in her social media posts.

You can find Katherine here on Instagram, where she has more than 925,000 followers.

She describes herself on her Instagram profile page as an “‪Author, Animal Lover & Advocate. Ambassador for Best Friends Animal Society & ASPCA.”