Home » Celebrities » Wiz Khalifa Tries To Make Peace With Cardi B After Fans Accuse Him Of Shading Her: I Don’t Want A ‘War’

Wiz Khalifa Tries To Make Peace With Cardi B After Fans Accuse Him Of Shading Her: I Don’t Want A ‘War’

Cardi B was hurt after Wiz Khalifa responded to criticism about the ‘WAP’ rapper winning a Grammy, while Nicki Minaj hasn’t. Wiz is now trying to clarify what he meant!

Wiz Khalifa, 33, is trying to do damage control after unintentionally starting a tweet “war” with Cardi B. It all started when the Grammy Awards released its nominees list on Nov. 24, leading some artists — like The Weeknd and Nicki Minaj — to call out the award show for snubbing them, either this year or in the past. So, Wiz tweeted that “as a grammy nominated artist” he “know[s] how it feels,” and added that people “always think its unfair until they get their turn” and to “just keep workin and that time’ll come through.”

One fan rebutted Wiz’s outlook on how the Grammy Awards operates by pointing out Cardi’s win for “Best Rap Album” in 2019, while Nicki — one of the most decorated female rappers of all time — has yet to secure a Grammy. “Cardi wining a Grammy when nicki minaj didn’t is the biggest proof that they don’t know a s–t bout music,” the fan wrote. Wiz replied by saying “Most self made artists have this problem,” which didn’t sit well with Cardi. 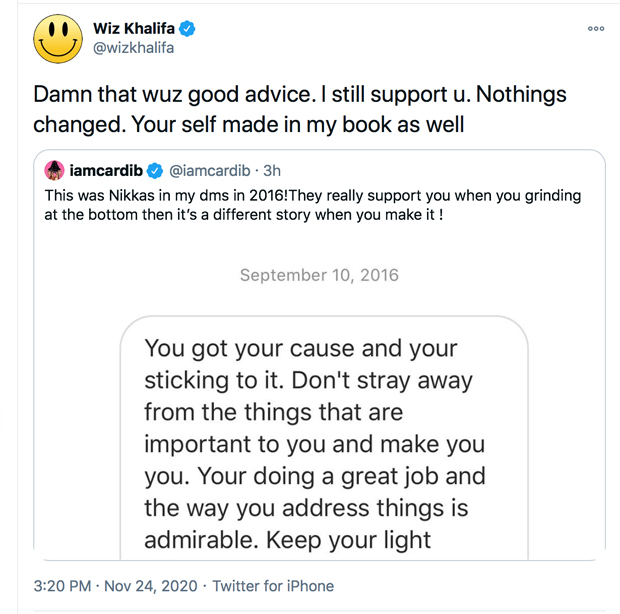 To clap back, Cardi resurfaced a 2016 DM from Wiz, who had offered her advice and support while she was still on the rise. “They really support you when you grinding at the bottom then it’s a different story when you make it !,” Cardi tweeted. The DM in question was a kind note from Wiz, which read, “You got your cause and and your [sic] sticking to it. Don’t stray away from the things that are important to you and make you you. Your [sic] doing a great job and the way you address things is admirable. Keep your light shining and don’t let others take it. Peace and love.” Cardi later tweeted that she’s “the scapegoat,” as people continue to criticize her Grammys win and compare her to Nicki, her former rival. 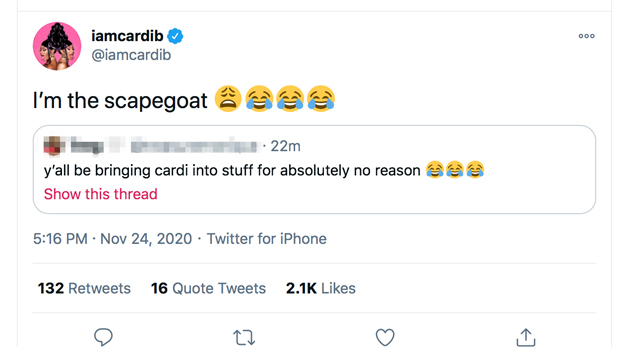 Many fans sided with Cardi, seeing Wiz’s tweet as shade towards the “WAP” rapper — which he tried to prove was anything but. “Damn that wuz good advice. I still support u. Nothings changed. Your [sic] self made in my book as well,” the “Rolling Papers” rapper responded. He also wrote that it would be “dope” to collaborate on a song with Cardi, per one fan’s suggestion.

Wiz’s tweets to Cardi confused one fan, who wrote, “Nowwww you wanna switch up after you JUST said that she wasn’t self made?? First they love you then they switch…” Wiz responded by writing that he “never said that,” and that “they both work very hard.” And on a final note, — to further stress he didn’t mean to rub Cardi the wrong way — Wiz tweeted this: “I just don’t want a Cardi/ Wiz war goin on for no reason.”

Before Wiz and Cardi’s tweet feud, Nicki voiced her own disappointment on Twitter as many fans called out what they saw as snubs in the 2021 Grammy Awards nominations list. “Never forget the Grammys didn’t give me my best new artist award when I had 7 songs simultaneously charting on billboard & bigger first week than any female rapper in the last decade- went on to inspire a generation. They gave it to the white man Bon Iver,” she posted on Tuesday.