The coronavirus recession is over, if you ask the billionaires of the world. According to a report released Monday by Oxfam, the top 1,000 billionaires collectively lost about 30% of their wealth when COVID-19 restrictions stalled global economies in March. By the end of November, they’d made it all back.

For the world’s richest, it took less than 10 months to recover the financial losses caused by the pandemic. For the world’s poorest, the report estimated, it will take more than 10 years.

“While a wealthy minority have amassed vast fortunes before and during the pandemic, the majority of the world’s population have been struggling to survive on poverty wages and without access to decent health care or education,” Paul O’Brien, vice president of Oxfam America, told HuffPost. “Today’s levels of extreme wealth concentration are not sustainable. Billionaires are a sign of economic sickness, not health. They are the symptom of a broken economy.”

The pandemic threatens to undo the progress of more than two decades of declining global poverty. The World Bank has estimated that more than 200 million people may sink into poverty as a result of COVID-19’s economic effects — in low-income countries and in rich ones, including the United States. Startlingly, the Oxfam report found that the cost to prevent people from falling into a life lived on less than $5.50 a day would be far less than the profits made by the world’s wealthiest during the coronavirus crisis.

According to Oxfam’s calculation — based on poverty data from the World Bank and wealth data from Credit Suisse and the Forbes Billionaires list — the world’s 10 richest people, including Amazon CEO Jeff Bezos and Tesla founder Elon Musk, added $540 billion to their collective net worth in the last three quarters of 2020. If they handed over around $80 billion, they could keep those imperiled millions above the poverty line for a year while economies rebuild.

With the remainder of their 2020 profits, these 10 billionaires could pay for both rounds of the COVID-19 vaccine for every person on Earth and still come out ahead. (Oxfam used World Health Organization data to estimate a cost of around $9 per dose, a total expenditure of $141.2 billion for the world’s 7.8 billion inhabitants.)

Oxfam timed the release of the report to coincide with the start of the annual World Economic Forum’s Davos meeting (virtual this year), where industry and government leaders “convene to address critical issues.”

The report paints a stark portrait of the divide between CEOs at the top and laborers at the bottom, many of whom have continued to work in dangerous circumstances, without the option to stay home to avoid the virus.

Raj Sisodia, a business professor at Babson College and co-founder of the Conscious Capitalism movement, likened standard corporate structure to India’s caste system. At the top: generously paid professional, college-educated people with benefits and stock options, supported by the “chew them up and spit them out workforce” — people locked into low-paying hourly jobs, without health care, paid leave or retirement benefits.

“That needs to change,” Sisodia said. “There has to be a modest ratio between pay at the top and pay the bottom.”

That’s not currently the case. In the last 40 years, executive pay has increased by 1,000% while worker pay has budged less than 12%. 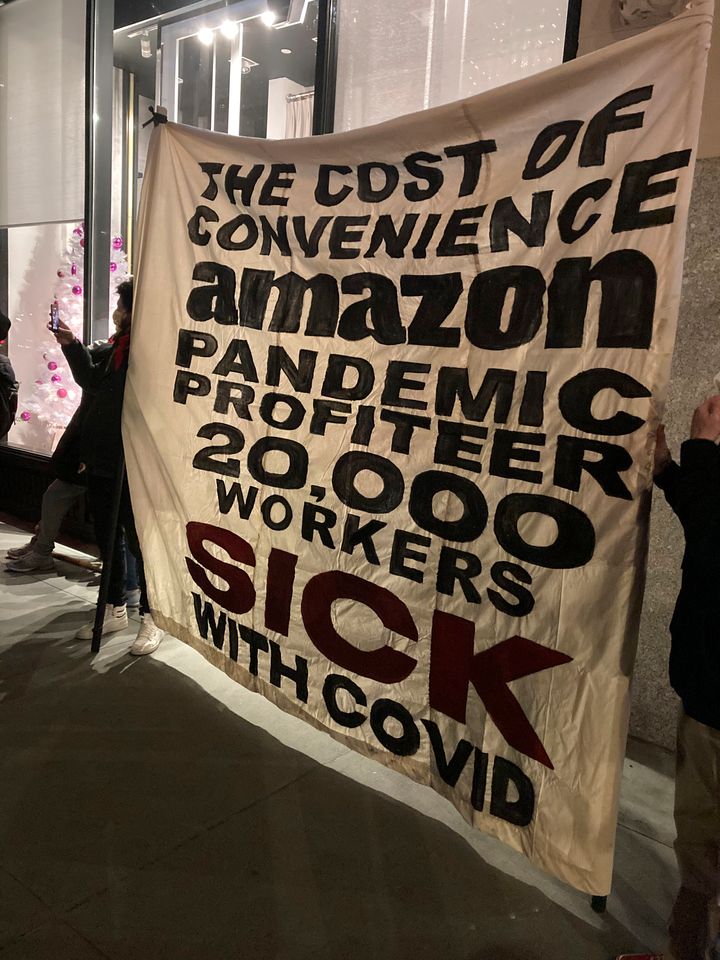 Amazon logged record sales as nearly 20,000 Amazon workers contracted COVID-19 between March and September of 2020. With the wealth he accumulated over the same period, the Oxfam report found that “Jeff Bezos could have personally paid each of Amazon’s 876,000 employees a one-off $105,000 bonus … and still be as wealthy as he was at the beginning of the pandemic.”

But handouts won’t bring about the fundamental restructuring that is needed, said O’Brien: “Asking the wealthy to be charitable is no substitute for taxing them and the companies whose profits have soared in past years.”

“The super-rich use a network of tax havens to avoid paying their fair share of tax and an army of wealth managers to secure sky-high returns that are not available to an ordinary investor,” he continued. “Big corporations are dodging taxes, driving down wages for their workers and the prices paid to producers, and investing less in their business in order to maximize returns to their wealthy shareholders. Both big business and the super-rich use their money and connections to ensure government policy works for them. This has to stop.”

The report’s other policy recommendations include investing in social services and guaranteed income, moving away from using gross domestic product as a metric for economic growth, and making fighting inequality central to pandemic recovery.

“The most effective way of getting people back on their feet in the wake of this pandemic is to build fairer, more sustainable economies that work for everyone and not just a fortunate few,” said O’Brien. “The Davos set, including corporate executives, must join efforts to make this a reality.”

HuffPost’s “Work In Progress” series focuses on the impact of business on society and the environment and is funded by Porticus. It is part of the “This New World” series. All content is editorially independent, with no influence or input from Porticus. If you have an idea or tip for the editorial series, send an email to [email protected].