13 easy ways to stay cool while WFH in a heatwave

No office air-conditioning? No problem…

Updated on 6 August: it’s hot, isn’t it? And it’s only about to get hotter: indeed, while we’re loathed to use the word “heatwave” just yet, it’s worth noting that forecasters at the Met Office have promised blue skies and sunshine for the rest of the week.

Writing on the official Met Office website, chief meteorologist Dan Suri said: “Most of us will see a spell of warm, summery weather later this week, with hot weather developing across southern parts of the UK. From Thursday temperatures will be in the low- to mid-20s Celsius for Northern Ireland, Scotland, and North Wales and it’ll be much warmer across southern and central areas, with temperatures widely reaching 28-29 Celsius.

“It’ll be another hot day on Friday with temperatures widely reaching 30 Celsius, or higher, in central, southern and some northern parts of England. It is likely to be hotter still in southeast England where 34 to 37 Celsius is possible. Saturday will likely be another hot day for southern and central parts of the UK, with heatwave conditions possibly being met in parts of southeast England and East Anglia.”

Deputy chief meteorologist, David Oliver added: “Through the weekend there will be plenty of dry and sunny weather for most. The high temperatures could trigger some thunderstorms across parts of the UK by the beginning of next week, at the moment there is some uncertainty around the detail of any thundery showers so stay up to date with the latest Met Office forecast.”

Of course, this is all well and good, save for the fact that many of us are working from home at the moment (first world problems during a nationwide lockdown, we know). And, for the first time in forever, we’re actually missing the icy chill of our air-conditioned offices.

As reported on 1 June: with that in mind, then, here are 13 hot weather hacks which should help to keep you cool while you’re WFH this summer. You’re welcome.

Shut out the sun

It may seem counterintuitive, but keeping the curtains closed during the day will stop the sun from warming up your workspace and turning it into an unpleasantly sticky greenhouse.

To make life even easier, check out our selection of the best leggings with pockets here.

Take your socks off

The human body uses extremities, such as your hands and feet, to regulate your core temperature. This means that, when it’s hot outside, it will use your hands and feet to get rid of excess heat and keep itself from ‘overheating’… but it does mean your feet will get hot fast. Taking off your shoes and socks, then, is a surefire (albeit temporary) route to sheer bliss.

Just as you would in the winter, try using a hot water bottle. Freeze it, though, rather than fill it with boiling water, and sit with it against your feet. Why? Well, your feet and ankles are particularly sensitive to heat, as they have lots of pulse points: popping something cool against them will initiate a cool-down effect over your entire body. 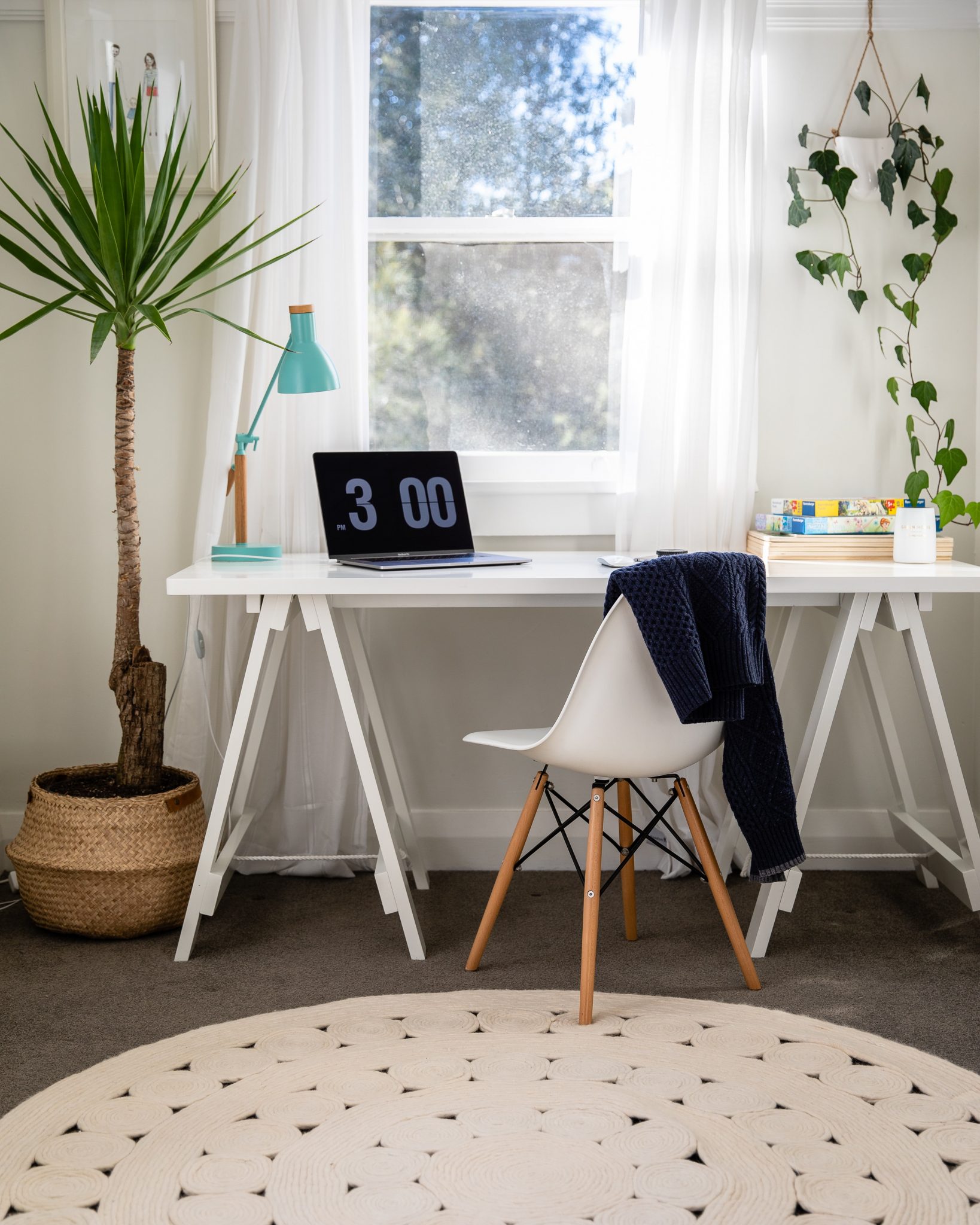 Build your own DIY aircon

Put a glass of ice water (or a bottle of water that you’ve frozen) in front of a fan, and then switch it on. It will create a cool breeze, recreating the icy chill of that air-conditioned office we’ve all come to know and love over the years.

Open the windows after sundown

Opening the windows later in the evening, when the air is cooler, will help to cool the air in your workspace ready for the next day. Then it’s just a matter of resistance: try not to open your windows during the day, as it could let all your cool air out (and all that hot air in).

Your morning coffee can raise your body temperature, which isn’t great if you already feel hot. Swap it for a glass of water instead or, if you prefer your beverages on the hot-side, check out our article on the hot drink that cools you down.

You should be drinking around six to eight glasses of water a day at the best of times. When it’s hot outside and you’re sweating more than normal, though, you may need to sip just a little bit more. Remember, if you’re feeling thirsty then you’re already starting to dehydrate, so take regular sips of water to stop this happening.

To find out more about how to drink water during a workout (because, yes, there is a right way of doing it), be sure to check out our article here.

Get strategic with your ice packs and press them against the pulse point on your wrist, neck, chest, or temples – aka the spots that release the most heat from the body, and where the veins flow closest to the surface of the skin. This will expedite the cooling-down sensation you’re looking for. Just remember to cover your skin with a towel to protect it, and keep contact limited to 20 minutes at a time.

Note: you can run your wrists under the cold tap for the same effect!

A cold flannel against your neck is a clever way to target the part of the brain that senses and regulates body temperature. Fold a flannel in half, douse it in water, and press it against the back of your neck for a wee while. You’ll feel better in no time.

Sit at the table

Sitting with a hot laptop on your knees is a surefire route to hot weather misery. Instead, pop yours on the table (or any hard surface) and work that way. Less convenient, sure, but on the plus side it’ll be better for your posture.

Even something as small as a smartphone charger can generate unwanted heat, which increases the room temperature, and can make you feel even hotter. Unplug the electronics you’re not using (including lamps) if you want to cool things down.

And finally… change your working hours (if possible)

If you’re working from home at the moment, consider asking your boss if you can adjust your hours. Start earlier (say 6am) to maximise productivity before the sun hits its highest point in the sky. If you aren’t an early bird, then consider taking a leaf out of Spain’s book and adopt a ‘siesta’, aka a short nap taken in the early afternoon, to avoid the glaze of the midday sun, and working a little later to make up the time lost.

This article was originally published on 28 May 2020, but has been updated throughout.