2015 Ashes Watchalong: how England grabbed 2-1 lead over Australia ahead of fourth Test 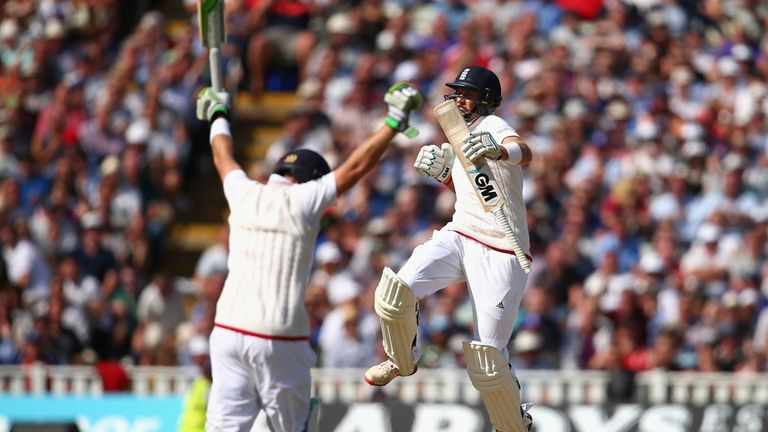 England arrived at Trent Bridge for the fourth Ashes Test of 2015 in buoyant fashion after rallying from defeat in the first match of the series to power into a 2-1 lead.

The Ashes were within grabbing distance with two games to play – but few, if any, predicted the explosive events that would unfold over three enthralling days in Nottingham.

This weekend, you can watch every ball of the Trent Bridge clash again. Our build-up starts at 10am on Saturday, on Sky Sports Cricket and Main Event, with the watchalong getting underway at 11am (on Sky Sports Cricket and our Youtube channel) when England’s Stuart Broad will be among our special guests. Day two and day three coverage begins at 10am on both Sunday and Monday.

At 43-3 on the first morning of the series, England appeared to be reliving their nightmare of 2013/14 only for Joe Root – dropped for that final Ashes Test in Sydney and put down here on nought by Brad Haddin – to hit back hard with a classy first-innings 134, supported by a gritty fifty from Gary Ballance and flourishing ones from Ben Stokes and Moeen Ali.

Chris Rogers struck the only half-century of Australia’s reply before becoming Mark Wood’s first Ashes wicket, falling for 95, England then building on their first-innings lead of 122 despite more top-order trouble.

Chasing 412 for an improbable win, Australia subsided from 97-1 to 106-5 after Moeen Ali (3-59) trapped David Warner lbw on the stroke of lunch. Root collected the scalps of Mitchell Starc and Mitchell Johnson (77) before holding the winning catch at long off and claiming the man-of-the-match award.

What they said – Nasser Hussain: “It’s very rare that you start an Ashes series with a perfect performance. Bearing in mind they’ve come in off the back of a 5-0 defeat in Australia, England were absolutely outstanding from the first ball.”

England’s euphoria was short-lived as Chris Rogers (173) – dropped before he had scored by Root at slip – and Steve Smith (215) ran amok at HQ to post 337-1 on day one. With Brad Haddin absent for personal reasons, not to return for the rest of the series, debutant Peter Nevill contributed 45 and then snared his first victim second ball as Adam Lyth edged behind to start a collapse that saw England slump to 30-4. Australia’s edge was blunted by an obdurate 145-run stand between Alastair Cook and Ben Stokes – but when the skipper dragged on to miss out on a 28th Test century, the tourists turned it up a notch.

When Michael Clarke declared just before lunch, setting England a victory target of 509, hopes of home resistance faded fast against Mitchell Johnson (3-27) – Stokes taking plenty of stick after being run out for nought, failing to ground his bat.

What they said – Nasser Hussain: “Australia have outplayed England – but how did they turn it around? Their box-office players – Steve Smith, Mitchell Johnson – put in stunning performances and it’s time for Bell – if he plays – to do the same.”

Michael Clarke resisted the chance to put England’s batting straight back under the microscope and James Anderson made him pay, demolishing Australia’s first innings with 6-47 after Steven Finn had removed Steve Smith and Clarke in his first Test for two years. Ian Bell, promoted to three after Gary Ballance was axed, contributed one of three precious fifties to keep Australia’s probing attack at bay and build a first-innings lead that took the tourists six second-innings wickets to erase. Finn finished with 5-45 after picking up Clarke and Adam Voges in successive deliveries – David Warner seemingly playing on a different pitch as he cracked 77 off 62 balls.

Nevill (59) and Starc (58) ensured Australia had something to bowl at but England got home at a canter as Bell posted his second half-century of the Test, with Root well on track to his as the tourists were despatched on the afternoon of day three.