Leslie Jones steps into nominated films and TV shows like “WandaVision” and “Bridgerton,” while presenter Addison Rae gets some Best Kiss action with her “He’s All That” co-star Tanner Buchanan.

The two-night transformation for the “2021 MTV Movie & TV Awards” kicked off with a celebration of the best in scripted entertainment led by Leslie Jones.

Appropriately, the night began with one of the most viral television shows in recent memory– and a big winner on the night — as Leslie took a deep dive into the world of Black sitcoms in a parody of the Marvel/Disney+ series “WandaVision.”

Whereas the original saw Marvel’s Wanda Maximoff create a world based on her favorite sitcoms, Leslie explored some of her own classic Black favorites including “The Jeffersons,” “Good Times” and “Family Matters.”

For the latter, she took on the iconic role of Steve Urkel, which perfectly set her up to response to the claims that she had altered reality around her with his most famous line, “Did I do that?”

Later, she dropped in on “One Night in Miami,” “Godzilla vs. Kong” and demanded a “long-ass Snyder cut” of Rege-Jean Paul stripping down on “Bridgerton.”

Eric Andre Presents Drunk … Or Did He?

Presenting the award for Best Performance in a show (won by “WandaVision” star Elizabeth Olsen), comedian Eric Andre came out alongside “Vacation Friends” star Yvonne Orji, and let’s just say they were not matching one another in energy levels.

It was clear they were working off a script or a general concept, with Eric starting to sing and saying he was still competing to try and win the award himself. But things seemed to go a bit off-script after she joked that the voting was over.

Reaching for the envelope, which certainly appeared to catch Orji off guard, he said, “Who’s to say? Gimme that little envelope. I’ll change ‘em right now, change it to me. It’s my time to shine!”

After she rebuffed him again, he looked awkwardly at the camera and muttered, “Okay, okay. I have no idea what’s going on. I’m drunk.”

“We could tell,” Orji quickly countered. Was it all scripted or just incredibly well performed by Andre?

In the pause before the nominees began showing, he said, “I think that went okay.” But even that did little to clarify if this was a strangely aggressive scripted piece, or if Andre was perhaps really starting the celebration a little early.

There is always the risk of something going wrong during a Zoom meeting, and with Scarlett Johansson accepting her Generation Award from the comfort of her home, that risk was expanded tenfold because she’s married to a comedian.

Out of nowhere, though it was clearly planned based on the camera angles used, Johansson’s husband, and “Saturday Night Live” star Colin Jost, suddenly started pouring a bowl of green slime on her head.

“MTV, you got slimed!” he crowed excitedly, to which she quickly corrected him, “That’s Nickelodeon!” Well, they are sister networks, so it was pretty close.

The easy rapport the two share, with him trying to gingerly clean the slime off of her face and her snapping back at him, only heightened the hilarity of the moment.

Best Kisses for Everyone

Presents and winners alike gave the MTV fans what they always want. Presenters Addison Rae and her “He’s All That” co-star Tanner Buchanan spent the build-up to the presentation of the nominees teasing the audience.

They talked about how they understood that it was expected, or at least wanted, that they kiss before presenting the award, but they’d spent so long practicing and perfecting their craft that it would not only be too hot for TV, but it might change the rating of the show were they to do it.

When the film clip stopped rolling of the nominees, they were fully lip-locked. But the lovefest didn’t stop there as winners Chase Stokes and Madelyn Cline of “Outer Banks” couldn’t resist giving the fans what they wanted, either.

We have to admit, a quick kiss to stop a potentially overlong acceptance speech isn’t a terrible idea, as Cline used to stop Stokes when he joked he was starting to panic. It’s certainly less jarring than when the band starts playing louder and louder and louder.

Later, when winning the award for Best Fight with Kathryn Hahn, Elizabeth Olsen joked that maybe they should have won for Best Kiss, but they ultimately didn’t make it a trifecta for the fans.

While Best fight winners Kathryn Hahn and Elizabeth Olsen did not jump on board the Best Kiss train, they did show just how important stunt doubles and special effects are in making a  spectacle like their final battle on “WandaVision.”

It’s clear that both women had mastered their hand techniques for casting spells and blasting one another, but boy did it leave something to be desired when they were doing it without any post-production.

How long before some enterprising fan grabs this footage and adds in all that spectral coloration and sounds to complete the look and feel of this staged — see what we did there? — battle? 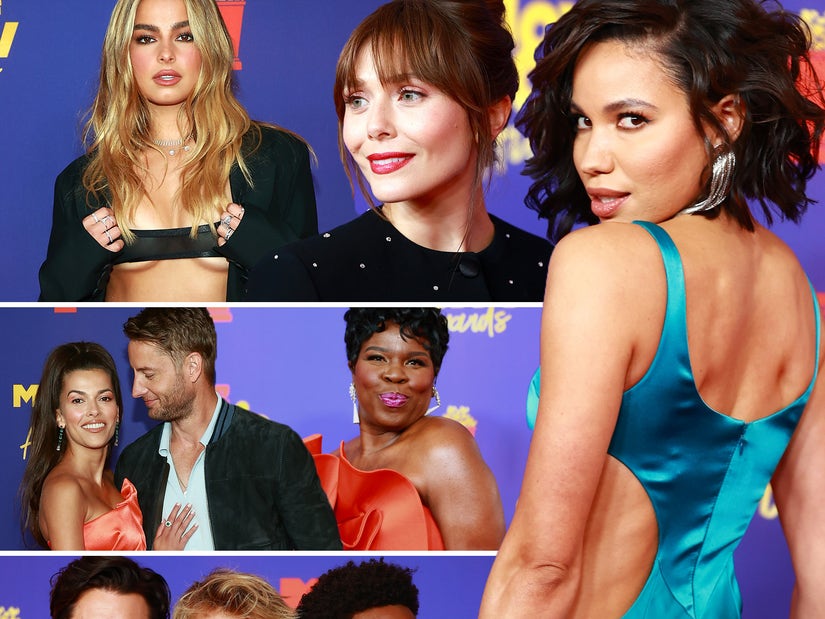