Home » Lifestyle » A ball at the hall! The Royal Albert Hall is celebrating 150 years

A ball at the hall! The Royal Albert Hall is celebrating 150 years

A ball at the hall! From circus spectacles to sumo wrestlers, the Royal Albert Hall’s seen them all in its 150 years – and Mick Jagger is leading the birthday celebrations…

Muhammad Ali and Jimi Hendrix, The Beatles and The Rolling Stones on the same bill (not to mention the world’s first bodybuilding contest with Sherlock Holmes creator Sir Arthur Conan Doyle among the judges!) – the Royal Albert Hall has hosted them all.

The venue marks its 150th birthday this month with a short film on YouTube narrated by Mick Jagger. Your Room Will Be Ready has clips of Bob Dylan, Adele, Led Zeppelin, Freddie Mercury – and the riot when the Stones played the hall in 1966.

Ever since it opened its doors in 1871 the hall has hosted a dizzying array of events. It staged the world’s first indoor marathon in 1909, with runners doing a staggering 524 laps of the auditorium; equally frenetic was the night Fred Astaire judged a Charleston contest in 1926. 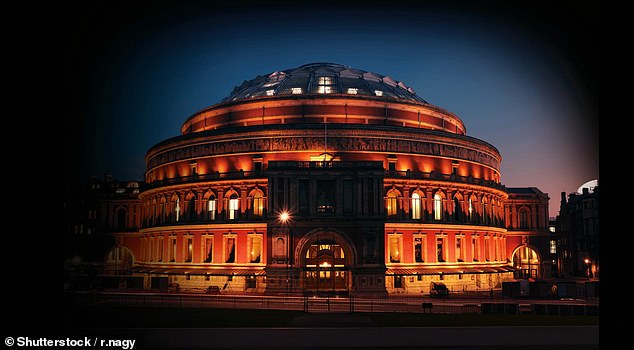 It ran from 9pm to 5am, with prizes including a trip to Paris and a case of whisky. All this of course on top of the venue being the home to the Proms classical music season since 1941.

The hall was Prince Albert’s idea, and a decade after his death, Queen Victoria declared it open with her son Bertie, the future Edward VII, on 29 March 1871.

‘Immense and very loyal crowds out’, she wrote in her diary. ‘We walked up the centre of the intensely crowded hall (8,000 people were there), which made me feel quite giddy… I had never been at such a big function since beloved Albert’s time.’

The crowds have been immense ever since, except for this past year, but guests – including Cliff Richard, Patti Smith and Michael Bolton – are booked again from July. The show must go on!

HOW IT ALL BEGAN 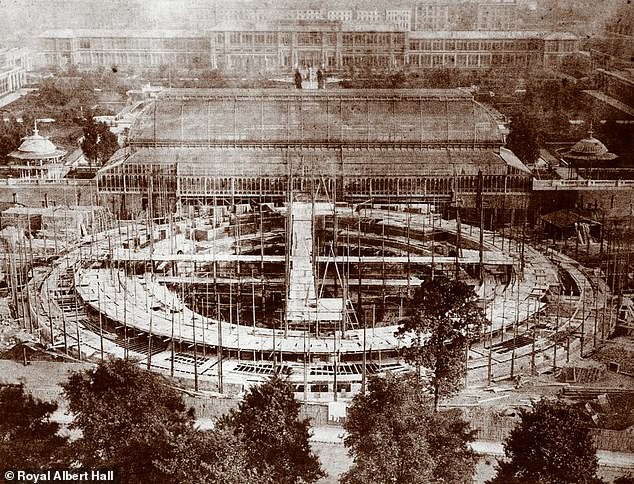 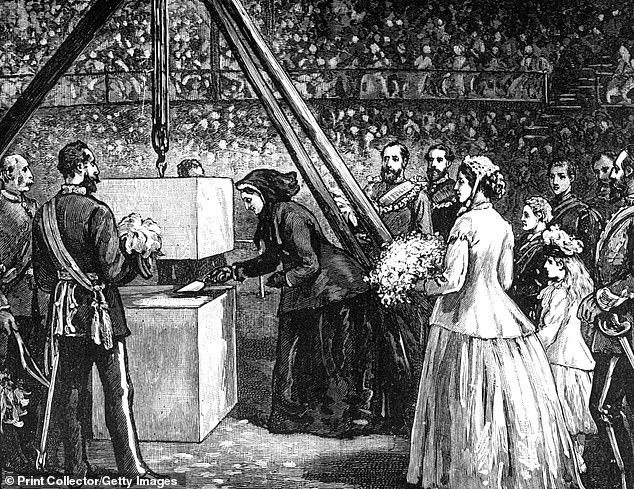 The venue first opened its doors back in 1871, after Queen Victoria lay the foundation stone on the hall during construction in 1867 (illustrated above)

Queen Victoria laid the foundation stone for the hall – named after her late husband Prince Albert – in 1867.

The roof was built near Manchester, taken apart and transported by train to London, then reassembled on top. 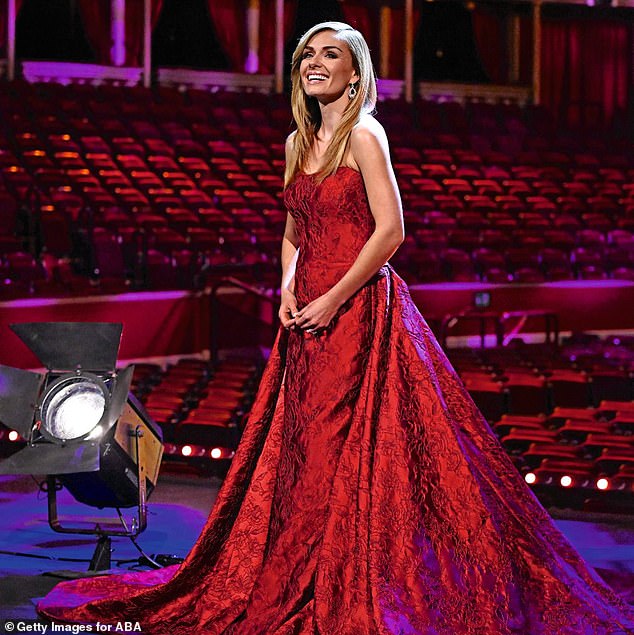 It has hosted a dizzying array of events since opening its doors, including Katherine Jenkins (above) performing at a concert commemorating 75 years since VE Day

Each November the hall stages the annual Festival of Remembrance attended by the Queen and members of the Royal Family, and last May Katherine Jenkins performed at an eerie behind-closed-doors concert commemorating 75 years since VE Day. 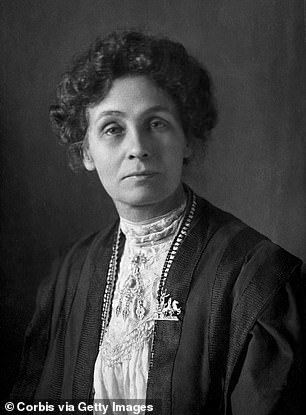 Emmeline Pankhurst and the suffragettes held 13 peaceful demonstrations in the hall before they were banned after growing more militant.

But in June 1914 they blocked sinks and left taps running in the ladies’ loos and caused a flood. Sadly it was behind the organ, which took six months to repair.

A PIECE OF PICASSO

In 1937 Picasso designed the programme, with a nod to his famous Guernica picture, for an event to raise money for Basque children who’d become refugees as a result of the Spanish Civil War. 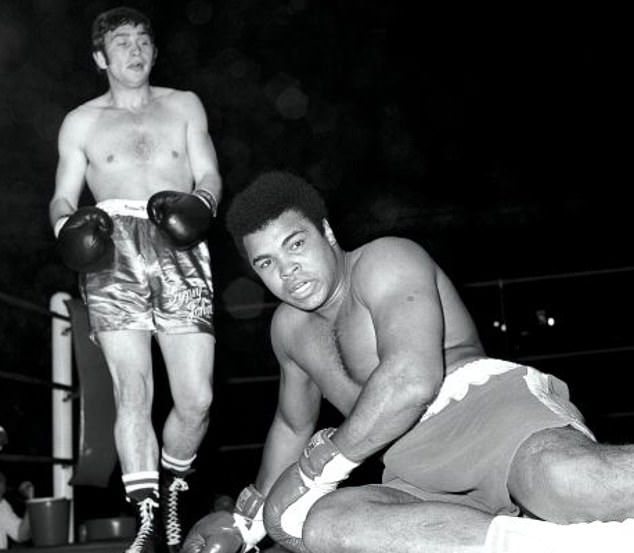 Boxing first took place at the venue in 1918, and Muhammad Ali took part in three exhibition bouts, including one in 1971 when he pretended to be knocked down on camera (pictured)

Boxing first took place at the hall in 1918. Muhammad Ali took part in three exhibition bouts, including one in 1971 when he pretended to be knocked down for the cameras.

Other fighters have included Henry Cooper and Lennox Lewis. Champions Tennis has hosted legends such as John McEnroe. ‘It’s unforgettable to play here,’ he said. 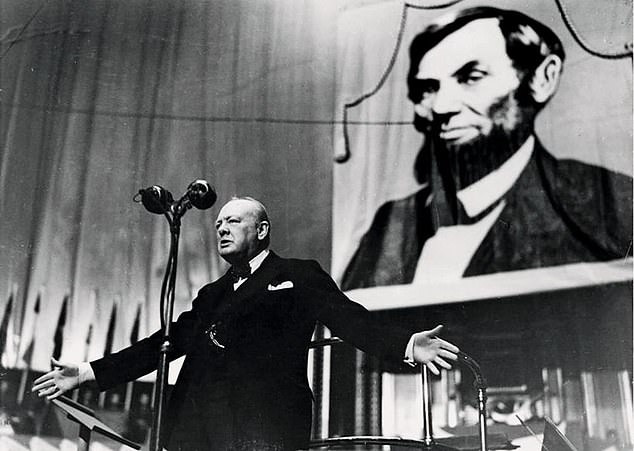 Winston Churchill had delivered a number of speeches at the hall but his most important was the one he gave in November 1944 at an event celebrating American Thanksgiving Day.

He spoke of Britain and America being ‘joined together, shedding our blood side by side, struggling for the same ideals’.

Jimi Hendrix played the hall in 1967 alongside Pink Floyd, and then again for two nights in 1969 – the final UK concerts by The Jimi Hendrix Experience. 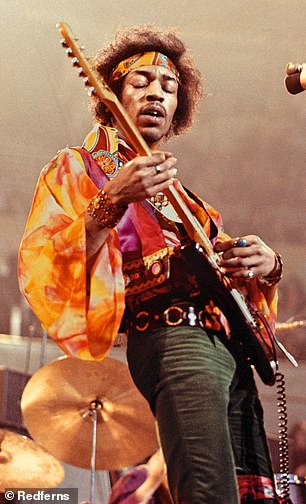 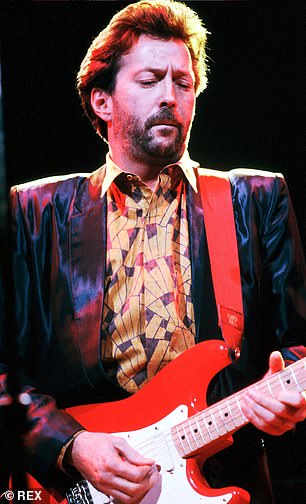 Jimi Hendrix (pictured) played the hall in 1967 alongside Pink Floyd, and then again for two nights in 1969 – the final UK concerts by The Jimi Hendrix Experience. Right, Eric Clapton is the most prolific living headliner, having appeared at the hall 212 times, 184 of those as the headline act, including a mammoth 24-night run back in 1991. Pictured in 1990

212 NOT OUT – ERIC’S ROYAL ALBERT RECORD

But Eric Clapton is the most prolific living headliner, having appeared at the hall 212 times, 184 of those as the headline act, including a mammoth 24-night run back in 1991.

He’s clear about why the Royal Albert Hall is so special to him.

‘It’s such an intimate place to play or to see someone else play, it’s like being in someone’s living room,’ he says.

‘The sound is so good whether you’re playing loud or quiet. I love playing there. I can also see everybody – it’s like being at a party where you’re the band.’

REINFORCED CHAIRS FOR THE JAPANESE WRESTLERS 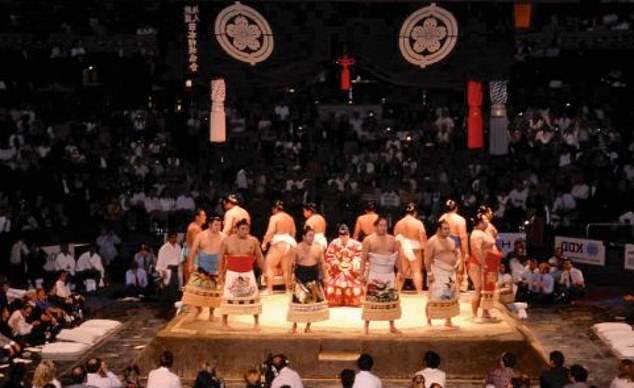 In 1991, the hall hosted the first sumo wrestling tournament (pictured) ever to take place outside Japan in the sport’s 1,500-year history, as part of the Japan Festival

In 1991 the hall was the venue for the first sumo wrestling tournament ever to take place outside Japan in the sport’s 1,500-year history, as part of the Japan Festival.

To accommodate giants like 37½st wrestler Konishiki (nicknamed the Dump Truck), extra-large showers had to be fitted backstage and chairs had to be reinforced. 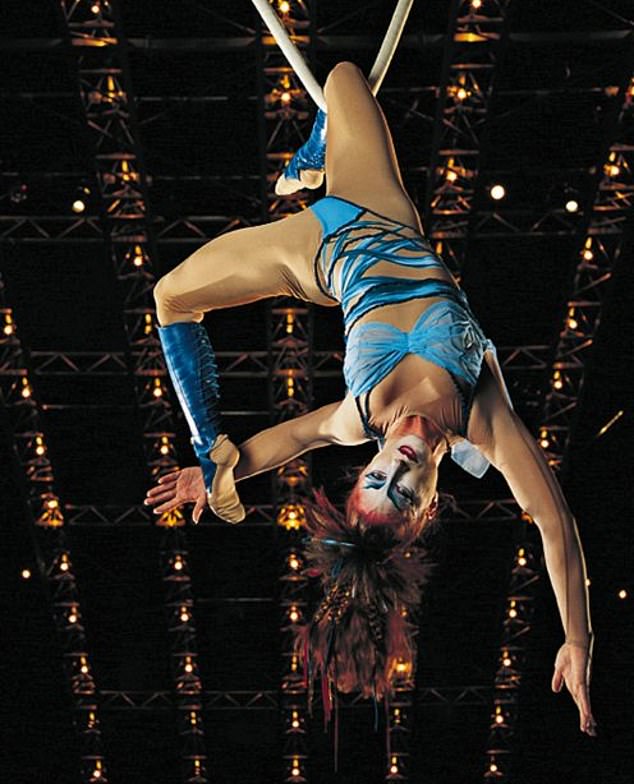 The Royal Albert Hall has hosted a huge variety of shows, with The Canadian circus company Cirque du Soleil first bringing their breathtaking displays in 1996 with the show Saltimbanco

The Canadian circus company Cirque du Soleil first brought their breathtaking displays to the hall in 1996 with their show Saltimbanco.

It went down so well they’ve returned almost every year since, with seven different spectaculars that have become a fixture in the weeks after Christmas.

Their most recent show Luzia ran from January to March 2020.