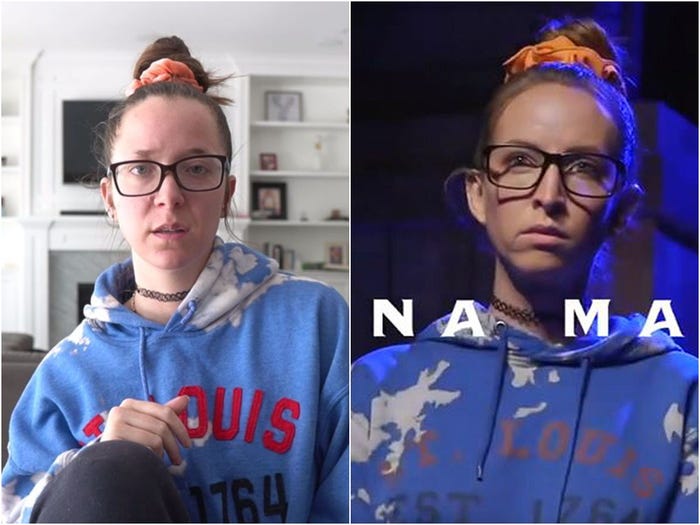 A month after YouTube announced that there would be no 2020 YouTube Rewind (its typically-annual year-in-review video), YouTuber Michelle Khare said on December 9 that she would make her own in the form of a musical.

When Khare tweeted that she would be posting a musical Rewind, there was an outpouring of support and anticipation.

However, the excitement was overshadowed once the full musical was posted on December 12 with backlash over the inclusion of a creator that left the platform this year — Jenna Marbles — due to controversy over her old content.

Jenna Marbles stepped away from the internet in June

Marbles, whose real name is Jenna Mourey, was played in the musical by actress and singer Julia Aks. For her musical number, Aks approaches the stage from behind a curtain, wearing the same outfit Mourey wore in her last YouTube video, right down to the style of glasses and orange scrunchie. She then reproduced several of Mourey's real lines from the video in song, before the lights go out.

Mourey posted her last video on YouTube on June 25, where she apologized for old, offensive content where she imitated Nicki Minaj, made a racist joke about Asian men, and "slut-shamed" women.

"It's awful, it doesn't need to exist, it's inexcusable, it's not okay," Mourey said in the now-deleted video.

She ended the video by saying she wasn't sure if she would ever return. Mourey and her partner Julien Solomita subsequently announced their joint podcast wouldn't be continuing either.

It was a tough video to watch for many of Mourey's fans who followed her journey on YouTube since 2010 to become one of the most popular creators ever. It prompted more conversations about cancel culture and accountability, with many concluding that of all the creators who have grappled with their old, offensive videos, Mourey had done so in an incredibly responsible way, getting ahead of criticism and taking responsibility proactively.

Largely, Mourey continues to be celebrated online for taking accountability.

Including Mourey in the musical didn't sit well with fans, who labeled the move disrespectful and thoughtless since she has been so clear about wanting to be offline for her own mental health.

"I just watched the youtube rewind musical thing and YUCK," tweeted YouTuber Adam McIntyre, who makes videos about internet drama. "What they did to and about Jenna was disgusting. Using her exact words making fun of it and having them sung did NOT sit well with me. Very bad move. Very bad bad bad move."

Even Mourey's partner seldom mentions her in his videos and streams. He saw the Rewind musical when someone texted it to him while he was livestreaming a game of Among Us on Twitch. He was visibly shaken near the end of the stream.

"Sorry guys I just, I think I should probably just get off stream," he told his viewers. "F—ing so dumb dude, so dumb. I just saw a clip from a YouTube Rewind thing. I'm just so sick of feeling like this, this whole year, and my life is just this big f—ing circus."

Solomita was clearly upset and tried to explain why the video was so hurtful through tears. He said it felt like his life was fair-game for people to make a joke out of, and it was "a lot to handle."

"The internet is like, it's just unbelievably relentlessly pathetic sometimes," he said. "And the person that I care about more than living my own existence is still being treated like that … I just don't get it. I just don't know at what point I will be able to exist."

'She didn't deserve any of that'

He said it was particularly difficult to watch because it had been made by fellow creators, who understand the burden of living their lives online.

"You're putting this thing out there that's such a joke, and it's at our expense. It's not harmless," he said.

Just before leaving the stream he said he shouldn't have watched it, and shouldn't speak on it further.

Michelle Khare apologized and removed the scene from the video

Khare issued a statement that she posted to Twitter and her YouTube community tab shortly after Solomita's stream. She said she thought it was important to her to accurately represent the events of the year "including the departure of one of the most beloved internet stars, Jenna Marbles."

She said the video was raising money for Black Lives Matter, and people of color she had spoken to thought it was "important to include and honor Jenna Marbles' honest, genuine, and moving apology that was followed by direct action."

"Rather than changing her words, or making them our own, we wanted to honor hers," the statement continued. "While this tribute we felt was powerful for many to watch, I see it has done more harm than good. I recognize fully that Jenna's wish to be off social media for the good of her mental health was counteracted by including her in the musical."

She said she had removed the scene from the musical as soon as she saw Solomita's stream.

"I sincerely apologize to Jenna, Julien, and the fans for causing more pain in a place we wanted to bring respect, in showcasing an apology that was profound, and most of all — began a conversation about accountability," she said.

"YouTube Rewind 2020: The Musical" is currently not available on Khare's channel.