It is hard to exaggerate the significance of the climate change statement issued by the United States and China on Sunday morning Australian time, despite the tepid diplomatic language in which it was framed.

Both countries committed to cooperating with each other on climate, which they agreed “must be addressed with the seriousness and urgency that it demands”. 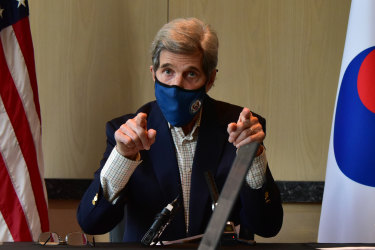 Their cooperation would include “enhancing respective actions” and cooperating in “multilateral processes” – which is to say they agreed to step up their domestic action and back more ambitious international cooperation via the Paris climate process.

For years it has been clear that the world cannot tackle climate change unless China – the largest current emitter – cooperated with the United States – the largest historical emitter.

Without them, global action would diplomatically impossible and scientifically irrelevant.

This was so clear to Barack Obama after the Copenhagen climate summit failed in 2009 that he determined he would pursue a US-China agreement to reduce emissions before the Paris summit began in 2015, in order to drive momentum for climate action.

He dispatched key officials including his chief diplomat, John Kerry, to China in early 2014 in what amounted to a secret mission. Kerry and the White House’s lead climate advisor, John Podesta, led secret negotiations over nine months which led to a shock bilateral announcement in November that year.

Without them, global action would diplomatically impossible and scientifically irrelevant.

Last week again the US announced that Kerry was in China talking climate and this time again the timing is deliberate and crucial. US President Joe Biden will host his online climate summit this Thursday and Friday, and in November the world will meet in Glasgow for the next United Nations climate conference, where nations will be called upon to significantly increase Paris commitments.

But since 2014, the China-US relationship has deteriorated sharply, prompting many to fear that they would not be able to isolate climate cooperation from their broader rivalry.

During an online briefing last week, Podesta told The Sydney Morning Herald and The Age that the relationship between China and the US had reached a low point in its modern history. He said he had spent much of the last year in China in talks with senior officials preparing for a potential Biden presidency, and the extent to which the two nations could cooperate on this issue had become the key global climate question.

Li Shuo, senior climate and energy policy officer at Greenpeace China welcomed the statement, saying it was as strong as the current relationship allowed for.

The two nations had recognised that “it is neither feasible or wise for the G2 to decouple on climate” he said.

The politics, he said, have now improved. What is crucial now is for the details of commitments expected to be announced over coming days to meet the scientific reality of situation.

This would take Chinese commitments to bring forward peak emissions from 2030, and building coal plants domestically and financing them international. America would need to commit to far deeper cuts this decade than 26-28 percent, the same figure Australia is so far standing by.

Most observers are now expecting a US commitment of at least 50 percent.

The announcement also has implications for Australia, said Li.

“It shows Australia is falling further behind. When you are not aligned with either China or the US you know something is wrong.”