Home » Lifestyle » ABC to be grilled over Porter settlement, as management called to face a second estimates hearing

ABC to be grilled over Porter settlement, as management called to face a second estimates hearing

ABC management will be recalled before a parliamentary committee to face questions about the settlement of the defamation case brought by Industry Minister Christian Porter, where the broadcaster could be forced to outline the cost paid to settle the case.

ABC managing director David Anderson will also be questioned about which party initiated the settlement and why the broadcaster agreed to do so.

ABC managing director David Anderson will be recalled to face more questions following the settlement of the defamation launched by Industry Minister Christian Porter against the broadcaster.Credit:Dominic Lorrimer

Industry Minister Christian Porter on Monday dropped his defamation action against the ABC over its reporting of a historical rape allegation against him, but the settlement deal was followed by an exchange of barbs between the parties as they disputed the details. Mr Porter has always strenuously denied the allegations.

No date has yet been set for the hearing, but it is expected to occur next week.

Greens senator Sarah Hanson-Young, deputy chair of Senate’s communications committee, said it was “essential the Australian people know how much this has cost the taxpayer and what has really gone on”.

Mr Anderson gave evidence before Senate estimates last week, days before the settlement was reached in the Porter matter. Under the rules of the Senate, an additional hearing must be scheduled if three members of a Senate committee write to the chair requesting one. 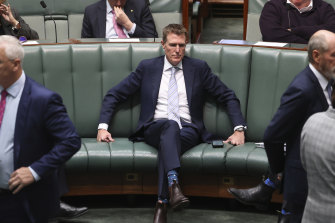 Industry Minister Christian Porter withdrew his defamation action against the ABC on Monday, with the parties settling out of court. Credit:Alex Ellinghausen

Senator Hanson Young and Labor Senators Nita Green and Catryna Blyk co-signed a letter to the chair of the communications committee, Liberal senator David Fawcett, on Tuesday requesting another hearing for “further evidence from the Australian Broadcasting Corporation”.

Mr Porter sought to claim victory on Monday as he withdrew his defamation action against the ABC without a damages payout. Speaking outside the Federal Court in Sydney after the settlement was reached, Mr Porter declared it was “a humiliating backdown by the ABC” and said the broadcaster had been forced to say “they regret the outcome of the article”. He said the deal had been reached after the ABC had requested to enter mediation.

ABC journalist Louise Milligan, who authored the article, fired back on Twitter saying, “Mr Porter proposed a settlement first” and “if he wants to dispute that, happy to refresh his memory and release the terms he offered”.

The ABC also countered several of Mr Porter’s claims in a statement, which began by saying, “The ABC has not said that it regrets the article”.

As part of the agreement, the ABC has since added an editor’s note to the article which states that it “did not intend to suggest that Mr Porter had committed the criminal offences alleged” and “did not contend that the serious accusations could be substantiated to the applicable legal standard – criminal or civil”.

The broadcaster has maintained it has not paid Mr Porter any damages and agreed only to pay his mediation “and related costs”.

Mr Porter launched the defamation action in March claiming the article conveyed a range of defamatory claims, including that “brutally raped a 16-year-old girl in 1988” when he was 17, and this contributed to her taking her own life last year, after she told NSW Police that she did not wish to pursue her complaint.