Home » Lifestyle » After his life flashed before his eyes, Albanese plans to kick with the wind in the final quarter

After his life flashed before his eyes, Albanese plans to kick with the wind in the final quarter

Anthony Albanese is a man under pressure.

The leader of the opposition is behind in the two-party-preferred vote in published opinion polls, though not by much and well behind Scott Morrison as preferred prime minister.

There is chatter in the caucus about his leadership, though no clear alternative has yet emerged – depending on who you talk to, Tanya Plibersek, Jim Chalmers, Chris Bowen and Bill Shorten are all mentioned, though not seriously. 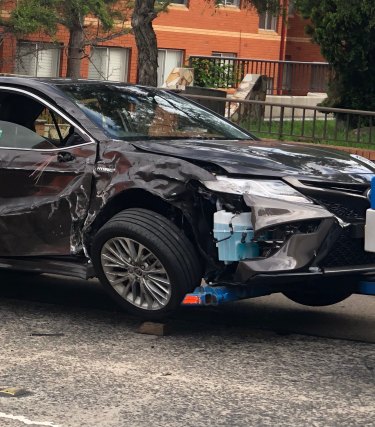 Labor leader Anthony Albanese’s car was badly damaged in an accident on January 8.

Thursday’s reshuffle of his frontbench has not quieted the more restive elements of the caucus, who fear that the deck is simply stacked against Labor, which could be facing a fourth straight election defeat by the Coalition.

COVID-19 has, mostly, benefited incumbent leaders across the country and around the world (Donald Trump being an obvious exception).

But over dinner in Canberra on Wednesday night and then, in a subsequent interview in his office, Albanese betrayed few of the signs of a leader under pressure – though the veteran pollie is alive to the ill winds blowing his way.

Instead, the opposition leader wants to talk about the car crash in early January that nearly ended his life. Albanese has done a series of radio interviews in the wake of the crash, which saw his Toyota Camry hybrid crunched by a much larger Range Rover.

He pulls out his phone, which is still pinging with texts from colleagues with reviews of his just-broadcast interview on the ABC’s 7.30, and starts flicking through photos of the damage before looking me straight in the eye.

A foot or so either way, he says, and it could have been all over – or at the very least, a life-changing injury. It’s not something that, perhaps, his critics in caucus have yet grasped.

But it’s altered the Labor leader’s outlook on 2021 and given him a renewed determination to leave nothing on the table in the lead up to the next election. 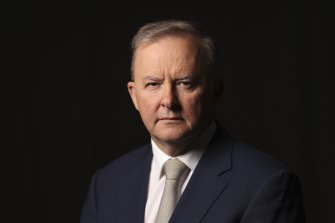 “I thought that 2020 was a tough year. And I was confident that I could deal with whatever 2021 threw at me but now I’m absolutely certain,” he says.

“I wasn’t expecting an accident that could very well have ended my life or, at the very least, changed it with a significant injury.”

The impact of the accident, initially misunderstood because the leader walked away from the scene and spent just a night in hospital, also prompted him to “absolutely” take a few risks in his reshuffle – even though those risks could create new enmities in the caucus.

“I was advised by a number of people, senior former MPs and confidantes that I speak to, you know, always make minimal changes in terms of a reshuffle because . . . it’s difficult and that provides an opportunity for people to be disappointed. But I decided I was determined to do what was right, not what was easy,” he says.

“And what was right was ensuring that we prioritised the issue of national reconstruction [a new role awarded to deputy Richard Marles] and recovery coming out of the pandemic. That we emphasised the priority in terms of jobs and skills, that we ensured that we had the right people in the right positions and so I did that.”

In his time as party leader, Albanese and his partner of 30 years, former deputy NSW Premier Carmel Tebbutt, have also split – a shock he was not expecting on News Years Day 2019 – and he’s even more guarded about newish partner Jodie Haydon. 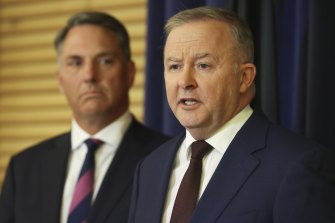 Albanese is happier to discuss how he hasn’t had a drink in 2021, the treadmill in his office which has helped him shed a few kilograms and the record player and vinyl stack sitting on his desk, which includes Springsteen, Alex the Astronaut and Gordi.

He pushes back, hard, when asked if the decision to swap Chris Bowen and Mark Butler into the climate and health portfolios, respectively, had been prompted by the rumblings from backbench rebel Joel Fitzgibbon.

“All that had nothing to do with Joel Fitzgibbon. I think people – caucus members and Labor members – will make their own decisions about whether Joel Fitzgibbon is playing a constructive role.”

His willingness to list Labor’s target seats at the next poll, the slogan Labor will use to appeal to voters and to foreshadow a raft of major policy announcements in the coming months – back-ending policy announcements until later in this term of government was always the plan – underscores that Albanese believes the opposition is still on track.

“When I became leader I said we needed to kick with the wind in the last quarter…that’s why we have done the policy work on that timetable,” he says.

In a message directed squarely at the more nervous members of his caucus, Albanese concludes:

“It’s no good looking back at the last period and wondering how it was that we lost an election having been ahead in every poll for a considerable period of time…what you’ve got to do is to learn from that experience and make sure we’re ahead when the siren goes.”

Whether he succeeds, however, remains to be seen.