Amazon to offer workers time in a coffin-like 'wellness chamber'

Amazon has been ridiculed over plans to put ‘wellness chambers’ in its warehouses so that stressed workers can meditate and watch relaxation videos.

The US retail giant announced the move in a video on its Twitter account, only to swiftly delete the post after it was mocked by social media users.

Many likened the cubicle-sized ‘AmaZen’ pod to a coffin, a ‘crying booth’, and even a Portaloo. 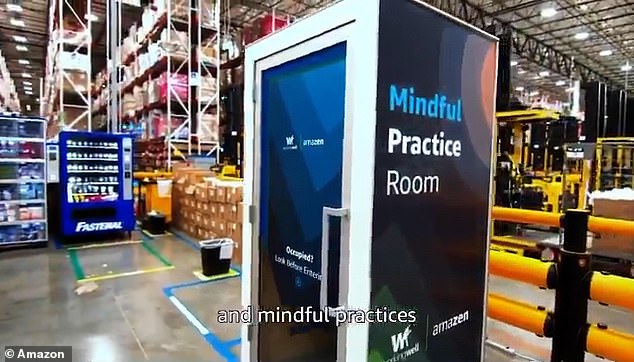 It’s AmaZen! Amazon has been ridiculed over plans to put ‘wellness chambers’ in its warehouses (pictured) so that stressed workers can meditate and watch relaxation videos

Amazon, which has faced repeated criticism about the working conditions at its facilities, said the chamber was aimed at helping staff focus on their mental health.

Inside, there are leaflets and a fan to cool down the employee, plus a few small potted plants on a shelf.

There is just enough room for a chair and small computer table against one wall, while the top of the booth is painted as a blue sky with clouds.

In the now-deleted video, the chamber’s creator Leila Brown said: ‘With AmaZen I wanted to create a space that’s quiet, that people could go and focus on their mental and emotional well-being.

‘The ZenBooth is an interactive kiosk where you can navigate through a library of mental health and mindful practices to recharge the internal battery.’ 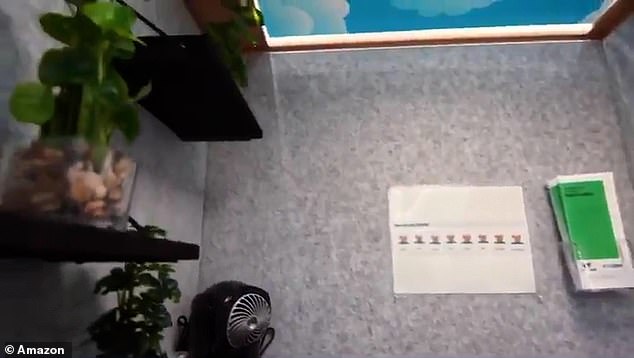 Inside there are leaflets and a fan to cool down employees, plus a few plants on a shelf and a computer to watch relaxation videos. The top of the booth is painted as a blue sky with clouds 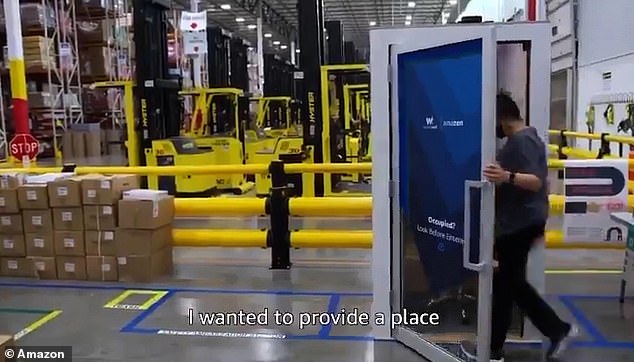 Backlash: In the now-deleted video, the pod’s creator Leila Brown said she ‘wanted to create a space that’s quiet, that people could go and focus on their mental and emotional well-being’ 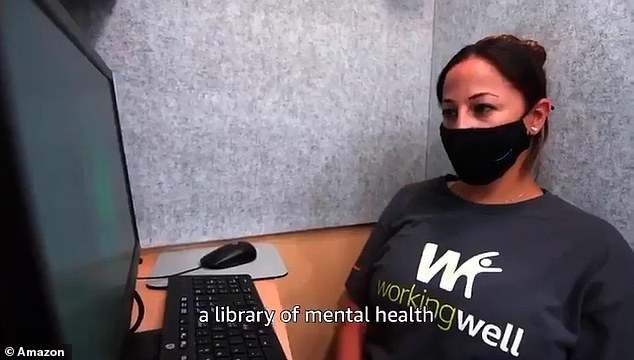 It also announced separate ‘wellness zones’ where employees can stretch out and focus on body mechanics with the help of interactive videos and written guidance.

The wellness pod has been heavily mocked on social media, with Twitter users comparing it to a coffin, crying booth and even a portaloo. 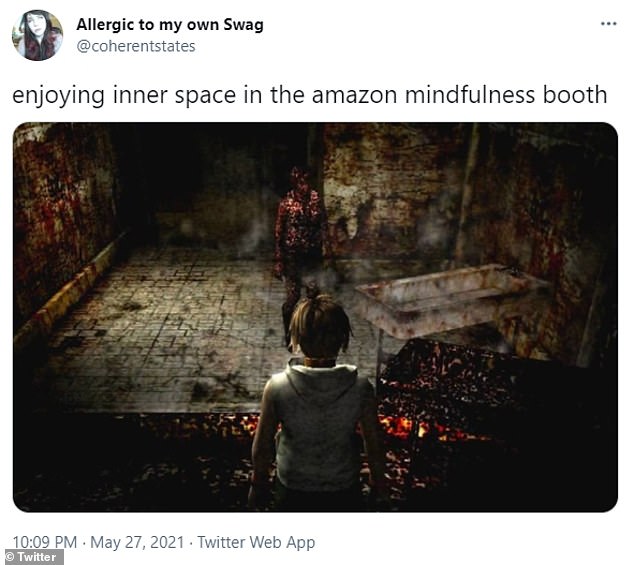 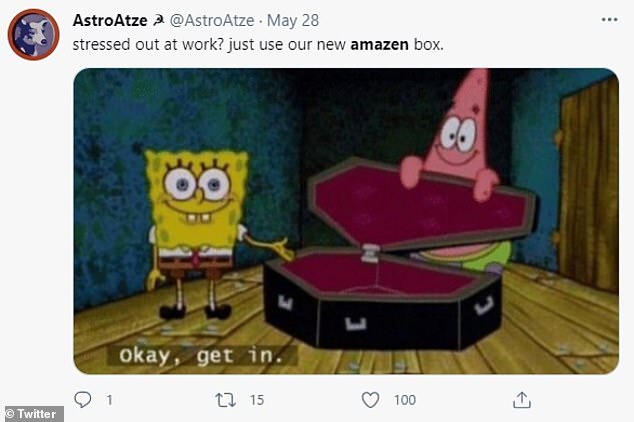 The wellness pod has been heavily mocked on social media, with Twitter users comparing it to a coffin, crying booth and even a portaloo

One user said: ‘I just mentioned the Amazon Health Booth thing as “a coffin for your dignity” in irl conversation and I’m very proud of it.’

Another joked: ‘Having a peaceful break in the mental health closet in the dead center of the factory floor where all my coworkers can visually observe that I’m having a bad mental health day & stare at the lower half of my body through the partially-windowed door.’

Amazon has faced criticism over its ‘poor’ working conditions

Amazon has repeatedly come under fire over working conditions in its warehouses.

Staff at one of the delivery giant’s warehouses were pictured sleeping on the job in Tilbury, Essex in November 2017.

Workers claimed it was because they were tired from having to meet punishing warehouse targets. 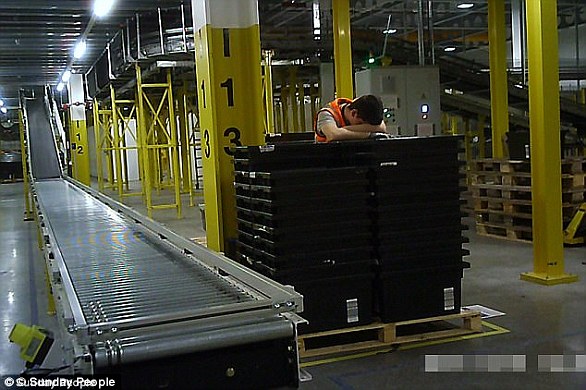 Staff at one of the delivery giant’s warehouse were photographed sleeping on the job in Tilbury, Essex (pictured)

Some staff members were being taken away in ambulances after struggling to deal with the pressure of processing up to 300 items an hour, claimed an investigation by the Sunday Mirror.

An Amazon spokesperson said after the reporting of the incident: ‘Amazon provides a safe and positive workplace with competitive pay and benefits. We are proud to have created thousands of roles in our UK fulfilment centres. As with most companies, we expect a certain level of performance.

‘Targets are based on previous performance achieved by our workers. Associates are evaluated over a long period of time.’

And in December 2016 the Mail on Sunday went undercover at one of the company’s ‘fulfilment centres’ at Gourock, near Glasgow, over the Black Friday period.

Taking a job as a ‘picker’ – employed to collect items from shelves before they are boxed and sent to customers – the undercover reporter worked up to 11-and-a-half hours a day for nine days at one of Amazon’s huge warehouses. 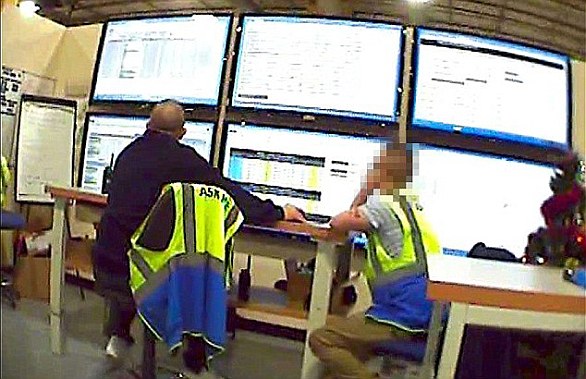 The race against the clock: Amazon’s buzzing warehouse relies on a monitoring system that tracks every item for sale and all staff movements

At the time, Amazon defended its working practices, saying: ‘We provide a safe and positive workplace. The safety and wellbeing of our permanent and temporary associates is our number one priority.

‘One of the reasons we’ve been able to attract so many people is we offer great jobs and a positive work environment, with opportunities for growth.’