Home » Lifestyle » America’s ‘most vicious’ KO artist said he’d be honored to be named MMA’s prospect of the year, but is focused on the UFC title

America’s ‘most vicious’ KO artist said he’d be honored to be named MMA’s prospect of the year, but is focused on the UFC title 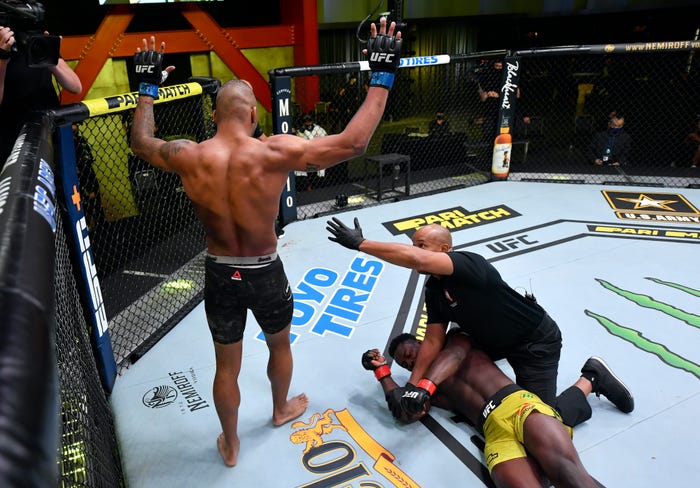 America's "most vicious" knockout artist, Khaos Williams, said he'd be honored to be named MMA's prospect of the year but is only focused on the UFC championship.

Williams talked to Insider this week before returning to the Octagon against Michel Pereira at the UFC Apex in Las Vegas on Saturday.

It will be the fighter's third match of the year, having annihilated Alex Morono 27 seconds into his UFC debut, ahead of a 30-second win against Abdul Razak Alhassan last month.

In those two bouts, Williams has been hit just three times.

"It's been the best for me, career-wise," Williams said of his breakout year in combat sports. "That's for real, man, and this is only the beginning because I never admire my work, and it's only going to get better and better."

Williams' rise in the UFC means victory this weekend, against an experienced opponent like Pereira, could see the 26-year-old become MMA's prospect of the year — beating unbeaten phenom Khamzat Chimaev to that status.

It's been quite a journey for Williams, who got his first taste of knockouts in 2008 when he floored another teenager in a street-fight and shook hands afterward.

"I think I was 14 the first time I knocked somebody out. It was out on the street. I knew the dude, somebody I was having little problems with, but there was no trouble after that — it was just mutual respect."

Respect is something Williams has a lot of now

Though Williams had fought nine times before signing a deal with the UFC, it was not until this year when he attracted praise from some of the most influential people in the business.

After bulldozing through Morono at the UFC 247 event in Texas, February, the UFC commentator Joe Rogan said: "That's how you make a UFC debut, ladies and gentlemen," saying the win was "outstanding."

Then, after sleeping Alhassan with one punch, the UFC President Dana White said the knockout was "one of the most vicious KOs" he'd ever seen in his life.

"Man, between both of those GOATs in the game, you know, being around 20+ years … it's just amazing to hear that praise," Williams told Insider.

"I've been telling people what kind of fighter I am, and now I'm finally making a name for myself in the business.

After his most recent win, Williams warned the welterweight division that nobody is "bulletproof" and that he'll knock everybody out in his weight class.

"My power is God-given talent," he told us. "When I say nobody's bullet-proof, I mean in general, in human beings.

"If you hit somebody hard enough on the chin, they're going to sleep. And what I mean by bullet-proof is we all bleed the same."

Williams could become MMA's prospect of the year

"I've seen that possibility," Williams said when Insider asked if he was aware a third win this weekend could see him surpass Chimaev as the favorite to be MMA's prospect of the year.

"It's definitely a great accomplishment and a blessing. That's like the defensive player of the year or an MVP — that's great. I don't want to downplay that.

"But it's like going for the NBA championship. We want the UFC championship one day — that's what's most important.

Williams and Chimaev both compete in the same 170-pound weight class. So could we see a battle of super welterweight prospects in 2021?

"This is the thing," Williams said. "I'm not really looking at nobody, I'm not looking past anybody, but I'm looking through everybody.

"I'm focused on me being the best me I can be, and whatever happens, happens. If that's what's supposed to happen, that's what happens.

"I'm not taking the time to focus on anybody but perfecting my craft. They've got to focus on me."

On what aspects of his fighting style he wants to perfect the most in upcoming training camps, Williams said: "Just to continue chiseling at my craft, continuing to progress every day.

"Every day's a potential day for progress, and I just want to keep getting better as far as my striking, strength, speed, IQ, my jiu-jitsu, wrestling, and everything goes.

Williams is confident he beats everybody at 170-pounds

"I feel confident against anybody," Williams told us. "If you get in there with me, you feel you can beat me, and I'm going to show you otherwise.

"I'm just so excited to keep chiseling away at my destiny and making history because I'm just getting started, for real. Michel Pereira is just another man in the way," he said of his UFC Fight Night 183 bout in Vegas.

Williams has earned additional $50,000 performance-related bonus checks in both UFC outings to date, and a third check for a knockout win this weekend "would be a great Christmas" in his household.

"But I just want to go in there and get the W [win]. If I do it in extraordinary fashion and knock him out, that's what happens.

"But I've got to go in there, be technical, and take my time — that's the way it's going to be. I adapt to anybody, adapt to the fight, and feed off his energy."

Williams mentioned his ultimate ambition in ultimate fighting is the UFC title but was reluctant to give a precise timeframe of when he hopes to secure a title fight.

"It all depends on how I beat this guy Saturday," he said. "I just take it one win at a time. I never want to downplay nothing.

"It might be a year, two years, three — I ain't rushing. I'm just getting better, so when the time comes, I take advantage of the opportunity which is presented.

"My hunger is different [to everyone else]," he added.

"I'm extraordinary, gifted, and different to these other dudes mentally.

"I feel like nobody is going to be stronger than me because my work-rate is outrageous, and we're just going to keep testing those chins [with knockout punches].

"They're all in the way of me and my ambition."