Ancient ‘hell ants’ had deadly scythe-like mandibles that they used in a vertical motion to pin prey against their horn-like appendages, 99 million-year-old amber fossil reveals

Ancient ‘hell ants’ had deadly scythe-like mandibles that they used in a vertical motion to pin prey against their horn-like appendages, a fossil has revealed.

The 99 million-year old insect stunningly preserved in amber from Myanmar was trapped just as it embraced its final victim — an ancient relative of the cockroach.

Alongside revealing just how prehistoric hell ants used their mandibles, the specimen is also helping experts discern how the killer features first evolved. 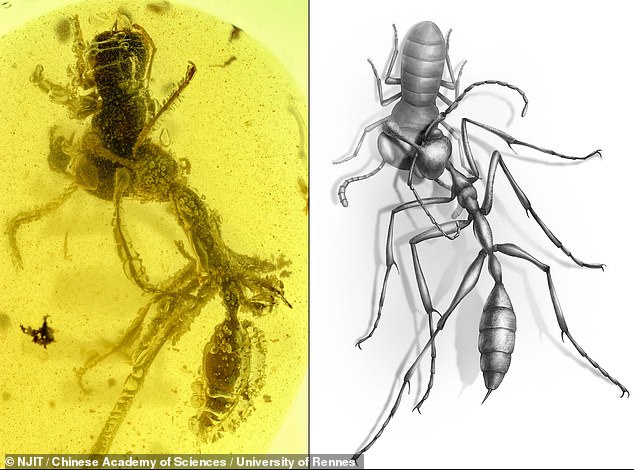 The 99 million-year old insect stunningly preserved in amber from Myanmar was trapped just as it embraced its final victim — an ancient relative of the cockroach, pictured

There are 16 known species of hell-ants — including one dubbed Linguamyrmex vladi, after the 15th Century Romanian ruler Vlad the Impaler, which was formerly named by entomologist Phillip Barden and colleagues in 2017.

According to Dr Barden, the hell ants’ fearsome, integrated head and mouth weaponry — which allowed them to clamp their prey in their grasp — would have first evolved from the ability to move their mouthparts vertically.

This, in turn, would have allowed the mouthparts and the ants’ heads to work together in a way that is unique to this now-extinct lineage.

‘Integration is a powerful shaping force in evolutionary biology,’ said Dr Barden, who works at the New Jersey Institute of Technology.

‘When anatomical parts function together for the first time, this opens up new evolutionary trajectories as the two features evolve in concert,’ he added.

‘The consequences of this innovation in mouthpart movement with the hell ants are remarkable.’

‘Vlad’, in particular, had a nasty form of attack — with the team believing that it used a metal-reinforced horn on it head to impale prey, an ability which may have been used to feed on the internal liquids of other insects.

‘While no modern ants have horns of any kind, some species of hell ant possess horns coated with serrated teeth,’ Dr Barden added.

‘Others, like Vlad, are suspected to have reinforced its horn with metal to prevent its own bite from impaling itself.’ 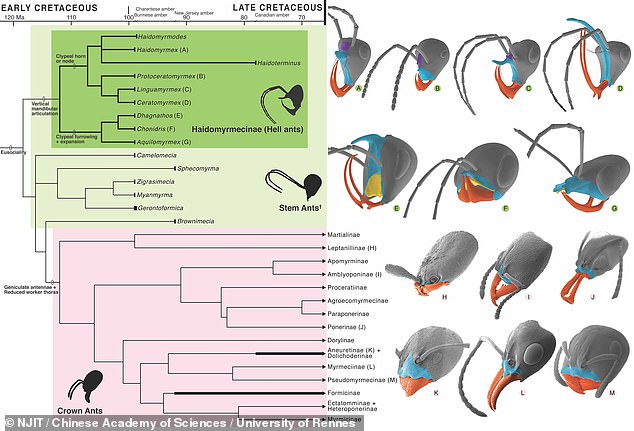 The researchers compared the heads and mouthparts of hell ants with those of other fossil and living ant species — alongside reconstructing the evolutionary relationships between them all. The team concluded that the hell ants belong to one of the earliest branches of the ant evolutionary tree — and that they have a unique configuration of integrated weaponry

According to the researchers, the discovery of the new fossil demonstrating the hell ant’s feeding mode helps to explain the ancient insect’s unusual morphology.

Furthermore, the find highlights a key difference between modern ants — whose mouthparts all grasp from side-to-side — and some of their earliest relatives.

As with many other early ant lineages, the hell ants are believed to have become extinct around 65 million years ago during a period of ecological change.

‘As palaeontologists, we speculate about the function of ancient adaptations using available evidence, but to see an extinct predator caught in the act of capturing its prey is invaluable.’

‘This fossilised predation confirms our hypothesis for how hell ant mouthparts worked,’ he continued.

‘The only way for prey to be captured in such an arrangement is for the ant mouthparts to move up and downward in a direction unlike that of all living ants and nearly all insects.’ 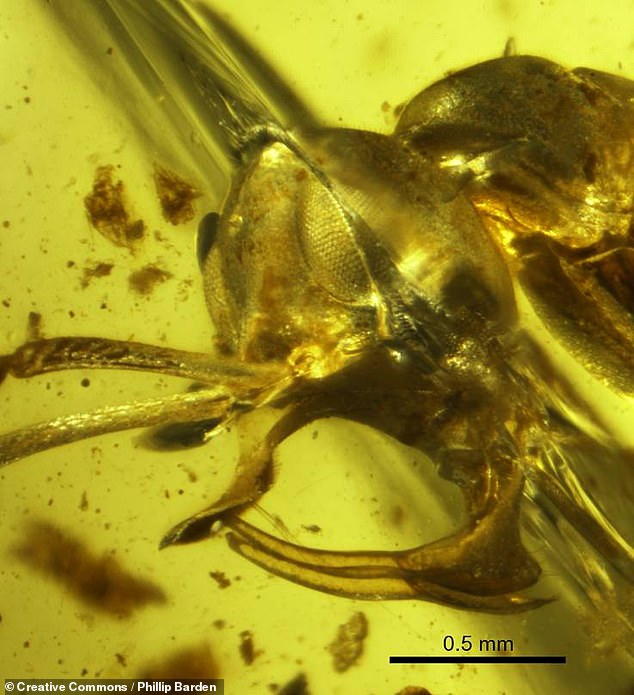 There are 16 known species of hell-ants — including one dubbed Linguamyrmex vladi, after the 15th Century Romanian ruler Vlad the Impaler, pictured, which was formerly named by entomologist Phillip Barden and colleagues in 2017. ‘Vlad’ had a nasty form of attack — using a metal-reinforced horn on it head to impale prey

The new specimen could finally clear up why hell ants are so different from their modern-day counterparts — a mystery which has puzzles biologists and palaeontologists ever since the first hell ant was found around a century ago.

‘This fossil reveals the mechanism behind what we might call an “evolutionary experiment”,’ explained Dr Barden.

‘Although we see numerous such experiments in the fossil record, we often don’t have a clear picture of the evolutionary pathway that led to them.’

To explore further, the researchers compared the heads and mouthparts of hell ants with those of other fossil and living ant species — alongside reconstructing the evolutionary relationships between them all.

The team concluded that the hell ants belong to one of the earliest branches of the ant evolutionary tree — and that they have a unique configuration of integrated head and mandible weaponry.

The new find has finally provided Dr Barden and colleagues with answers as to how this long-lost class of deadly ants reigned for nearly 20 million years.

However, questions still remain — such as exactly why these and other lineages went extinct while modern ants flourished.

With their initial study complete, the team is now looking to describe other ants from new fossil deposits to learn more about how extinction impacts groups differently.

‘Over 99 per cent of all species that have ever lived have gone extinct,’ Dr Barden commented.

‘As our planet undergoes its sixth mass extinction event, it’s important that we work to understand extinct diversity and what might allow certain lineages to persist while others drop out.’

‘I think fossil insects are a reminder that even something as ubiquitous and familiar as ants have undergone extinction.’

The full findings of the study were published in the journal Current Biology.

WHAT FOSSILS HAVE BEEN FOUND IN BURMESE AMBER?

Amber, often used in jewellery, is fossilised tree resin, and the oldest dates back more than 300 million years.

In the past few years the Hukawng Valley in northern Myanmar, formerly Burma, has yielded numerous finds.

In January 2017, researchers discovered a 100-million-year-old insect preserved in amber which bore a passing resemblance to ET.

Its features were so odd and unique that researchers placed in into a new scientific order of insects.

The creature had a triangular head and bulging eyes, which is different from any other known species of insect.

The eyes on the side of its head would have given it the ability to see at almost 180 degrees by simply turning its head to the side.

Because of its uniqueness, the insect was assigned its own brand new scientific classification order – called Aethiocarenodea.

In June 2017, researchers revealed a stunning hatchling trapped in amber, which they believe was just a few days old when it fell into a pool of sap oozing from a conifer tree in Myanmar.

The incredible find showed the head, neck, wing, tail and feet of a now extinct bird which lived at the time of the dinosaurs, 100 million years ago, in unprecedented detail.

Researchers nicknamed the young enantiornithine ‘Belone’, after a Burmese name for the amber-hued Oriental skylark.

The hatchling belonged to a group of birds known as the ‘opposite birds’ that lived alongside the ancestors of modern bird.

Archaeologists say they were actually more diverse and successful – until they died out with the dinosaurs 66 million years ago.

They had major differences from today’s birds, and their  shoulders and feet had grown quite differently to those of modern birds.

In December 2017, experts discovered incredible ancient fossils of a tick grasping a dinosaur feather and another – dubbed ‘Dracula’s terrible tick’ – swollen after gorging on blood.

The first evidence that dinosaurs had bloodsucking parasites living on them was found preserved in 99 million-year-old Burmese amber.

The newly-discovered tick dates from the Cretaceous period of 145 to 66 million years ago.