AROUND 114,000 more workers lost their jobs last month as 730,000 people have now become unemployed since March due to coronavirus.

The decrease in employment between April and June is the largest quarterly drop since 2009, the Office for National Statistics (ONS) said. 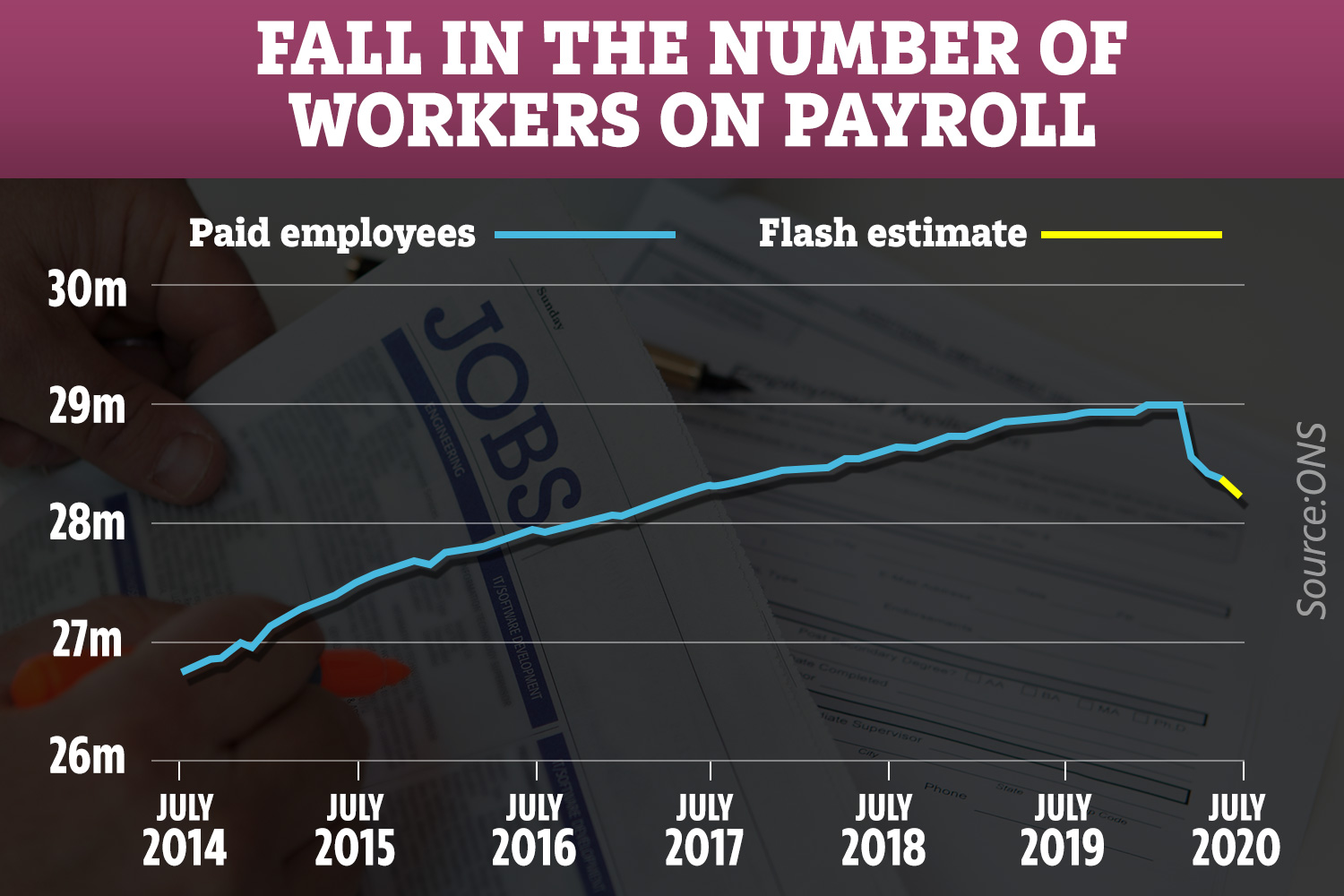 The number of average hours worked also continued to fall, reaching record lows both on the year and on the quarter, it added.

The number of people claiming work-related benefits such as Universal Credit, including those on low incomes, was 2.7million.

This figure has more than doubled since March – soaring 116.8 per cent – in a sign of the mounting jobs crisis.

In June alone, the number of Brits on payroll fell by 74,000 workers.

What to do if you're facing redundancy

LOSING your job can be incredibly stressful, we explain what you should keep in mind.

Unemployment hasn't risen as much as feared because a large number of workers have been put on the government's furlough scheme, meaning they're still classed as employed.

Experts say the full effect on unemployment will be felt once the scheme ends in October.

Last week, the Bank of England predicted unemployment could hit 7.5 per cent due to the coronavirus crisis.

While last month, the Office for Budget Responsibility (OBR) predicted that unemployment is set to hit 12 per cent this year as the furlough scheme winds down.

ONS deputy national statistician for economic statistics Jonathan Athow said: "Figures from our main survey show there has been a rise in people without a job and not looking for one, though wanting to work.

"In addition, there are still a large number of people who say they are working no hours and getting zero pay.

"The falls in employment are greatest among the youngest and oldest workers, along with those in lower-skilled jobs.

"Vacancies numbers began to recover in July, especially in small businesses and sectors such as hospitality, but demand for workers remains depressed."

Jeremy Thomson Cook, chief economist at Equals, said: "The latest UK unemployment release confirms two things; the true level of those out of work has been very effectively lowered by the government’s furlough scheme.

"But, more importantly when thinking about a recovery, the level of employment has continued to fall as those who have lost their jobs through the pandemic have not yet found their next role."

"Unfortunately, the end of the furlough scheme will present a cliff-edge, statistically and economically, for those currently relying on government support to make up their wages.

"Longer-term government stimulus to create jobs is needed to ensure the gap between the end of the furlough scheme and a rise in employment is not larger than it needs to be."

As part of changes to the coronavirus jobs retention scheme, employers have to chip in to pay for National Insurance and pension contributions for furloughed staff from August.