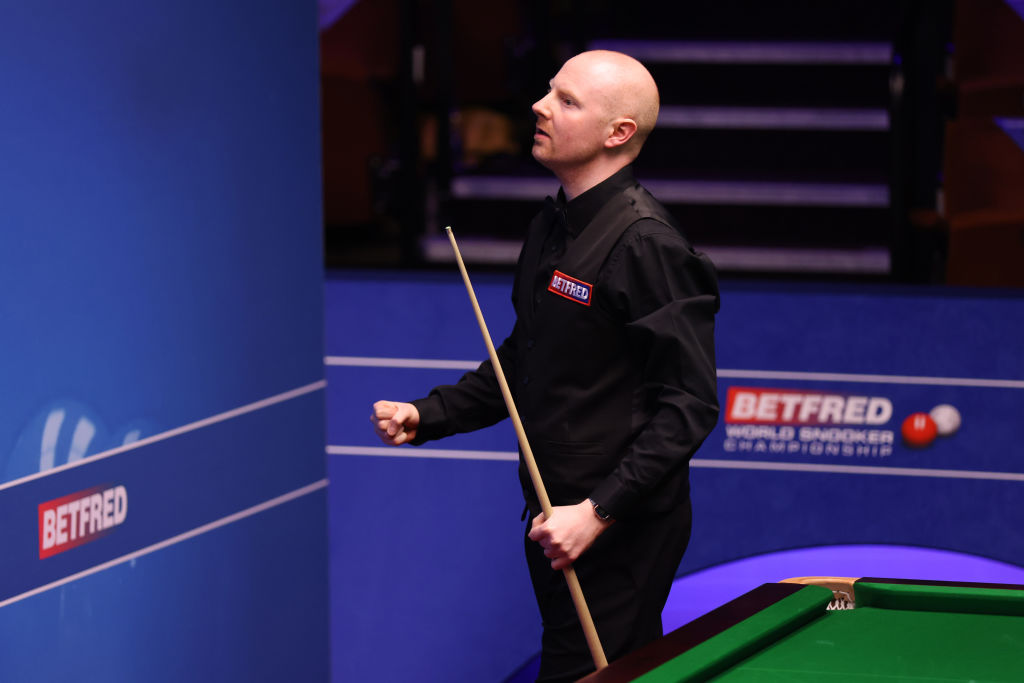 Anthony McGill said the game ‘felt so easy’ at times during his shock 13-12 win over Ronnie O’Sullivan in the second round of the World Snooker Championship on Friday night.

The Scot pulled off the superb upset win after the momentum swung both ways and it looked like O’Sullivan was set to pull off an amazing comeback win.

McGill was 10-5 ahead at one stage but then found himself 12-11 down in the race to 13 and the Rocket looked set to break the Scot’s heart.

The Glaswegian showed his supreme class, though, making a 136 total clearance to level things up before a break of 85 to get over the line in the final frame.

The defending champion was 4-1 up before McGill won seven frames on the spin to take a big lead and at that stage he felt unbelievably comfortable.

Things got stickier later in the contest, but he always felt confident, even when the Rocket was firing himself.

‘I played really well this morning, it felt so easy,’ McGill told Eurosport. ‘I don’t really remember missing a pot actually. Every time I got in I seemed to make a break, win the frame, it felt so easy.

‘Then tonight Ronnie came back at me and it didn’t feel quite as easy.

‘It’s difficult because you’re thinking, “I’m playing so well, 10-6 up and I should win from here.” Even against Ronnie at 10-6 up you should win, or you feel like that.

‘Then he’s coming back at you, before I knew it it was 10-9 and I was thinking, “man, I wish I could just go back to the start again.”

‘I just tried to play one frame at a time, even when it was going well I tried to not get carried away. If I made a break in the previous frame, every frame’s a new frame.

‘I felt good tonight, just couldn’t get it going. I missed a couple of easy shots, made a few mistakes but I still felt good. I didn’t feel like I was good, my game was still there.

‘I felt as though if I got a chance in the balls I was going to win the frame.’

McGill is a stoic character at the table but understandably unleashed a roar and fist pump when he potted the winning ball, releasing some serious emotion as he bounces back from a crushing deciding frame defeat in last year’s semi-finals to Kyren Wilson.

‘I’ve never done that before in my life, never. I didn’t plan it, it just happened,’ he said.

‘I put so much practice in and you feel as if you never get any reward. It was sickening to lose last year so to win a big match just feels so good.’

The 30-year-old was also delighted to be able to perform in front of a crowd again after his epic 17-16 tussle with Wilson was played behind closed doors 12 months ago.

McGill now takes on either Stuart Bingham or Jamie Jones in the quarter-finals, with their last 16 tie getting underway on Sunday morning.

The Rocket was in philosophical mood after the defeat and is pleased to be enjoying snooker again despite the defeat.

‘I’ve worked hard with [sports psychiatrist] Steve Peters over the last couple of days and the best thing that’s come out of it is hopefully I can enjoy my snooker now, I’ve found a way to enjoy it because that’s all that matters to me,’ Ronnie told Eurosport.

‘Winning and losing, at this stage of my career, yeah it’s disappointing but for me, but I’ve got a good life playing snooker.’