Hundreds of cars were backed up at Los Angeles’ Dodger Stadium on Saturday after the coronavirus vaccination super site temporarily shut down after a few dozen anti-vaccination protesters, the mayor’s office confirmed on Sunday. The site shut down for about 55 minutes, but no appointments were canceled, said Andrea Garcia from Mayor Eric Garcetti’s office.

“City of LA’s vaccinations at Dodger Stadium were interrupted for 55 minutes by protesters on Saturday,” Garcia said in an email. “The LAPD responded and the site resumed operations. No appointments were affected. We remain committed to vaccinating Angelenos as quickly and safely as possible.”

Los Angeles police Chief Michel Moore tweeted on Saturday afternoon that they were “working with our public safety partners to ensure everyone with an appointment gets their vaccine today.”

A livestreamed video of the protests showed them carrying signs that read phrases such as “TURN BACK NOW,” “My rights don’t end where your fear begins,” and “COVID=SCAM.”

California Governor Gavin Newsom tweeted Saturday night: “we will not be deterred or threatened.” 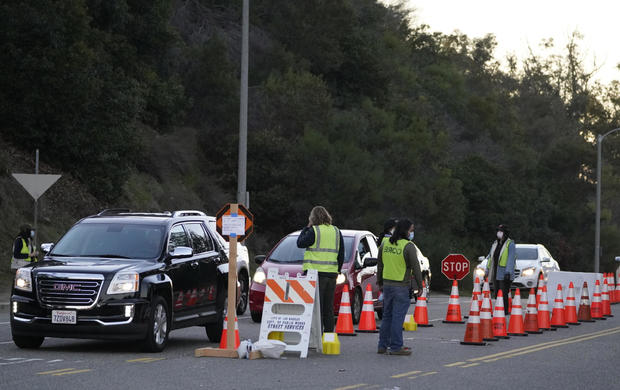 One man who was waiting on line for an hour told the Los Angeles Times that protesters told him the coronavirus is not real and vaccinations are dangerous.

“This is completely wrong,” German Jaquez told the LA Times. “This is the wrong message. I’ve been waiting for weeks to get an appointment. I am a dentist; I am taking a big risk being around patients. I want to be safe for my patients and for my family. The vaccine is the only way to beat the virus.”

Meanwhile, allocations of COVID-19 vaccine continue to trail the demand, with Los Angeles County expecting to receive roughly 188,000 doses next week, CBS LA reports. Many of those, however, will be needed to administer second shots to people who have already received the first dose of the two-dose regimen.

As of the end of last week, the county had received a total of 853,650 doses. It received an estimated 143,900 doses this week, pushing the total to nearly 1 million.

While the positivity rate has been trending downward in hard-hit LA County, there were over 6,000 new cases reported on Friday, the last day data was available from the county health department. There have been over 1.1 million cases of COVID-19 reported in the region, and scientists estimated earlier this month that 1 in 3 Los Angeles residents have been infected by the coronavirus since the pandemic began.