Home » Lifestyle » Apple iMac 27-inch review: the best iMac you can buy …but that might not be true for long

Apple iMac 27-inch review: the best iMac you can buy …but that might not be true for long 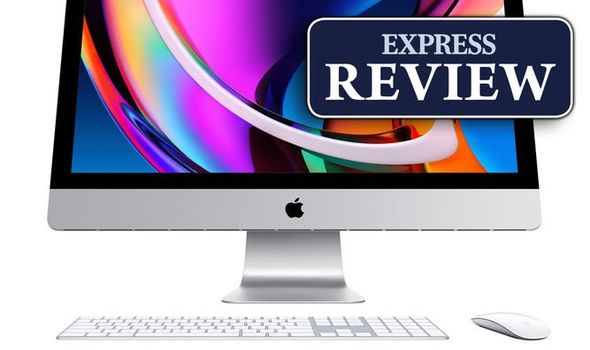 In the last few months, the world has changed dramatically. With the ongoing public health crisis forcing more and more of us to work from home for the foreseeable future, it’s no wonder PC sales have enjoyed a significant surge. Apple recently reported double-digit growth for its Mac range. If you’ve been toying with the idea of upgrading your desktop computer, the US firm has just made the decision even easier.

The upgraded 27-inch Apple iMac was unveiled last week with a swathe of upgrades over the previous model. This mighty all-in-one desktop machine has been on our desk for a little while now, so here’s our 27-inch iMac review.

From the moment the giant box lands on your doorstep, one of the best things about the iMac is how simple it is to set up and use. Remove it from the packaging, pop the power cord in the back, switch on the wireless keyboard and mouse and you’re good to go – it really is that easy.

Since the first colourful iMac was launched back in 1998, this simplicity has been one of the things that made this computer such an attractive option for families across the world – and in that respect, nothing has changed with the latest entry into the iMac range.

On the subject of nothing changing, when you get the new iMac setup on your desk, you’ll notice that Apple hasn’t changed the way this desktop PC looks. You’ll still find the same aluminium design with the Bluetooth mouse and keyboard to keep your desk free of annoying and unsightly cables. 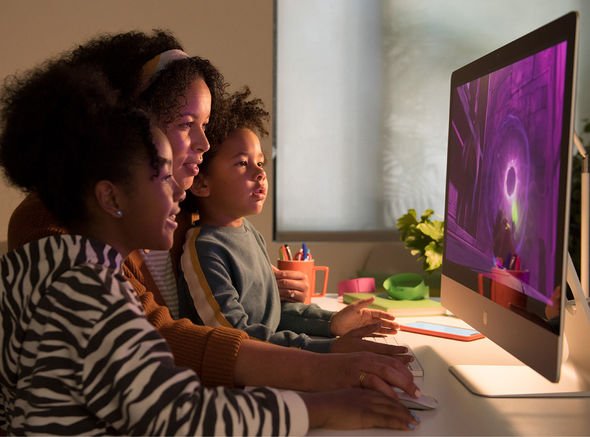 The iMac still looks good, but it’s disappointed that the styling hasn’t had a refresh. Even a small reduction to the chin at the base of the screen or smaller bezels around the display would’ve made things way much more exciting. With edge-to-edge screens now found on the iPhone, iPad, and 16-inch MacBook Pro, the eight-year-old iMac design is starting to look a little dated in the Apple Store. Rumours have been rife that the iMac is set for a dramatic design upgrade soon, but it seems that wasn’t ready for this latest refresh.

Fortunately, while the outside hasn’t changed, there has been plenty of upgrades inside that make this machine a solid upgrade. Starting with the display, Apple is now offering iMac customers the chance to add something called nano-texture to the pin-sharp 5K Retina screen. This makes panel far less reflective, so you can position the iMac anywhere in the room without worrying about windows or lamps reflecting back at you while you work. 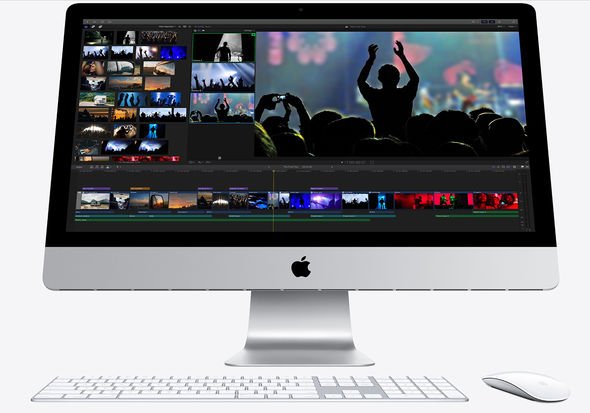 The nano-texture process does cost an additional £500 when buying the iMac, but it’s well worth considering if you get fed up with glare and reflections distracting you from what’s taking place on the screen. While all iMacs ship with a certain amount of anti-reflective coating, these pale in comparison to the new nano-texture process, which was originally developed for Apple’s Pro Display XDR, which is favoured by professional photographers and editors.

If you’re serious about wanting no-glare on the expansive 27-inch glass display when working, this nano-texture surface – created by etching nano structures into the glass itself – works incredibly well. It won’t remove reflections entirely (glass is still glass, after all) but it’s as good as anything we’ve ever seen.

Thanks to the addition of an Apple-designed T2 chip under the bonnet, the iMac display also now benefits from Apple’s True Tone technology, which uses adjusts the warmth and intensity of the display to match the ambient light in the room. True Tone has been a staple in the iPhone and MacBook lineup for a number of years and it’s nice to see Apple bringing it to the iMac as it really does help your eyes when staring at the screen for long periods.

Moving inside the aluminium chassis, there’s plenty more treats to be found, including new Intel 10th-generation processors, which make this Apple iMac around 65 percent faster than before. There are 6, 8 and 10-core options available so it is really is up to you how much power you think you’ll need and how much money you have in the bank. 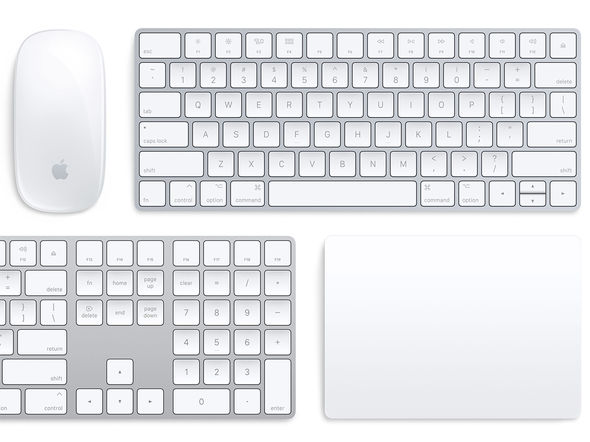 As an example, the entry-level machine with a 6-Core Intel processor costs £1,799 but pop the 10-Core in your shopping basket and you’ll face a £2,699 bill – and that doesn’t include the £500 nano-textured glass.

And since only the RAM can be upgraded at-home on your iMac, whatever you pick will need to last the lifetime of the iMac. So, skimping at checkout now might leave you with a computer that struggles to multi-task a few years down the road. Whereas opting for the top-of-the-line could dramatically extend the lifetime of this all-in-one (provided you’re not tempted to upgrade early by that new design whenever it does finally materialise).

We’ve been using the 10-core model with 32GB of RAM and a 1TB hard drive (total cost £3,699) which is clearly a bit of a beast when it comes to performance but it’s an absolute joy to have on the desk. Every task is performed without the hint of a stutter and even 4K movie editing or high-resolution image crunching in Photoshop won’t put this iMac under any strain.

To help speed things up even more is the inclusion of Radeon Pro 5000 series graphics, which bring higher transistor counts, faster clock speeds and improvements in power efficiency. Along with this performance boost, the other big changes come to three vital areas of the iMac. 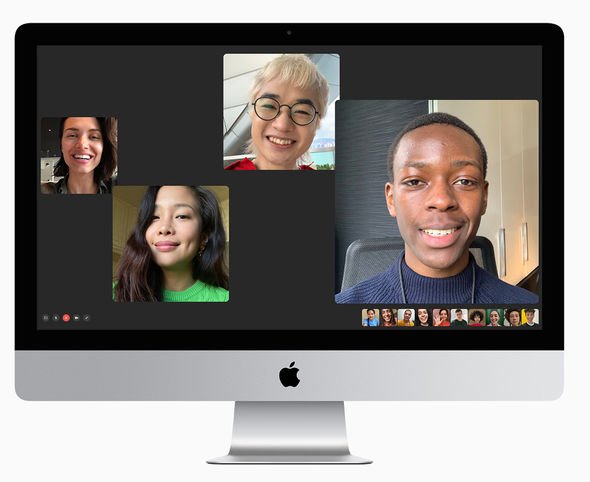 Owners are now treated to a new 1080p FaceTime camera which is definitely an improvement when making those socially distanced video calls.

It’s worth noting that this camera can also recognise faces to help boost the way you look on screen by adding light to your features so your expression is always visible on video calls (even if you’re sat in-front of a window). Unfortunately, unlike with iPhone or iPad, this clever face recognition tech can’t be used to unlock the device with a glance, which is a mighty shame.

There’s also an updated studio-quality three-mic array so your voice sounds crystal clear. That’s not only important for your next Zoom meeting but also means this machine does a pretty good job if you want to use it for tasks such as Podcasts. Finally there’s a tweak to the speakers. It’s worth pointing out the speakers on the iMac 27-inch are exactly the same as the previous model, however, they have been improved thanks to Apple’s custom-designed silicon.

An advanced variable EQ, enabled by the audio controller in the Apple T2 Security Chip, provides a much better balance. The iMac speakers already sounded good, but this update just takes things up a notch with audio packing a little more bass. 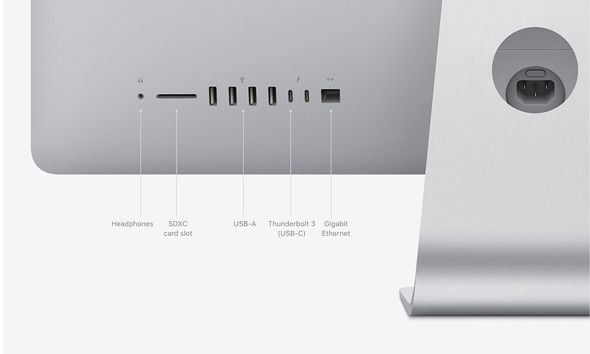 So, there’s clearly plenty to love about the new iMac and the fact that Apple hasn’t ramped up the pricing makes it an even more attractive purchase.

Apple iMac 27-inch review: One Thing You Need To Remember Before Buying This Mac

There’s one big thing you need to think about before rushing out to buy this new 27-inch iMac. Apple recently confirmed a radical move to its own custom-designed processors, which means this will probably be the last iMac to include Intel power. Apple says it will have moved over to its own chipsets “within two years”. And that announcement was almost two months ago.

With the clock ticking, it’s still unclear how much more grunt Apple’s own chips will produce, but we’re expecting some pretty dramatic changes over the coming months to the entire Mac line-up. And given the upgrades found in this latest iMac from the addition of an Apple-designed chip (the improved speaker sound, the sharper webcam with AI-enabled lighting effects to keep you looking clear on video calls, and True Tone support…) it’s clear that we’re going to see some exciting new announcements from Apple when the first batch of Macs powered by Apple-designed silicon arrive on store shelves.

Whether the move to an Apple chipset coincides with a long overdue design refresh for the iMac remains to be seen. But it’s worth remembering that Apple is committed to a drastic change to its Mac computers in the very near future – and this iMac is one of the last to launch before those changes kick-in.

Apple says it will be committed to looking after customers with Intel-based chips – like those who buy the 27-inch iMac – for “years to come”, so there should be software updates and new features coming to this all-in-one for the foreseeable future. However, there’s no question that its main focus will be the new machines powered by its own silicon. 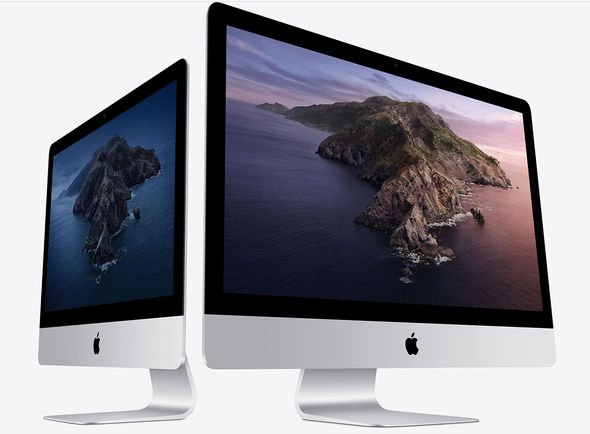 If you’re in desperate need to upgrade your ageing iMac, the latest 27-inch all-in-one from Apple is not going to disappoint. This is one impressive desktop machine that will power you – and the whole family – through a day without breaking a sweat.

The addition of True Tone looks great on the expansive 27-inch screen and that £500 nano-texture technology option is the best we’ve seen for reducing annoying glare. The new camera, microphone and improved speakers are all welcome additions and the simplicity of this machine remains a big draw.

There’s also that new SSD hard drive, which makes saving files far much faster than the older Fusion Drive (although the Fusion Drive is still an option when buying the smaller 21-inch model, Apple has moved over to faster SSDs completely when configuring a 27-inch iMac).

Our only gripe with the 27-inch iMac is that, after almost a decade, the design is starting to look dated. Speaking of dated, typing out a password each time you want to login or authorise an Apple Pay payment feels very old fashioned, especially as every other device from the Apple Store uses either Face ID facial recognition (like on the latest iPhone and iPad models) or a Touch ID fingerprint scanners (found on MacBook Air and MacBook Pro) to make that same process much less painless.

Then there’s the future as it’s clear some very big changes are coming over the next 12 months or so, including machines that will be entirely made and powered by Apple. If you can’t wait that long, this 27-inch iMac is a solid choice that won’t let you down. Just don’t be annoyed when something even better comes along in 2021.