Apple is "stepping up" its efforts to build a search engine, amid a US government investigation that has placed a deal to use Google's engine on iPhones under threat.

According to the Financial Times the recent release of Apple's new iPhone software, iOS 14, includes a limited Apple search engine that handles web queries made through the new Today View screen.

Apple's web crawler, Applebot, has also increased its activity in recent weeks. Crawlers like Applebot automatically visit millions of web pages as they seek to build up a comprehensive map of the internet in order to improve search engine results. 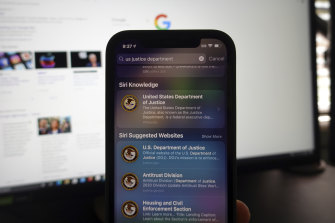 Apple has started linking directly to websites through its own search function on iPhone.Credit:Tim Biggs

The changes point to efforts by the iPhone-maker to build a rival to Google's search engine, which is used around 1.2 trillion times per year worldwide. The FT also highlights the fact that John Giannandrea, Google's head of search, was hired by Apple in 2018 and runs Apple's machine learning and artificial intelligence strategy.

A rival search engine could be vital for Apple if the US government seeks to crack down on the multi-billion dollar payments made by Google in order to keep Google Search as the default search engine on Apple products.

The US department of justice's antitrust lawsuit against Google, which was filed last week, places particular emphasis on the search engine company's payments, which range between $US8 billion ($11.3 billion) and $US12 billion, to keep Google as the default iPhone search engine.

The US lawsuit criticised this arrangement, claiming that few iPhone users change their default search engine from Google, meaning the deal results in an "exclusive" search engine arrangement.

US government lawyers cited a Google document in the lawsuit which called the deal with Apple a "significant revenue channel", adding that losing the arrangement would be a "Code Red" scenario for the company.

Google estimated that almost half of its search traffic in 2019 came through Apple devices, the US government claimed in the filing. Apple did not reply to a request for comment.

Most Viewed in Technology