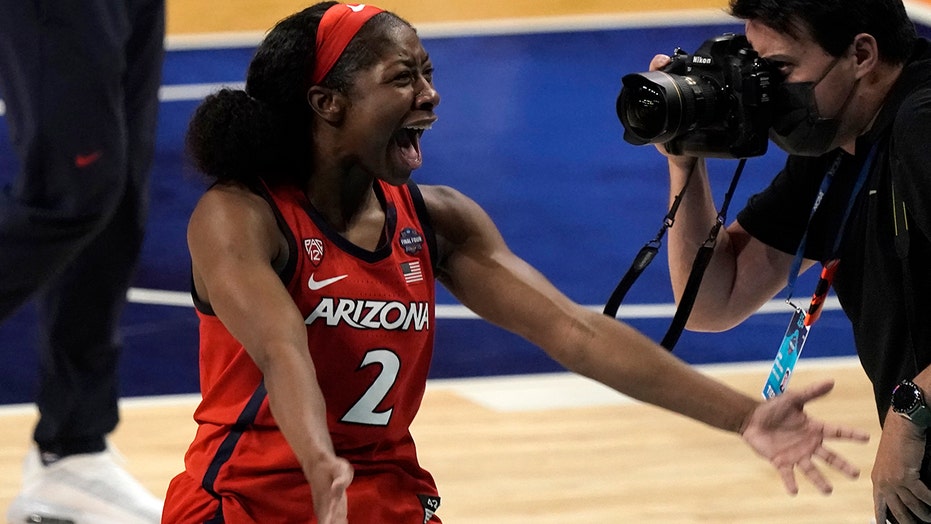 Aari McDonald and Adia Barnes have marched Arizona out of the basketball desert to the doorstep of a national championship.

McDonald scored 26 points and led a smothering defensive effort as the Wildcats beat UConn 69-59 Friday night to advance to the women’s NCAA Tournament championship game for the first time in school history.

The Wildcats never trailed against the favored and fabled Huskies, who have made the Final Four 13 consecutive times, but haven’t made the championship game since 2016 when UConn won its 11th title.

And Barnes, who led Arizona to the NCAA Tournament as a player two decades ago, is now just the third coach to lead her alma mater to the championship. It comes five years after she took the job to rebuild one of the worst programs in the Pac-12.

Arizona will face Stanford on Sunday in the first all Pac-12 final. Barnes got there by beating UConn and Geno Auriemma, who coached all of UConn’s 11 championships.

McDonald, who stands just 5-foot-6, has led the way on the court since transferring from Washington and sitting out her first season when Arizona won just six games.

She did it all for the Wildcats against UConn with slashing drives, pinpoint shooting from long range, and a defensive intensity that held UConn’s star freshman Paige Bueckers in check for long stretches.

Arizona held UConn to a season-low in points and led by 14 late in the third quarter before holding off a late push. At the final buzzer, McDonald threw the ball high in the air and was mobbed by her teammates near center court. Then she shared a long hug with Barnes.

The small, but mostly pro-Arizona crowd at the Alamodome — the NCAA put limits on attendance because of the pandemic — chanted “U of A!” Arizona players came over to the loud rooting section, pointing to jerseys and waving hands up to get them to get louder.

“It was that grit,” McDonald said of the Wildcats’ defensive lockdown. “We didn’t want to go home once again, and we’re proving it. We’re locking down and we’re playing team defense. This is our identity, and we’re best at defense. Defense wins games and we did that tonight.”

Bueckers, The Associated Press player of the year, finished with 18 points and her 3-pointer got UConn within 60-55 in the final two minutes before Arizona closed out the win with free throws. Christyn Williams led UConn (28-2) with 20 points before fouling out.

UConn has no seniors in the lineup and started slow as the Huskies looked tentative in the role of favorite. McDonald and the Wildcats looked primed for their moment after being left out of the NCAA’s Final Four promotional video on Twitter that had featured the three other teams but not them.

UConn had four early turnovers and missed its first five shots before Bueckers made a 3-pointer to settle the offense, but only temporarily. McDonald, opened the game with a 3-pointer, made another two minutes later, and scored eight as the Wildcats led 16-10 after the first quarter.

“I think we came out with the wrong mentality. I thought we thought it was going to be easy, I guess, and we got flustered,” Williams said. “They had great ball pressure, it wasn’t like anything we’ve seen before this season. And we just couldn’t get in a flow offensively.”

McDonald pumped in two more from long range in the second quarter and the Wildcats led 32-22 at halftime. Bueckers was struggling to get any looks at the basket and finished the half with just four shots and three points.

McDonald cooled off in the third with just two points on two free throws. But she delivered big points late, and her 3-point play in the final four minutes of the fourth put Arizona up by 10.

Auriemma, who has coached the national player of the year 12 times at UConn, gushed over McDonald’s performance.

“Aari McDonald, I said going into the game that I don’t think we’ve had to play against a guard as good as she is, and she proved it tonight. She just dominated the entire game, start to finish,” he said.

After the loss, Bueckers was already looking to the future and the lessons that might be learned from the Huskies’ fourth consecutive defeat in the national semifinals.

UConn had nine turnovers in the first half and just eight made field goals. The 10-point halftime deficit was their largest in the NCAA Tournament since 2007 when the Huskies lost in the Elite Eight by 23 to LSU. When Arizona’s Helena Pueyo made a jumper in third to put the Wildcats up 14, it was UConn’s largest deficit this season.