NICOLAS PEPE inspired Arsenal to a brilliant comeback win despite Mikel Arteta fielding a weakened side.

The Ivorian, Arsenal's club-record £72million signing, played a key role in all three goals as the Gunners maintained their European push. 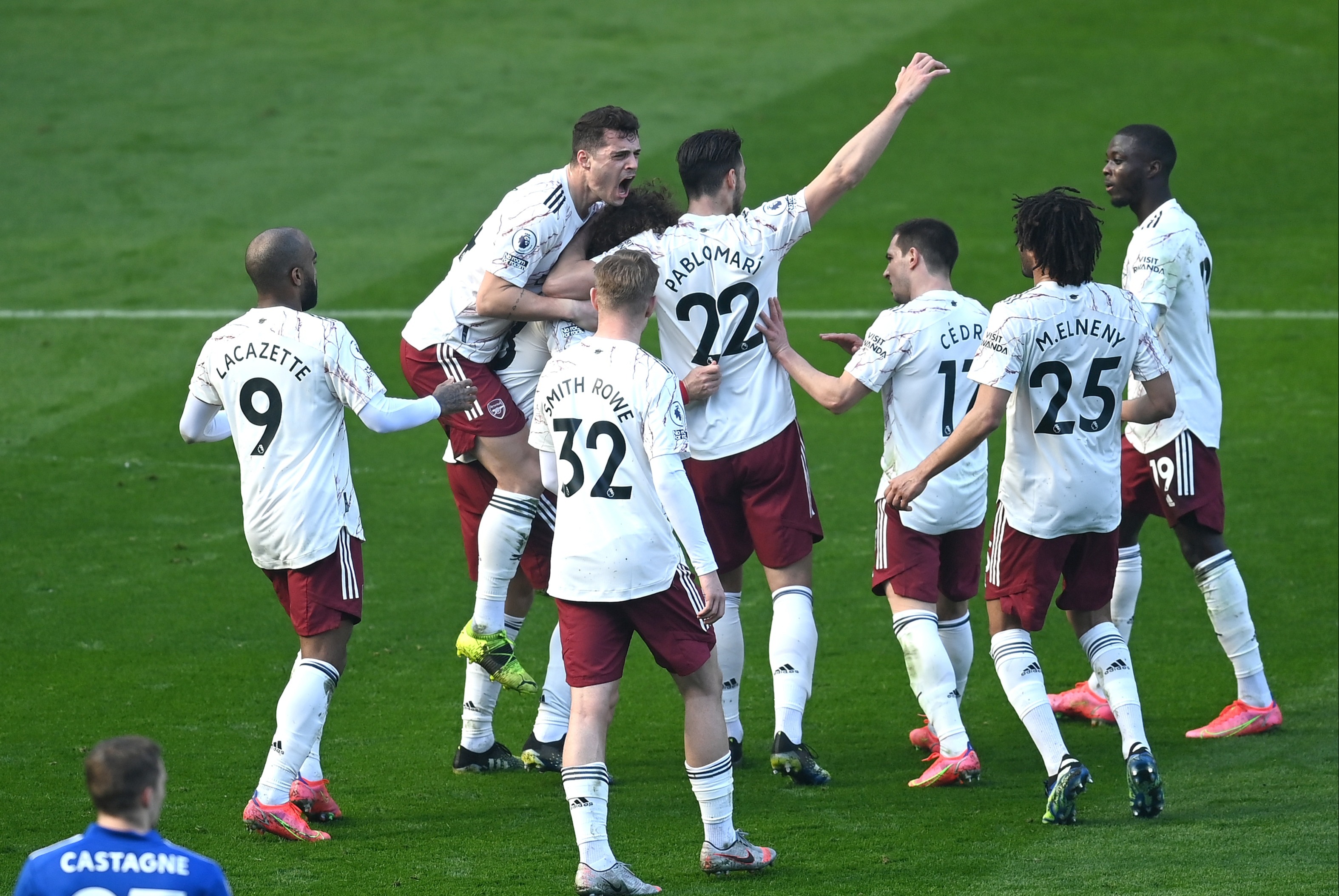 The visitors fell behind early on through Youri Tielemans before David Luiz and Alexandre Lacazette turned the game around.

Pepe then added the icing on top of the cake to throw Leicester's Champions League ambitions in doubt.

Almost gifted Leicester a goal with a howler but was let off the hook. Dealt with a couple of long-range efforts comfortably and had little else to do.

A quiet game on the right although launched himself into a couple of crunching tackles.

Reluctant to get forward unlike Tierney allowing Pepe to have more freedom in attack.

Scored a terrific header to bring Arsenal back into the contest.

Added calmness to the defence after the early set-back and read the game brilliantly at times. Certainly one of his better days. 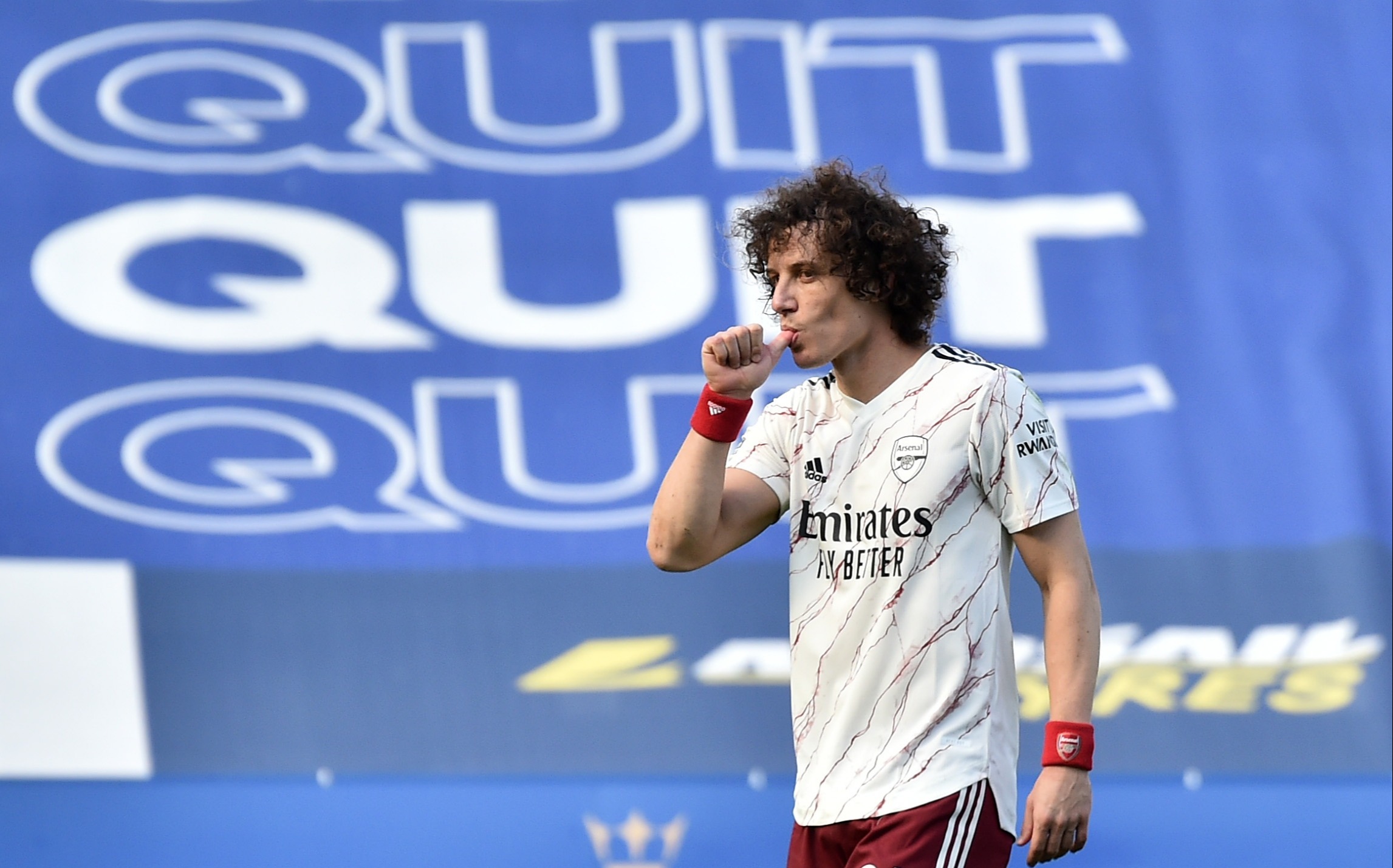 Didn't cover himself in glory for Leicester's opener. Ran away from the ball to cover Jamie Vardy allowing Tielemans plenty of space to fire in the goal.

Confidence grew as the game went on and dealt with Vardy's presence and pace.

Couldn't be blamed for Leicester's goal despite it coming down the left.

Barely gave his opponent a sniff and was a continuous outlet out on the flank contributing to their attacking play.

Had a stinker for the opener. Conceded possession cheaply and lacked the pace to track Tielemans.

Improved as the game went on and dictated the play as Arsenal stamped their authority on the contest. 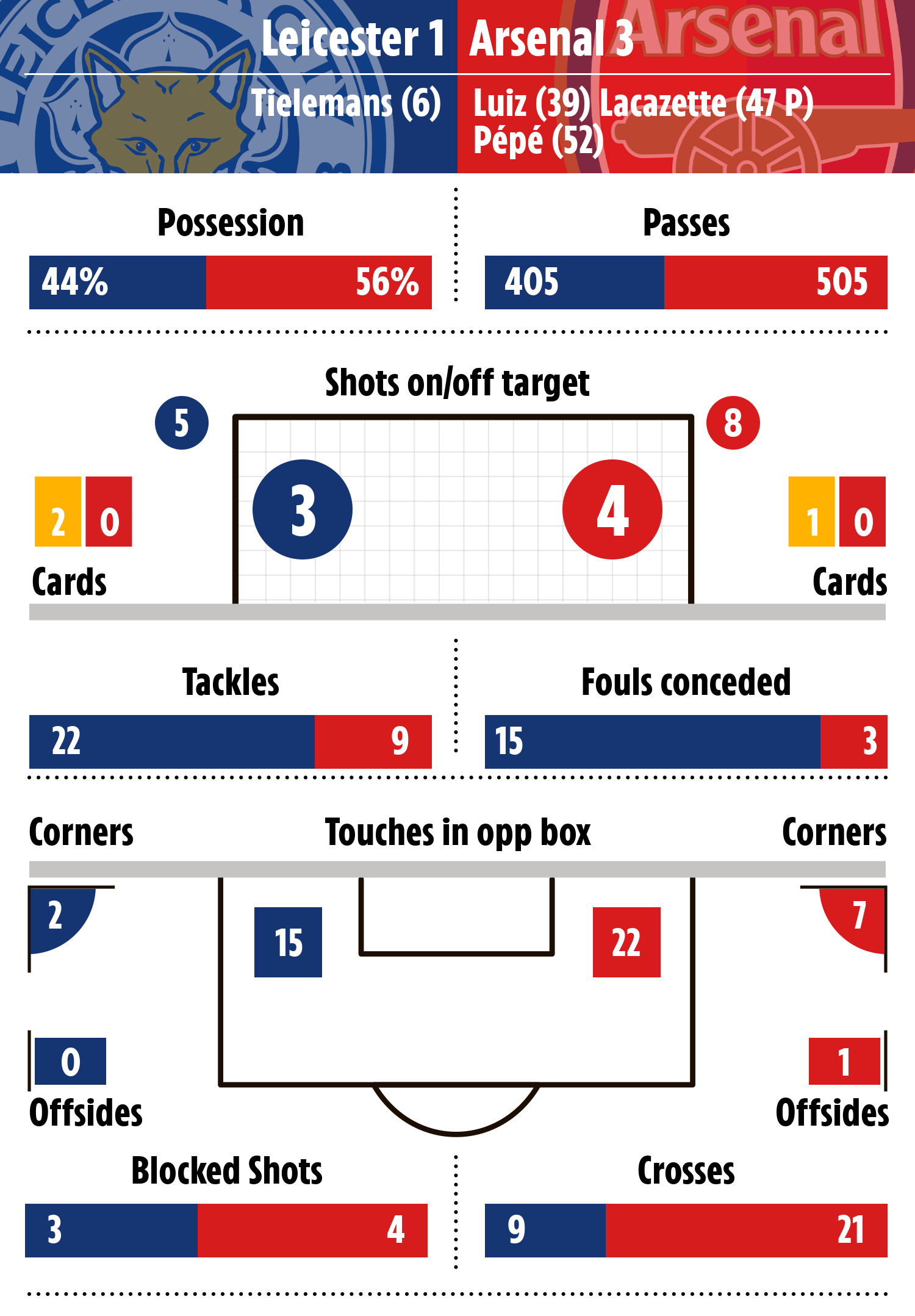 Lots of running, lots of energy in midfield and does the simple things without producing anything spectacular.

Leicester looked tired after their Europa League game and Arsenal exploited it with Elneny's liveliness.

Replaced by Thomas Partey on 65 mins.

Undoubtedly his finest performance for Arsenal. Played a key role in all three goals including scoring the first.

Lively in the first half, thought he won his side a penalty with his quick feet but was overruled by VAR. Won the free-kick that earned Arsenal's equaliser.

Leicester couldn't deal with him. 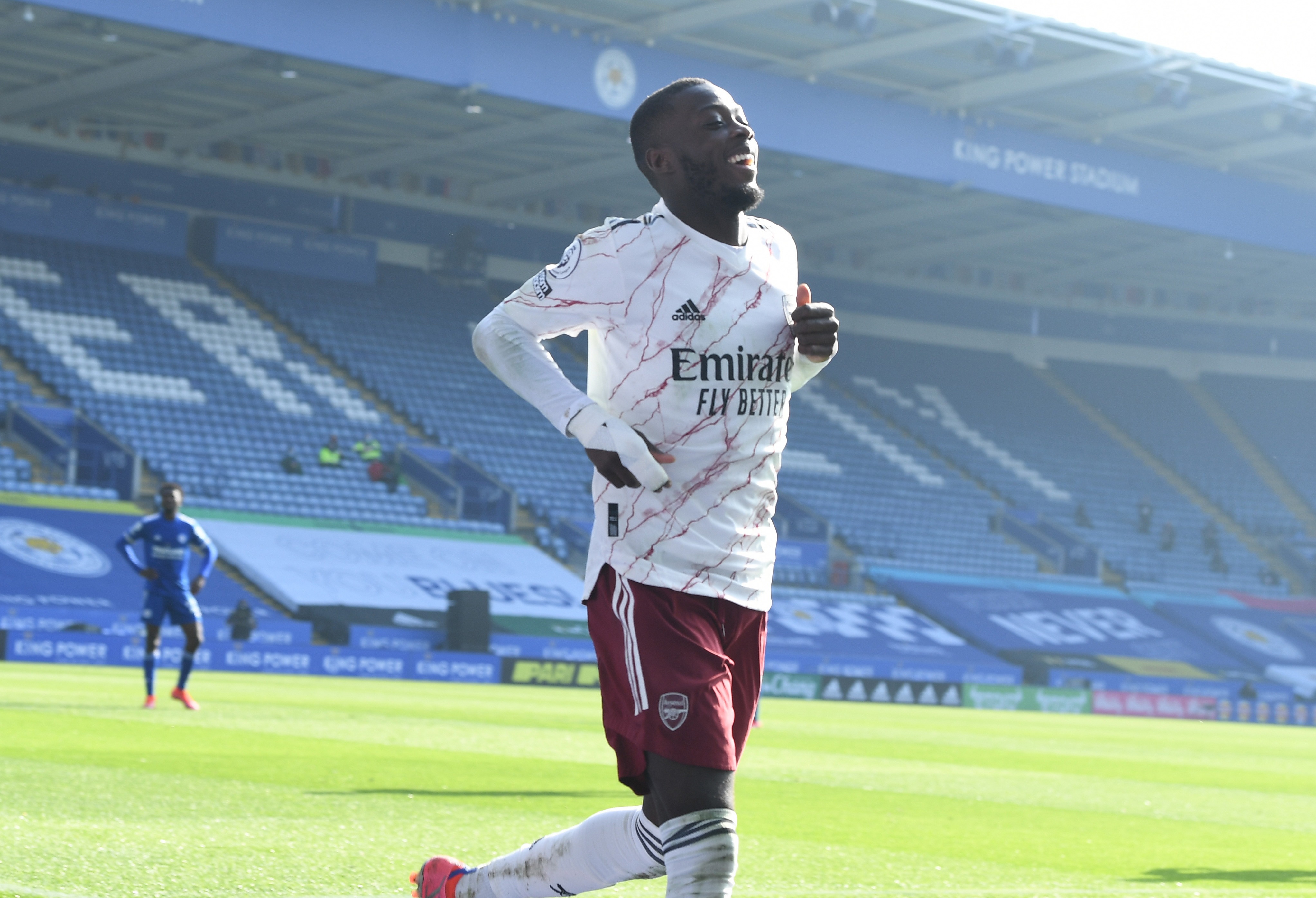 Showed glimpses of his quality without posing too much of a threat.

Was forced off with injury on 40 mins, replaced by Martin Odegaard.

Much better showing in the first half compared to what Arsenal fans are used to seeing.

Showed his pace and energy to break through the midfield, assisting David Luiz's header with a decent delivery.

Quieter in the second half but a lot more positive from the Brazilian.

Clinical from the spot to fire Arsenal ahead at the end of the first half.

Impressive link-up play with Pepe in particular that caused problems in Leicester's defence.His strength and hold up play were crucial. 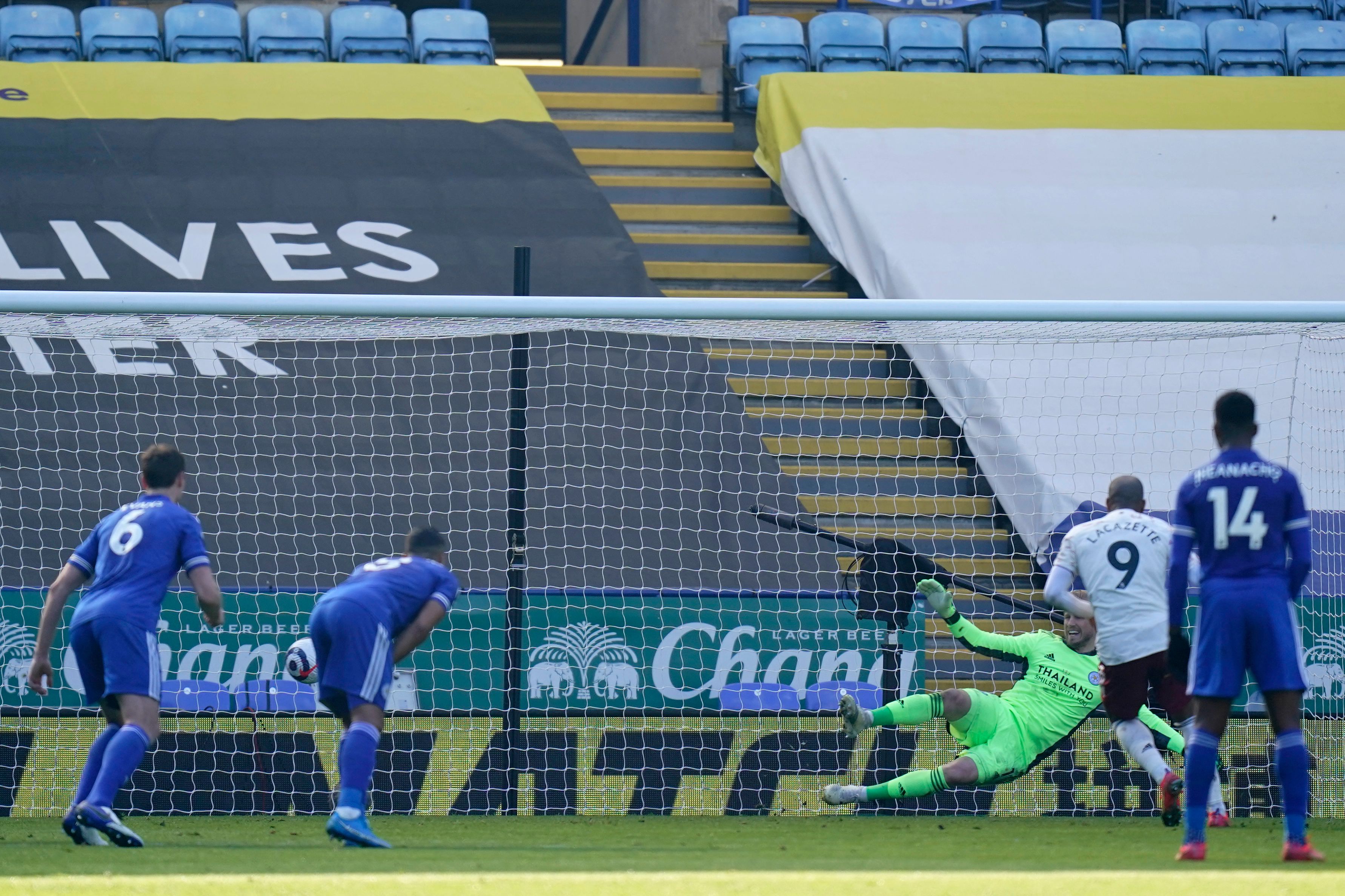 Proved he has the ability to perform in the Premier League. Showed quick feet and played a role in Arsenal's third.

Came on for the last 25 minutes on his comeback from injury. Was comfortable without having to deal with Leicester's pressure.