Australia pressured to step up climate action during G7 talks

Australia was again called upon to commit to a 2050 net-zero target and increase its near-term emissions reduction goals during a meeting of the Group of Seven wealthy nations attended by Foreign Minister Marise Payne this week.

A UK government official with direct knowledge of the talks in London said one of the reasons Australia was included in the so-called G7 Plus meeting was so climate could be addressed, and that pressure was brought to bear on Australia to increase its climate action. 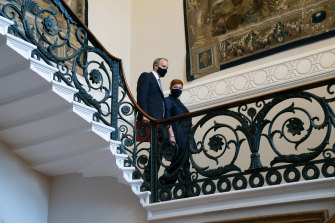 British Foreign Secretary Dominic Raab with his Australian counterpart, Marise Payne, at his residence in London on Wednesday.

It was made clear to Australia during the meeting that the UK, as host of the COP26 United Nations climate talks in Glasgow in November, expected to see all OECD nations commit to achieving net-zero emissions targets by 2050, said the official, who could not be named as they were not authorised to speak publicly.

The UK also wanted to see Australia improve on its current 2030 target of reducing emissions by between 26 and 28 per cent and assist in the global effort to raise financial assistance for developing nations to respond to climate change.

The UK currently holds the G7 presidency and is expected to use the G7 leaders’ summit in June, to which Australia has also been invited, to again push for more climate action in the lead-up to COP26.

The official said the UK cabinet was unified in its support for the ambitious 78 per cent reduction by 2035 target recently announced by Prime Minister Boris Johnson, which has won opposition and public support.

The official said treasury officials present at the UK cabinet committee meeting in March at which the 78 per cent target was first proposed by Alok Sharma, the cabinet-level official who is to be the formal host of COP26, said the target was achievable but warned it would be difficult to meet and would require determined action from all departments.

“It’s a big number, are you up for this?” Mr Johnson asked the meeting. All the ministers present voiced their support for the target, the official said.

According to the official, the UK government was aware that in Brexit it had recently been through a painful political process to assert its national interest. It therefore understood Prime Minister Scott Morrison’s stated determination that his government’s climate policy would be set in Australia rather than international forums, and in the national interest.

But the official said the UK hoped to convince Australia it was in its national interest not only to help ameliorate the impacts of climate change but to reap the economic benefits of joining the race to decarbonise advanced economies.

Australia was not invited to address the UK’s climate ambitions summit in December because it did not have a new, more ambitious 2030 commitment to announce. Last month, Mr Morrison addressed and defended Australia’s “technology not taxes” approach to climate change at a climate summit hosted by US President Joe Biden.