THE rusted and collapsed carcass of a yellow saloon car, abandoned in an olive grove and shrouded in 20 years of Greek weeds, sums up the island of Paxos.

It is a bit of a rigmarole getting a car, or spare parts, to this craggy outpost reached only by ferry from Corfu, so many a motor arrives never to leave. 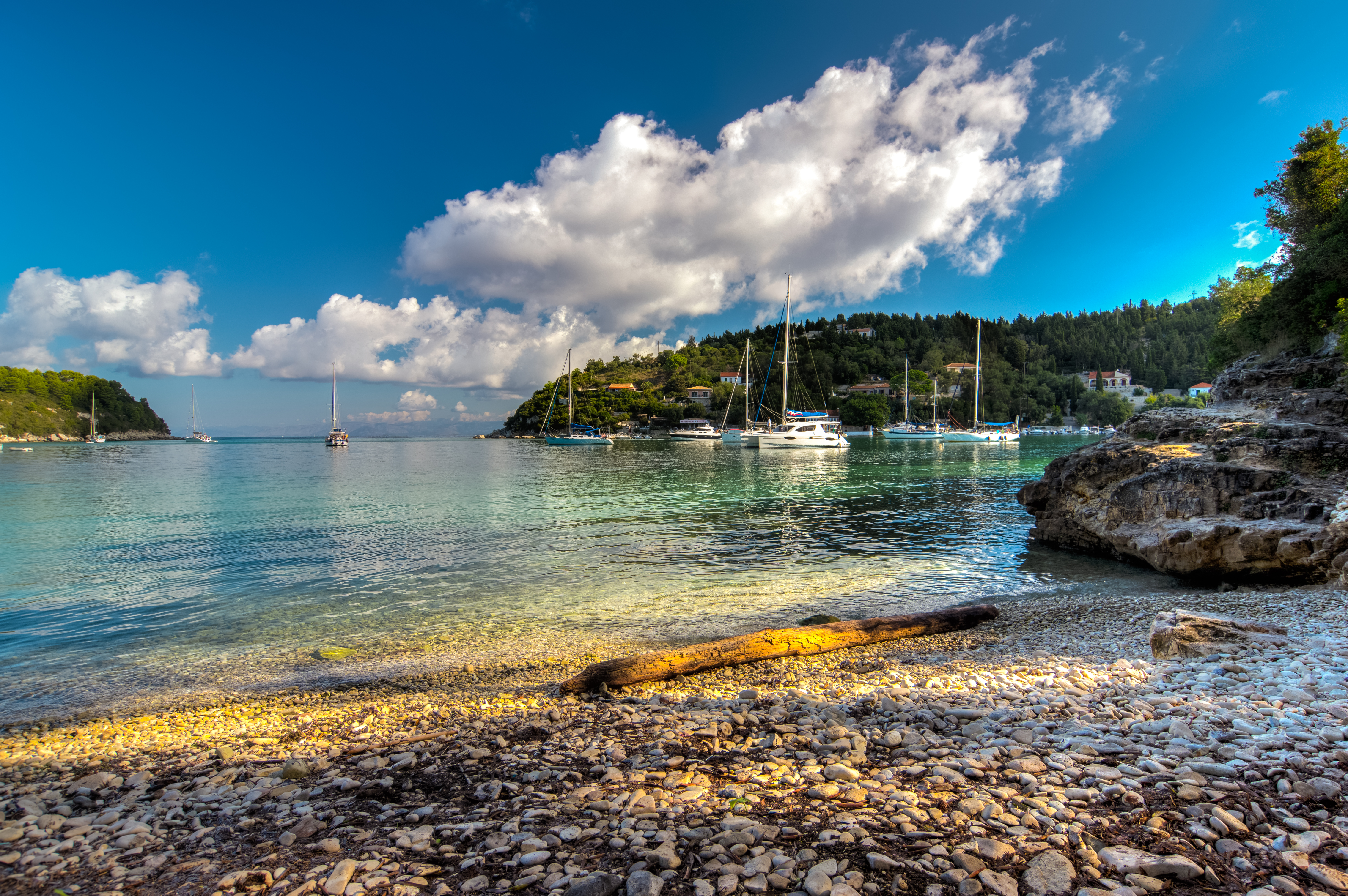 Much like a fair few smitten tourists dream they could.

Picturesque bangers now stand as quirky waymarks for ramblers: “Left at the old Volkswagen van then straight on along the goat path until you get to the Trabant three-wheeler.”

Paxos may be where motors go to conk out but is also where travellers swerving mass tourism go to wind down through the gears to a slothful stop.

In Roman times, Antony and Cleopatra enjoyed a cosy meal-for-two here before the Battle of Actium — and likewise it caught the eye of my wife Nicky and I as a treat trip for our 20th wedding anniversary. 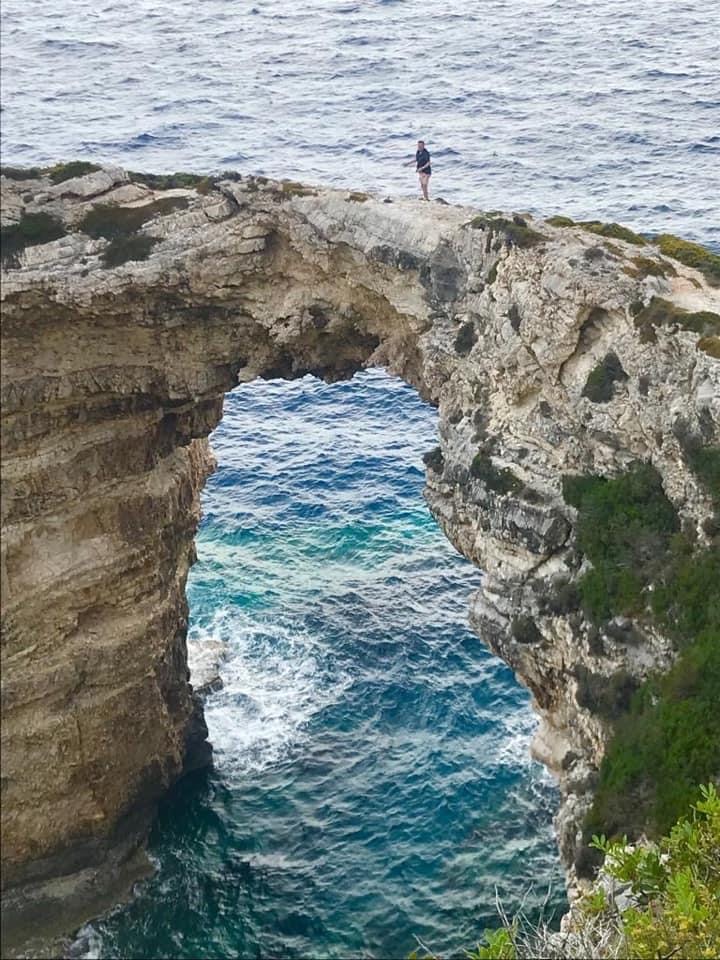 But sloth is, indeed, the byword. The comically posh elderly Brit we met at the beach on our first morning had clearly read the script and was up to speed, or rather down.

When I enquired what he and the missus had planned for the day, he told me: “F awwl, old chap, then a spot of lunch and then, well, F awwl.”

You bump into people on Paxos because it is so small and we ran into Mr F Awwl on many an occasion — break-fasting at the bakery, collapsed on the beach, lunching in a taverna or guzzling by the harbour. Always a laugh. “Where’s your villa?” I asked him one night. “Up that hill, old chap . . . next to the moon.”

The itsiest of the main Ionian Islands — eight miles by two and with just three villages, Gaios, Lakka and Loggos — Paxos is about an hour on the boat from the tourist hordes of Corfu but light years apart. 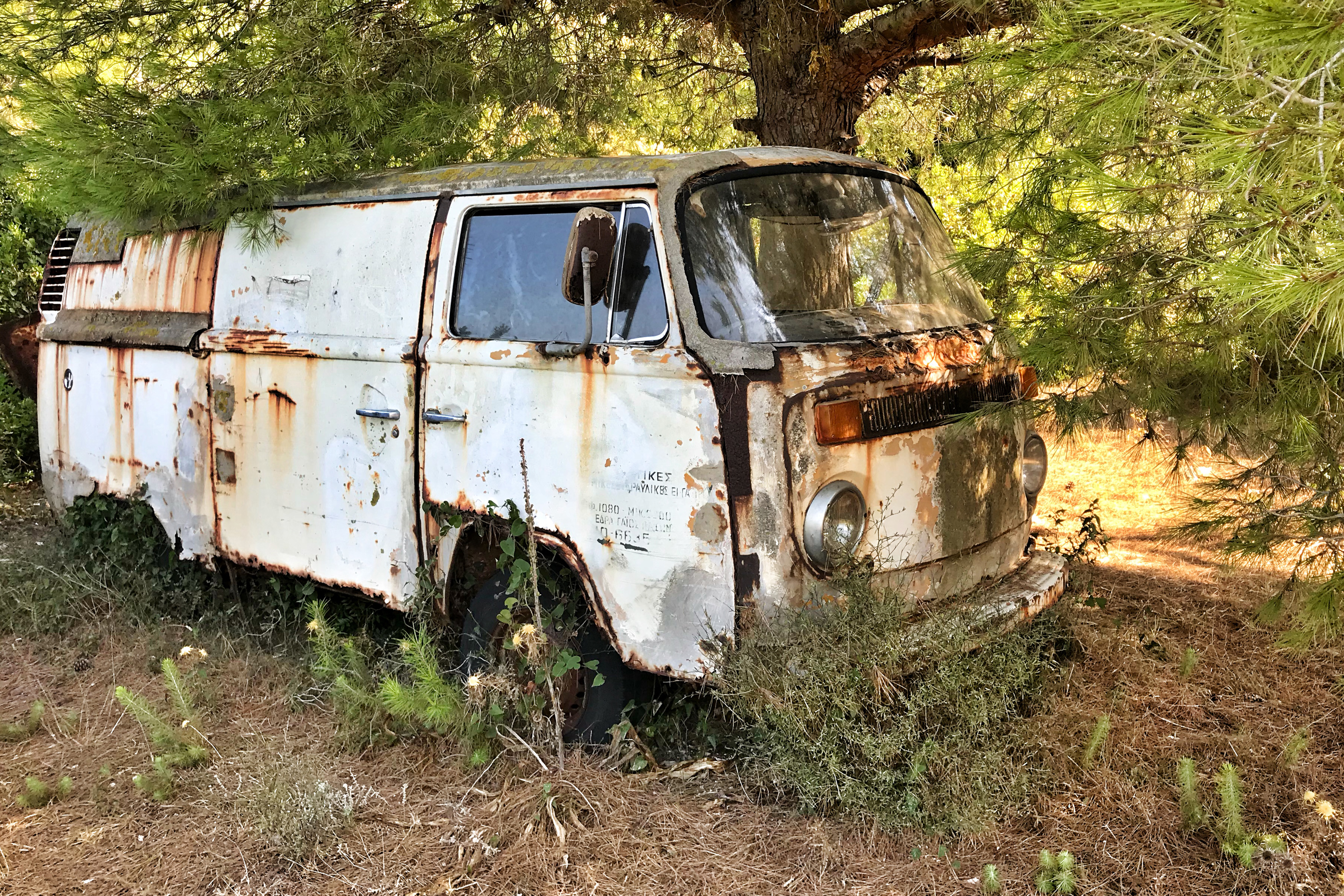 There are few sandy beaches to speak of. But instead, you flop into the sea off dreamy limestone platforms with gurgling spouts, or from sleepy, olive-fringed pebble and shingle beaches — many of them reached only by foot or rental boat.

We had our own Castaway-style shingle beaches, Levrechio and Marmari, two minutes’ stroll from the grapevined veranda of our simple but comfy rental cottage on the edge of Loggos where people give way to olive groves.

Our lodge was one of a cluster of four owned by local group Dandelion Villas and was all ours for £500 for the week last September.

Both local beaches became favourite hangouts — especially Levrechio for its Bouloukos taverna where you sit under, yes, more olives, tune in to the tide and fill your face with homemade tzatziki, chips and bread, wondrous whitebait and great slabs of feta cheese while getting slowly sloshed on the local white. 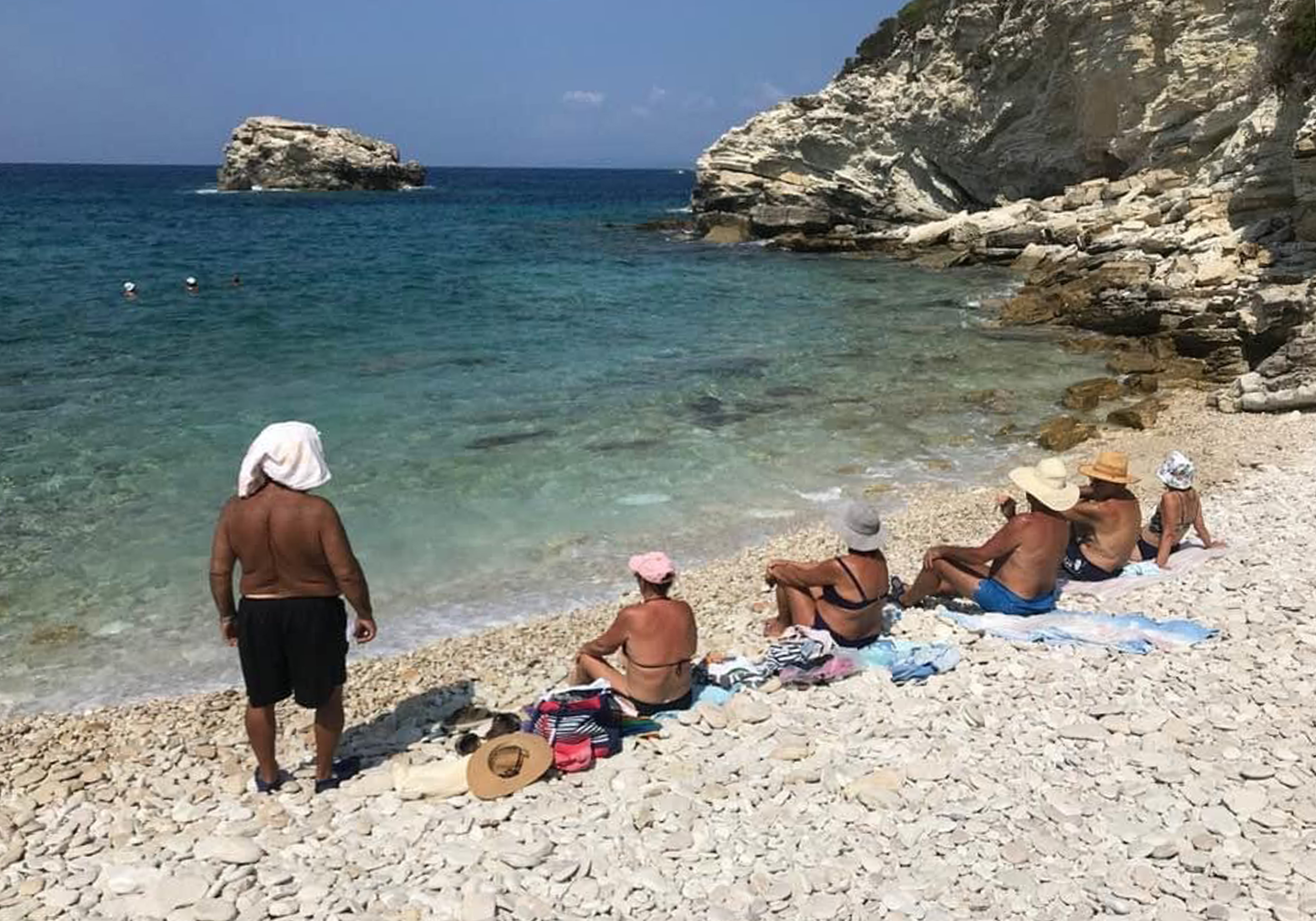 But when you tire of relaxing, pull on your trainers and a ramblers’ wonderland awaits.

Tiny foot, donkey and goat paths lead you back through the mists of time. Twisty Venetian olive trees, up to 40ft high, arch in ghostly, dappled light over Byzantine former grain terraces. You stop and imagine the toil — but not for long enough to feel guilty.

In England, every good walk includes a pub. On Paxos, the reward is to stumble upon one of the many hidden beaches or, on the wild west of the island, XXXL cliffs and epic rock formations.

One of the sights he invites you to behold is the Tripitos stone arch towering hundreds of feet over the Med, which daring types tip-toe across from a steepling cliff path.

GETTING THERE: Many budget airlines fly to Corfu. Return Corfu-Paxos ferry, with Kamelia Lines, is about £30pp (kamelialines.gr)

THINGS TO DO: Panos boats, on Loggos harbour, hire out canopied speedboats for about £50 plus petrol.

STAYING THERE: Dandelion Villas’ Eleni cottage, with one bed, shower and kitchenette, is from about £60 a night in low season, based on two sharing, rising to just over £100 in August. See dandelionvillas.com or phone 0030 6988 377909.

“No, you’re not!” blared the missus. So I did — and got her to take the shot. Truth be told, it is not as scary as it looks — there would be room to drive a Trabant across. But never let the truth get in the way of a good Facebook picture.

We also answered Mr Bleasdale’s call to top-secret Kipos beach, accessed only by footpath, and got picturesquely lost amid pine glades and, yes, olives again.

This dreamy shingle shore, lapped by tranquil turquoise waters and completely deserted, was worth every bit of the earlier spousal sparring in the woods over whether to head left, right, backward, forward or round in circles. 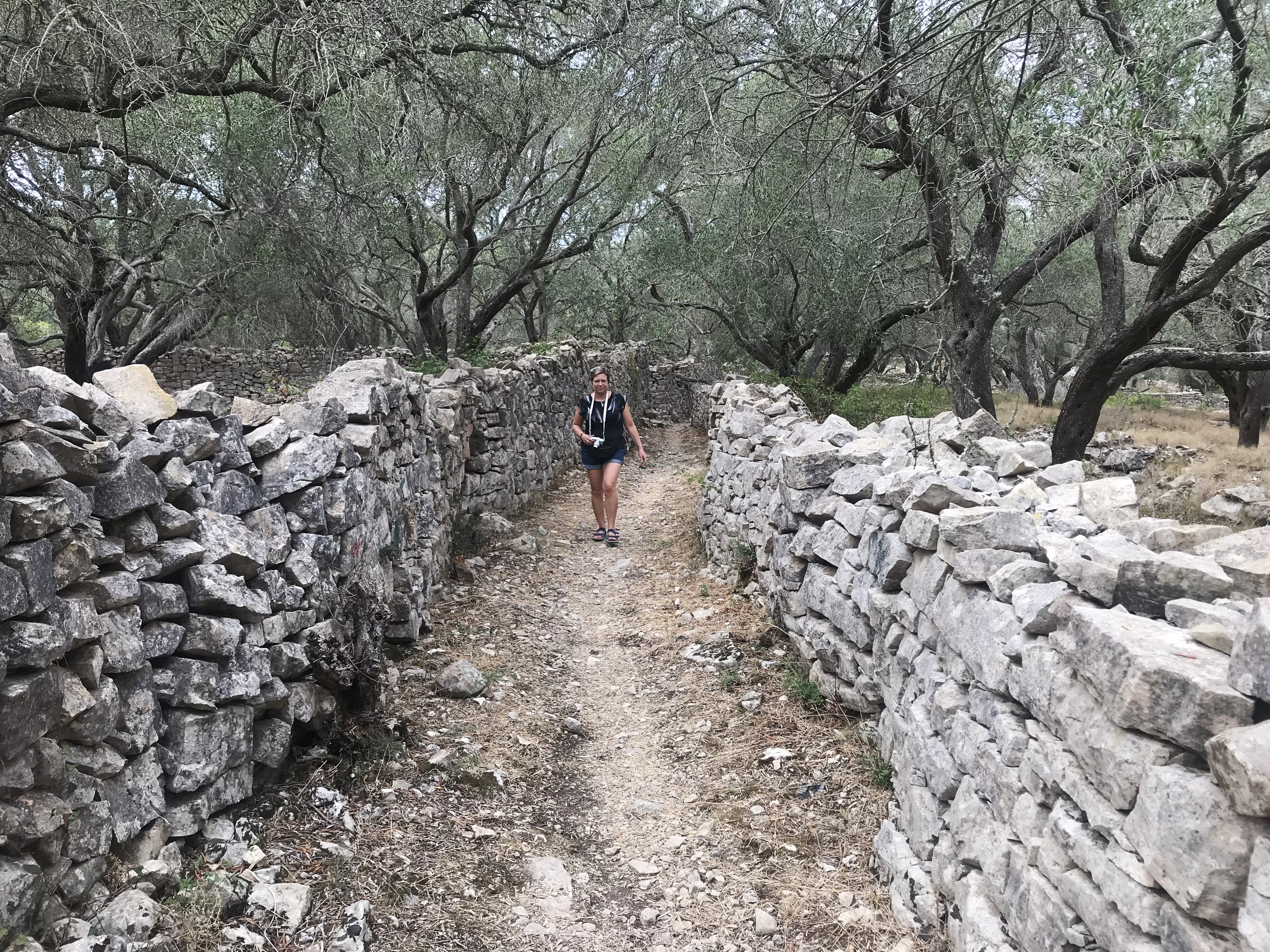 But surely the most magical way to explore the Paxos coast is by rental motorboat — a must for even the most inveterate of holiday lazybones.

We hired our canopied launch from Loggos master mariner Panos — about £50 for the day, plus petrol.

After stocking up on a picnic from the excellent Martha’s bakery and cafe in Loggos, and a quick driving lesson from Panos, we embarked on our Poseidon adventure. A day is plenty to circumnavigate both Paxos and its even tinier sister islet of Antipaxos.

The latter has one thing Paxos has little of, sand, and its blindingly white beaches of Voutoumi and Vrika are famed across the Med. 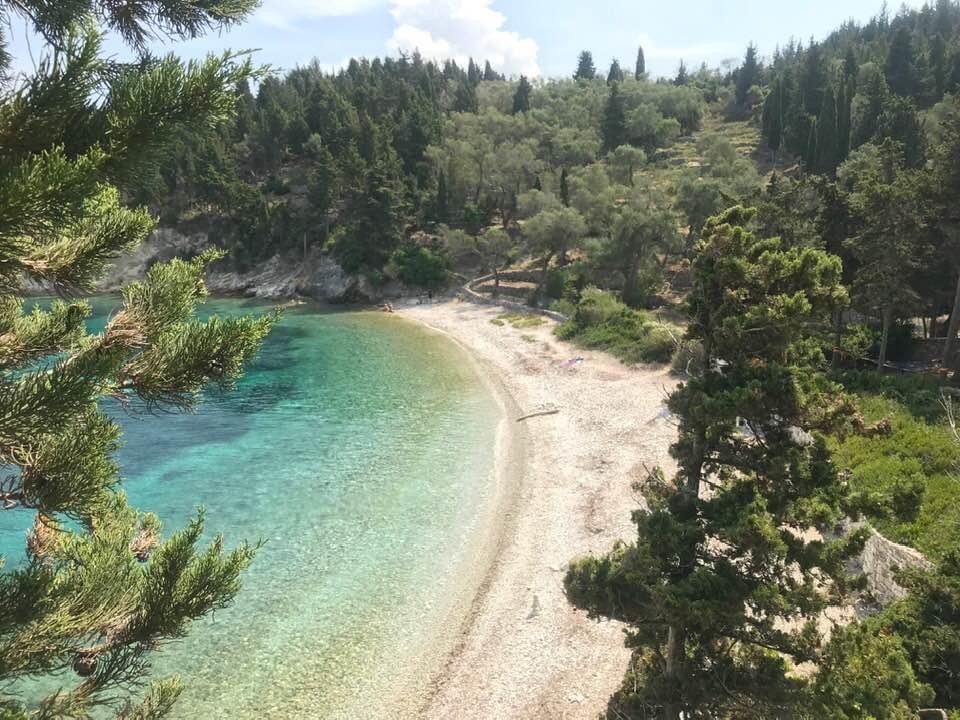 They do get busy with tour boats from Corfu but, with our own little chug-along, we were able to skit along the coast like pirates to discover our own little treasure coves.

Dropping anchor, then paddling ashore with picnic, towels and camera stashed in a blow-up Mickey Mouse float was great fun — if not very pirate-like.

Back in Loggos that evening, we ate like ravenous sea dogs.

But beware — the six or so tavernas on the harbour, quaint as they are and serving scrumptious seafood, do hit you up for London prices. 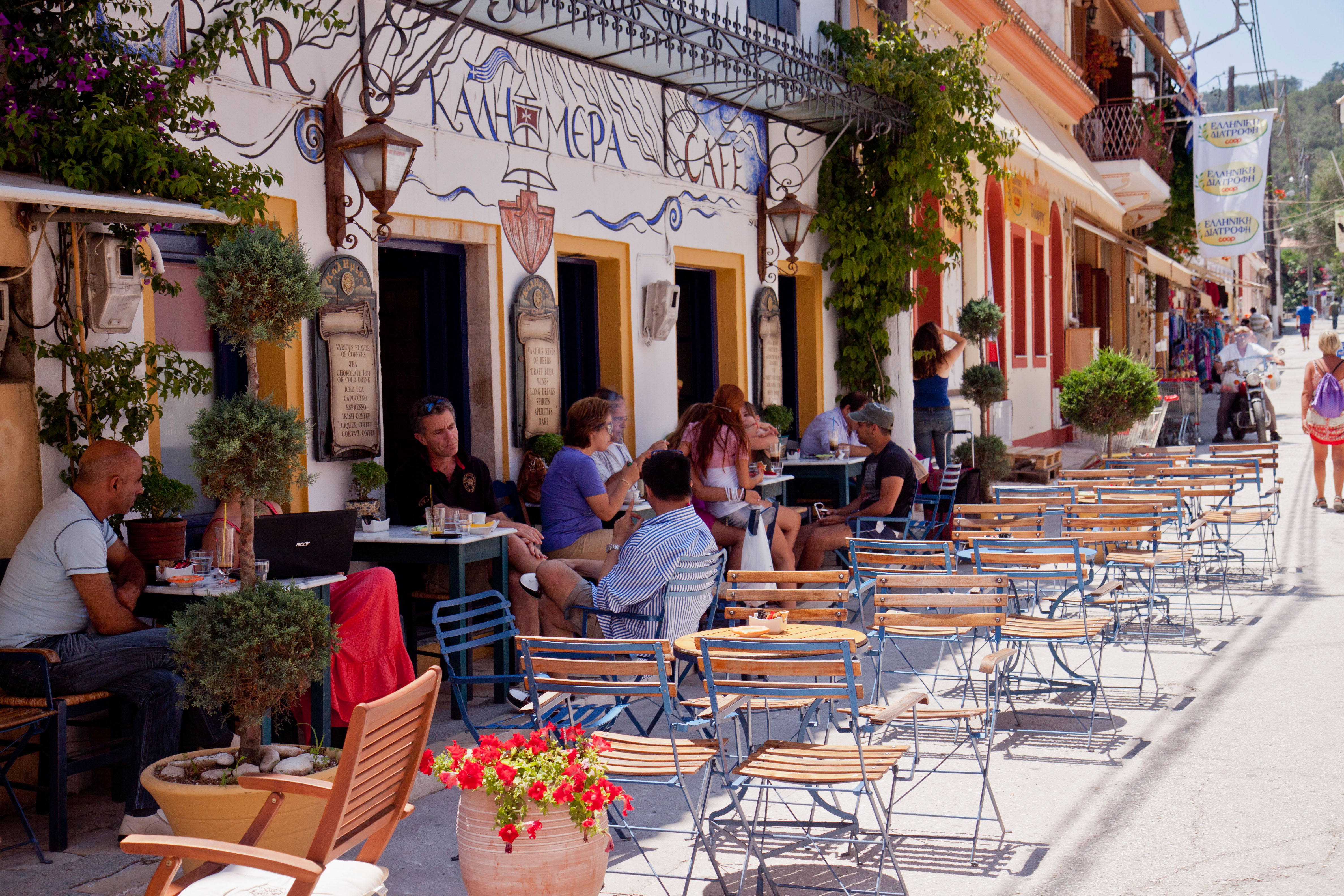 Up a side street, the friendly, family-run Four Seasons is cheaper — and cheerful.

We also saved by ordering wine by the carafe, instead of bottle.

Best of all, however, one evening we left behind the hubbub of the harbour and took a taxi inland to the tiny hamlet of Magazia.

At the family-run Lilas restaurant, we feasted on fabulous local fare at a far more palatable price, and zoned out to the night stars, chirpy crickets and playful local cats.

I cannot remember if it was near the old Trabant or Volkswagen camper. One of the two, probably.