A tiny beetle that attacks ragweed plants and stops them from flowering ‘could be the key to relieving millions of hay fever sufferers of their symptoms,’ experts said.

By damaging the plants enough that they can’t release pollen, the humble leaf beetle — or ‘Ophraella communa’ — could reduce airborne ragweed pollen by 82 per cent.

If allowed to grow normally, a single ragweed can produce around a billion individual grains of pollen in a flowering season — and they are a main cause of hay fever.

The findings could help relieve the symptoms of more than two million people’s allergies in Europe — while saving on £0.87 billion ($1.07 billion) in health costs. 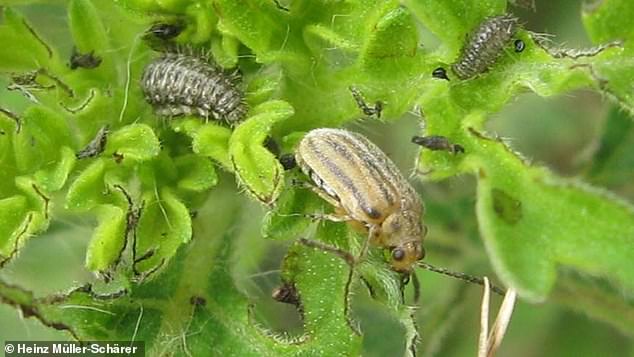 The tiny leaf beetle, pictured, attacks ragweed plants and stops them from flowering — and ‘could be the key to relieving millions of hay fever sufferers of their symptoms,’ experts said

‘The leaf beetle Ophraella communa can significantly reduce pollen from common ragweed, or Ambrosia artemisiifolia,’ paper author Urs Schaffner of the Centre for Agriculture and Bioscience in Switzerland.

Ragweed pollen, she added, ’causes a range of symptoms — from sneezing to itchy eyes and aggravates conditions such as asthma and eczema.’

Dr Schaffner and colleagues’ study was the first to quantify the economic benefits of using biological control measures in Europe.

The team argues that the costs inflicted by invasive plant species like ragweed in Europe are ‘most probably seriously underestimated.’

Countries in the Balkan Peninsula — such as Bulgaria, Romania and Serbia — will benefit most from using leaf beetles as form of biological control, they added.

Prior to the accidental arrival of the leaf beetle in Europe in 2013, some 13.5 million people suffered from ragweed-induced allergies across the continent, causing economic costs of around €7.4 billion (£6.5/$8 billion) every year.

In Europe, common ragweed is considered invasive in more than 30 countries and its spread and impact is only likely to increase as climate change causes global temperatures to rise.

Field studies in Italy showed that the leaf beetle can reduce ragweed pollen by 82 percent.

In the Milan area, where the beetle was first detected, up to 100 per cent of ragweed plants were attacked — with the damage caused enough to prevent the plants from flowering and causing pollen to be released.

‘Our study provides evidence [not only] that the impacts of common ragweed on human health and the economy are so far highly underestimated,’ said Dr Schaffner.

‘But that biological control by Ophraella communa might mitigate these impacts in parts of Europe.’

‘We propose that future assessments of the economic impacts of Invasive Alien Species (IAS) should more thoroughly consider costs related to human health.’

In their research, the team used information from the European Pollen Monitoring Programme to map seasonal total ragweed pollen integrals in Europe during both 2004 and 2012 — before the introduction of the leaf beetle.

They then looked at data from 296 pollen monitoring sites across Europe.

To validate the estimated number of patients suffering from ragweed pollen allergy, the researchers compared their findings with detailed healthcare data from the Rhône-Alpes region in southeastern France.

They then weighted the treatment and lost work-time cost at the country level using purchasing power parity, adjusted health expenditures per capita for 2015.

This was to determine the overall economic costs of healthcare needed to treat the symptoms and other effects of ragweed pollen. 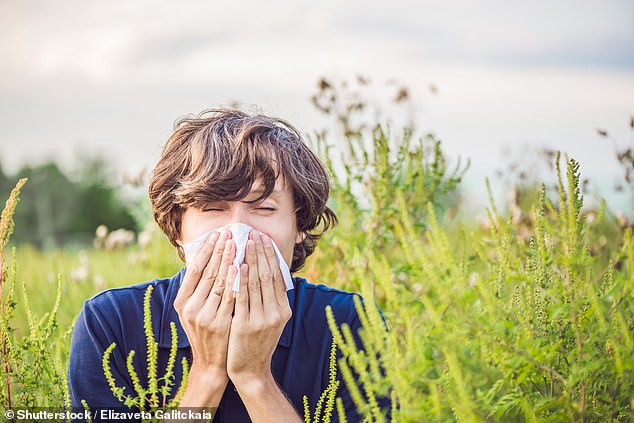 If allowed to grow normally, a single ragweed can produce around a billion individual grains of pollen in a flowering season — and they are a main cause of hay fever

‘We were not sure as first whether the leaf beetle was useful or harmful,’ said paper author and biologist Heinz Müller-Schärer of the University of Fribourg, Switzerland.

‘Laboratory tests had shown that it was possible that it was harmful to sunflowers. However, field tests in China and Europe could not confirm this finding.’

The full findings of the study were published in the journal Nature Communications.

Hay fever is an allergic reaction to pollen, a fine powder which comes from plants. There is more pollen in the air in the spring and summer when plants are flowering.

The reaction usually happens when pollen comes into contact with someone’s eyes, nose, mouth or throat.

People suffering from the allergy can put Vaseline around their nose to trap the pollen, wear wraparound sunglasses to keep pollen out of their eyes, wash clothes regularly and vacuum and dust indoors.

Avoiding grass, cut flowers and smoke can help reduce symptoms, as can drying clothes indoors where pollen is less likely to stick to them.