Home » Lifestyle » ‘Being a mother of a boxer is extremely nerve-wracking,’ Danny Garcia’s mom said ahead of Errol Spence Jr. fight

‘Being a mother of a boxer is extremely nerve-wracking,’ Danny Garcia’s mom said ahead of Errol Spence Jr. fight 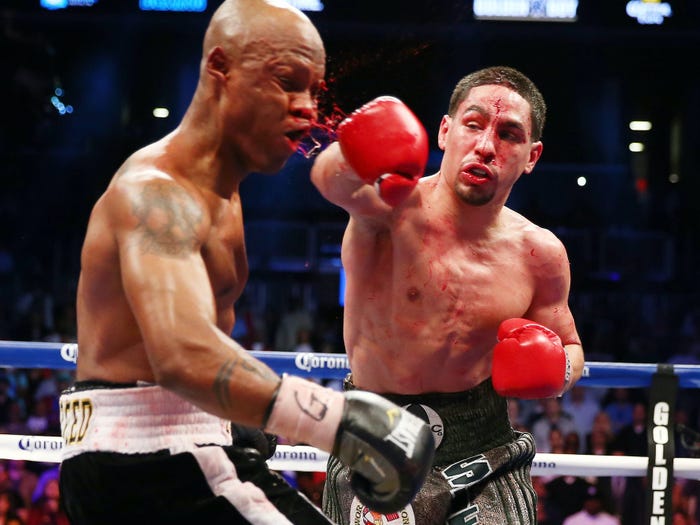 As a two-weight world champion, the fighter has been a staple of the elite boxing scene for the last decade, having shared the ring with Erik Morales, Keith Thurman, and Shawn Porter.

He returns to the ring this weekend, challenging Errol Spence Jr. for the unbeaten American's IBF and WBC championships.

Maritza Garcia will be traveling to the fight at the AT&T Stadium in Arlington, like she does for all of his fights, but said at a public workout last week that she experiences conflicting emotions while watching him compete.

"Being a mother of a boxer is extremely nerve-wracking, even though I'm really proud of him and wish him the best, it tears me apart to see my son box."

Maritza said despite all that, she's not missed one of his 38 pro bouts. "I go to all his fights," she said.

"Danny always works hard," she added. "To me, it's about the same, but he tries to work harder for every fight."

Danny has kept his family close throughout his life and career, and he's even trained by his father, Angel Garcia — Maritza's husband.

Angel is one of boxing's biggest characters

He has guided his son's career from the start to multiple world championship fights. He is also all too happy to engage in verbal confrontations regardless of whether that's with Danny's opponents or media members he thinks asked a silly question.

A self-described "mother f—– from the hood," the mid-50s boxing coach has previously said he grew up at a time in Philadelphia when Puerto Ricans like himself would endure racism simply for speaking Spanish.

He is known for his one-liners at press conferences, once said that modern society is too soft because people look at you funny when you "fart too loud," and can, at times, be politically incorrect.

"I know my husband is crazy," Maritza said. "And sometimes he gets in trouble because he says what he thinks, and I think you should not say what you think. But that's Angel, he's crazy, and nobody's going to change him."

Nobody will change Angel's unwavering belief in Danny, either — a fighter who has scored wins over Amir Khan, Zab Judah, Lucas Matthysse, Lamont Peterson, and, more recently, Ivan Redkach.

"We had a great camp," Angel said this week. "We left everything in the gym. The job is done, and we're here now.

"Danny is going to go out there and show the world what a true champion is made of. Nothing is going to phase Danny heading into this fight. It doesn't matter what anyone on the outside is saying.

"Danny doesn't just know how to win. He knows how to kick your ass."

Though she'll be nervous, Maritza finished: "I'm very excited, and I know my son is going to be victorious."

The Premier Boxing Champions event will be broadcast on December 5 on Fox Sports pay-per-view in the US.