President Joe Biden said Monday that Belarus’s forced diversion of a Ryanair passenger flight and the subsequent removal and arrest of an opposition journalist is “outrageous” and “a direct affront to international norms.”

The president said that the U.S. “condemns in the strongest possible terms” both what international leaders have called a plane “hijacking,” as well as the arrest of 26-year-old Raman Pratasevich, the journalist who, along with his Russian girlfriend, was aboard the jetliner traveling from Athens to Vilnius, Lithuania, when it was forced to stop in Minsk, Belarus.

Biden’s statement comes on the same day that European Union leaders agreed to place sanctions on Belarus ― including banning the country’s airlines from using EU airspace. The leaders demanded that authoritarian Belarusian President Alexander Lukashenko immediately release Pratasevich and his girlfriend, Sofia Sapega, and called for the International Civil Aviation Organization to investigate what some see as an unprecedented move and potentially state terrorism or piracy.

“I join the many calls for an international investigation to ascertain the complete facts of the case,” Biden said. “I welcome the news that the European Union has called for targeted economic sanctions and other measures, and have asked my team to develop appropriate options to hold accountable those responsible, in close coordination with the European Union, other allies and partners, and international organizations.” 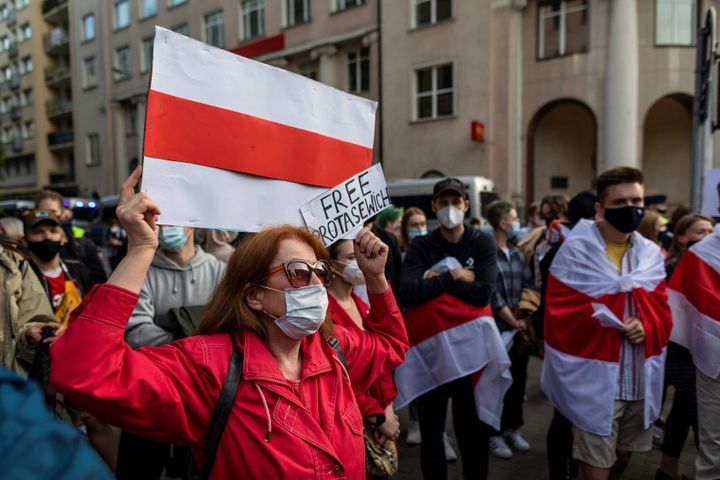 Ryanair said that Belarusian flight controllers ordered the crew to land the plane in Minsk after telling them that there was a bomb threat against Flight FR4978 as it was crossing through Belarus airspace on Sunday. A Belarusian fighter jet escorted the plane as directed by Lukashenko, and authorities removed Pratasevich and Sapega from the flight while refusing to say where the two would be held.

Passengers told The Associated Press that they recall Pratasevich being shocked when he realized the flight was diverted to Minsk, expressing worry that he would be killed for his activism. The Belarusian KGB in November put Pratasevich on a list of people suspected of being involved in terrorism. In Belarus, a terrorism conviction carries the death penalty.

At the same time as Biden’s statement, Sens. Dick Durbin (D-Ill.) and Marco Rubio (R-Fla.) jointly urged the president in a letter to direct the Federal Aviation Administration to prohibit U.S. airlines from entering Belarus airspace “in an effort to keep passengers and crew safe.” The two senators helped pass a bipartisan resolution in August 2020 calling for a free, fair and transparent Belarusian election, and introduced a resolution a month later condemning the violent response to peaceful protesters.

On Monday, Belarusian state television played a short video clip of Pratasevich, who ran a popular messaging app Nexta, which played a significant role in organizing protests against Lukashenko. The video showed Pratasevich sitting at a table with his hands folded in front of him while he spoke rapidly, saying that he was in satisfactory health and that his treatment in custody was “maximally correct and according to law.” He also said in the video that he was giving evidence to investigators about organizing protests.

“This outrageous incident and the video Mr. Pratasevich appears to have made under duress are shameful assaults on both political dissent and the freedom of the press,” Biden said. “The United States joins countries around the world in calling for his release, as well as for the release of the hundreds of political prisoners who are being unjustly detained by the Lukashenko regime.”

Lukashenko has aggressively ruled as the country’s first and current president for nearly 27 years, since the Belarusian office of the presidency was first established. Belarusian civilians took to the streets last year to protest against an election they say was rigged to extend Lukashenko’s reign. Police violently attacked protesters and arrested thousands, a crackdown that drew significant backlash from the West.

U.S. national security adviser Jake Sullivan spoke on Monday with exiled Belarusian democratic opposition leader Svyatlana Tsikhanouskaya to condemn the incident and assure that the U.S. will join other allies in holding Lukashenko accountable, citing the Biden administration’s demand for Pratasevich’s immediate release along with all political prisoners in Belarus. Sullivan also reiterated that the U.S. understands the need for free and fair elections under observation by the Organization for Security and Cooperation in Europe to resolve the current crisis in Belarus.

“For months, the Belarusian people have made their voices heard ― demanding democracy, respect for human rights, and the preservation of fundamental freedoms. I applaud the courage and determination of Belarusians fighting for basic rights, including journalists like Raman Pratasevich and opposition leaders like Svyatlana Tsikhanouskaya and her husband, Syarhey Tsikhanouski,” Biden said. “The United States will continue to stand with the people of Belarus in their struggle.”